YES! (Ypsilanti Experimental Space), a small room off Washington Street near Michigan Avenue, was packed with an audience of about 30 people. The leaders of Roustabout Theatre Troupe welcomed the crowd into the space with an open, relaxed vibe -- something that can be frustratingly hard to find in the sacred space of bigger or more traditional theater. 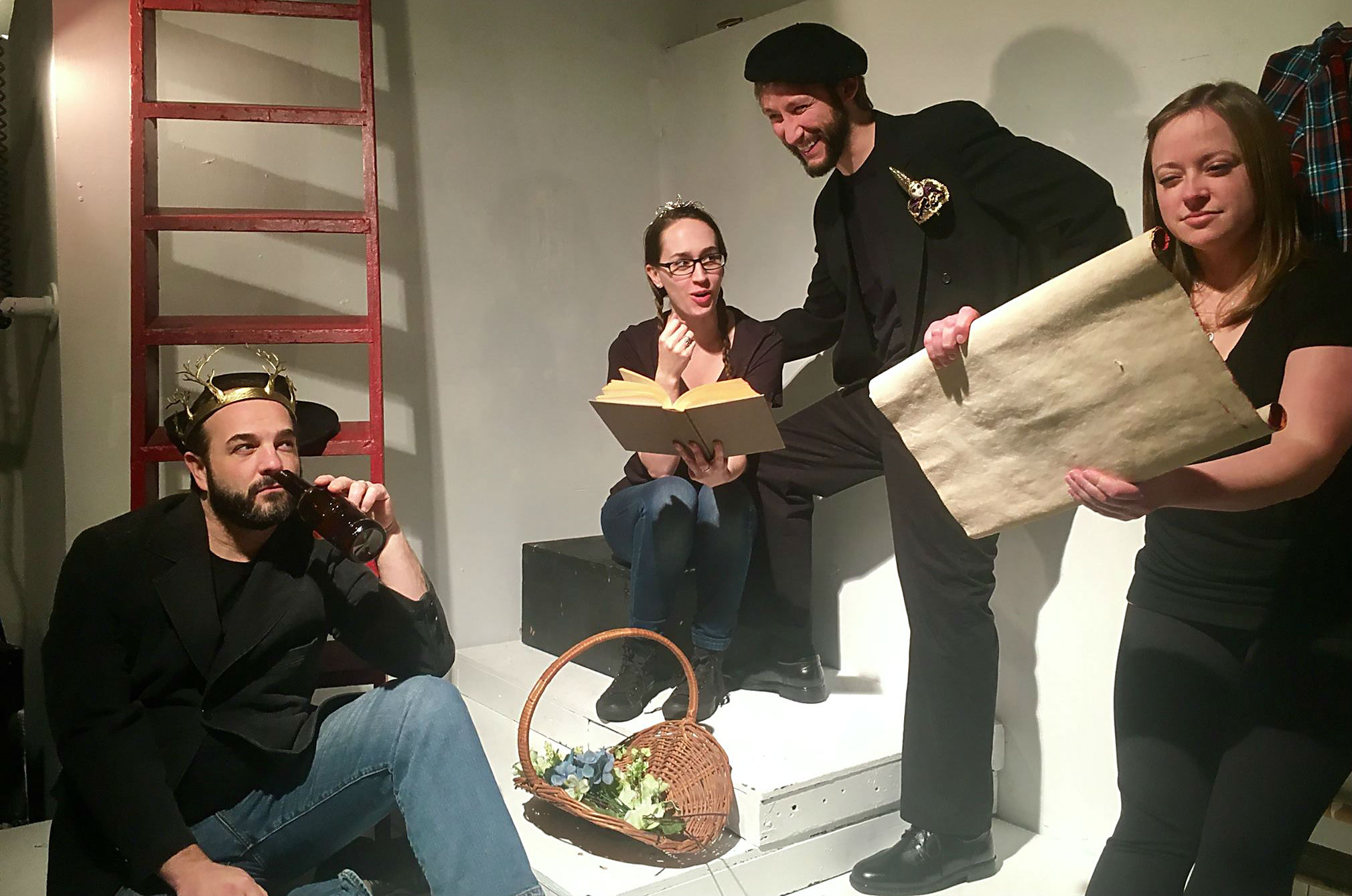 This fearsome foursome of Will Myers, Annie Dilworth, David Galido, and Jaclynn Cherry dove right into the Sexy Beast.

This four-person cast -- which played more than 40 characters -- reminded us, in a very amorous way, there is always something new to discover in the works of William Shakespeare. I expected to be beaten over the head with Romeo and Juliet scenes but was pleasantly surprised with the thoughtful arrangement of love-sick scenes and sonnets. The montage weaved in and out of snippets from All’s Well That Ends Well, The Tempest, The Merchant of Venice, and more.

Perhaps the most enthralling decision was to use the sonnets as transitions from scene to scene. These 140 syllable poems are underperformed treasures. Sexy Beast was co-directed by Roustabout Artistic Director Joey Albright and Managing Director Anna Simmons, and she also curated the script and treated the sonnets as monologues between scenes. This allowed the audience to have an intimate moment with each of the talented cast members.

Act 1, Scene 5 of Twelfth Night was especially enjoyable with the brazen Jaclynn Cherry as Viola and the beguiling Annie Dilworth as Olivia. These ladies successfully introduced these elaborate characters in a short amount of time. Their volleying energy called to mind all the strong female characters Shakespeare managed to create more than 400 years ago.

Additionally, the gentlemen had their time to shine. David Galido and Will Myers delivered strong performances throughout the entire show, but Act 2, Scene 1 of Two Gentlemen of Verona was one to be noted. Using the most beautiful words in the English language, two guys sat down to watch a Detroit Tigers' game and lament on the complexities of love. The scene was performed so well that both a novice Shakespearean-goer and a well-seasoned scholar would have enjoyed this rendition.

I think Shakespeare would have appreciated this arrangement of his work, too. In the Elizabethan era, plays were meant for kings and queens, but also common people. (And they were quite rambunctious occasions, we've been told.) It would be a disservice to the Bard if the Troupe did not have fun with these characters and with theater's space and surroundings. For instance, during intermission, you could run down the block to grab a quick hot chocolate or some treats from Go! Ice Cream.

Roustabout delivered a down-to-earth yet skillfully executed night of theater. The audience was relaxed and entertained for just over an hour. Costumes were minimal and the set felt home-spun. Everything about the experience felt honest and welcoming.

Roustabout Theatre Troupe doesn't have its next show scheduled yet, but you can sign up for its newsletter at roustabouttheatre.com. The next YES! event is on February 19: "Political Puppets + Noise Makers: Workshop & Open House".