Strings Theory: Chris Eldridge and Julian Lage at The Ark

Guitarists Julian Lage and Chris “Critter” Eldridge have formidable track records in jazz and bluegrass, respectively. Lage has worked with Gary Burton, Fred Hersch, Nels Cline and more. Eldridge is widely known as a member of the innovative Punch Brothers.

So when Lage and Eldridge play as a duo -- on their new album Mount Royal, their 2015 gem Avalon and their 2013 five-track EP Close to Picture -- there’s a whole universe of music open to them, a wide range of shared tastes and enthusiasms.

Playing rare Martin acoustic guitars from 1937 (Eldridge) and 1939 (Lage), they survey the varied lineage of acoustic music and Americana while pursuing their own contemporary aesthetic. The music is improvisational, lyrical, whimsical, textural, and highly virtuosic. While Eldridge sang on much of Avalon, Mount Royal is mainly instrumental, though there are two vocal covers of bluegrass classics and even a reading of one of Eddie Vedder’s Ukulele Songs. We caught up with them shortly before their February 27 gig at The Ark.

Q: Can you guys give us your take on Ann Arbor? I’m sure you’ve played here before.
Julian Lage: Yeah, definitely been there with our other bands and together. It’s a really vibrant town full of young people, people who are into all kinds of creative efforts.
Chris Eldridge: They’re also punching way above their weight in the deli department with Zingerman’s. Oh, my God, that place is incredible. That’s the most low-hanging fruit for what’s cool about Ann Arbor.

Q: And how about The Ark?
CE: Oh, yes. We’ve played there with our own projects, and this band [the duo] played there about two and a half years ago. The Ark is one of these ancient monumental folk clubs that have been around for decades, and everybody’s played there. They’ve done a really good job of curating and being a real home for folk music and all of its offshoots. Not unlike Club Passim in Boston.
JL: Or Freight & Salvage in the Bay Area.
CE: Yeah. We’re very grateful that The Ark exists in the world. They’ve always done a really cool and wonderful thing there.

Q: You just referred to this duo as a band, and I like that.
CE: Yeah, totally. Part of the beauty of a duo is that you’re able to have such a clear conversation, in a way that in a larger band it’s not as easy. In Punch Brothers, for instance, everybody has a role and there’s not typically a ton of conversation, but we’re all meeting in some sort of area between the five of us. That’s the essence of what a band is to me. And with Jules, that’s why I call it a band -- because although we’re liberated to interact in a much freer way, the music is really living in between the two of us. It’s like a baby that we’re both trying to nurture and that’s why I call it a band. If you’re making music from that perspective it’s not even really about the two individuals, it’s about the thing you’re making.

Q: On Mount Royal and Avalon you’re playing these two Martin acoustic guitars from the late 1930s. Can you tour with those extremely valuable instruments?
CE: We’ve traveled with them but we won’t be traveling with them now. Too many flights on regional jets. But that was one of the fun things when we first got together, exploring stuff on these glorious old Martin guitars, stuff that hadn’t really been explored to our knowledge.

Q: Is it significant in terms of the lineage of acoustic music that Chris’s guitar is a dreadnought and Julian’s is a [smaller] “orchestra” model?
JL: If you asked us that question maybe five years ago, we might have said it was significant. But Critter and I did this thing a while back where we played a bunch of old guitars that were kind of chosen for us to play. They were old Washburns, Martins, and so on. We played all of them and we sounded pretty much the same [laughs], no matter the size or the style. We brought out similar qualities, which for us was educational. I think now we’re chasing a similar sound regardless of the guitar, and that’s as it ought to be. 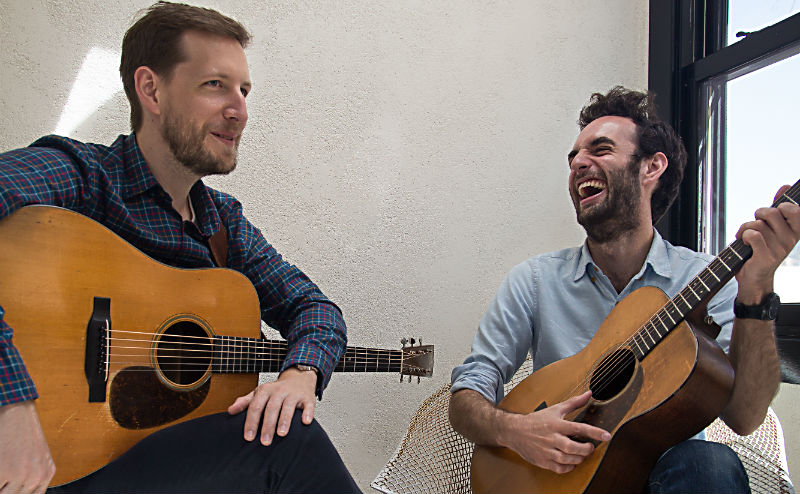 Q: For Mount Royal you challenged each other to write new music in limited timeframes. Can you describe that more?
CE: We spent a lot of time working on the music for this album. We wrote tons and tons, together and separately, and threw the vast majority of it out. We’d do these timed writing exercises and also timed improvisations, where we would just have the voice memo recorder out and try to improvise an actual piece of music. Not just go crazy and see what sticks, but a real piece of music. “Lion’s Share” was one of our improvisations -- it just came out exactly like that. We liked it so we just learned it note for note.

Q: Can you say more about the timed writing exercises?
JL: You set a timer. We could do a dozen three-minute improvisations, or if you say it’s going to be a 45-minute record, let’s improvise two different 45-minute records. That gave us a different overarching result. Improvising and writing became blurry pretty early on. But also I might write with just pencil and paper -- just write a song with 10 minutes on the clock. We had a lot of underwhelming songs that we wrote [laughs]. But we had to do that and we didn’t feel discouraged. We wrote so many songs that you won’t ever hear. [laughs] But we became less afraid of the process and more resourceful. It was transformative for us as musicians, and the fact that it exists as a record was very much a byproduct or a secondary bonus. At a certain point we thought if we don’t even finish this, we’re a lot better than we were before we started.

Q: Most of the record is instrumental and original, but there are three covers with vocals. How did those songs enter the picture?
CE: One of the things that we do live is we play songs -- music with words. At a certain point Mount Royal was weighted more heavily toward vocal music, and as we continued writing and discarding, a lot of the vocal songs didn’t make as much sense anymore. But those three really worked with this batch of material and seemed to provide a lift.

Q: The harmonized opening to “Living in the Mississippi Valley” is great -- was that spontaneous?
JL: No! [laughs] It’s so detailed that we had to work out parts for sure. It’s three-part harmony that moves without overlapping.

Q: And “Things in Life,” that stems directly from your bluegrass roots …
CE: Yeah, it’s part of who we are. There’s something really awesome and unhinged about those tunes that doesn’t come out as much in most of the music that we write. So there’s a real pleasure in just playing an ass-kicker of a bluegrass tune.
JL: Totally.