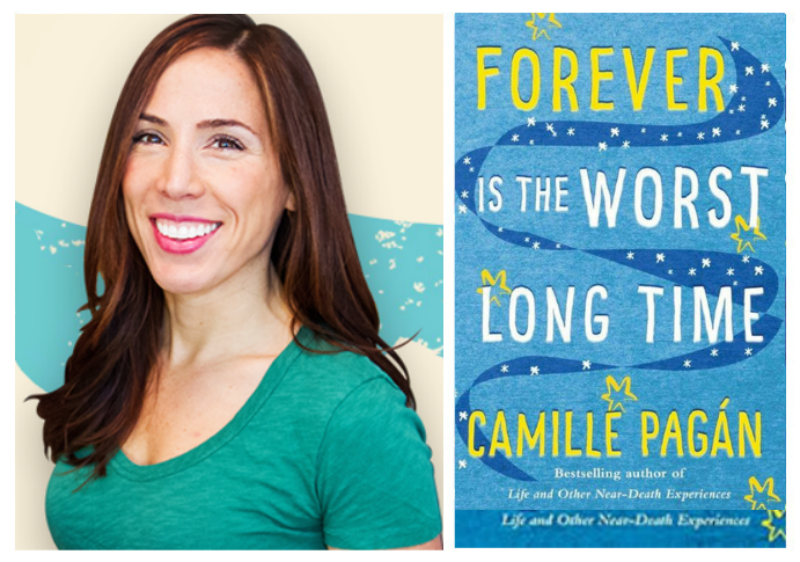 Camille Pagán knows that Forever is a mighty long time.

A few weeks ago, InStyle magazine named Forever Is the Worst Long Time by Ann Arbor-based novelist (and health journalist) Camille Pagán as one of "7 Books You Need to Read in February 2017.”

We’re now in March, of course, but Pagán’s new tale of contemporary friendships and romance gone askew offers a temporary escape hatch appropriate for any time of year.

Forever is Pagán’s third novel; her debut was The Art of Forgetting (2011), followed by Life and Other Near-Death Experiences (2015), which was a bestselling Kindle First selection that got optioned by Jessica Chastain’s production company Freckle Films.

Forever tells the story of James Hernandez, a would-be novelist who ends up writing copy for U-M’s business school. (Pagán is a U-M grad who grew up in Dearborn.) Though James falls for his childhood best friend Rob’s fiancee/wife (Lou) upon meeting her, he buries his feelings, delivers a toast at the wedding, and tries to build his own life. But years later, when Rob and Lou’s marriage falls apart, James is torn between what he wants and loyalty to his friend. In the end, he can’t resist acting on his long-repressed attraction, and the consequences for all three are far-reaching and life-changing.

“I didn’t plan on writing this book,” said Pagán. “I’d planned on writing one about a married couple, and I was just slogging through that when I had the idea for the first chapter [of Forever], and in a day or two, I had the opening chapters done. I just felt like, I know who these people are, whereas with the other project, I didn’t know who I was writing about. … With every book it seems like there’s a fire under me, where I had to get the story out.”

This makes things complicated when you’ve sold your original idea to your agent and your editors, but fortunately, Pagán has established a level of success and trust that provides her with some wiggle room.

“With my next book, Woman Last Seen During Her Thirties, it was the same thing,” said Pagán. “I still didn’t feel like writing about this married couple. So I sent what I had to my agent and said, ‘I really want to write this,’ and she handed it on to my editor, who said, ‘I’d rather have you write about what you’re excited about.’ … So I’ve had to accept that that’s the kind of writer I am. … I always have a book I want to write. It’s just not always the one I said I was going to write.”

The insistent seed for Forever, in which James is relating his own story to his off-stage daughter, was planted when Pagán’s son -- age 4 at the time -- bombarded her with nightly questions at bedtime.

“He was asking all these questions about, ‘Why do we have tailbones?’ ‘What animals don’t have blood?’ ‘What are bones made of?’” Pagán said. “I told him that different elements in bones are made up of minerals from star fragments. He was awed by that. And by the time I’d put him to bed, the whole book came to me.”

“In my circle, I noticed that a lot of men who had close childhood friends stayed close with the guys they grew up with,” said Pagán. “A lot of women I know didn’t do that. They generally had friends from high school, and then moved on and had different friends in college, and different friends beyond that.”

But Pagán had to push through the Forever’s first draft before realizing how central James and Rob’s brother-like relationship was to the larger story.

“I didn’t see until then that it had to have as much weight as the love relationship,” said Pagán. “And it’s very tense at times. There’s no ‘happily ever after.’ … I seem to write characters that -- many people don’t like them, but to me, they’re human. If you spend any significant time with any individual, you’ll find they’re deeply flawed, and the things they do aren’t always rational. I’d never write a character that makes all the right decisions all the time, because that’s not real to me. So James is that. He makes several stupid decisions. … And he’s so stuck on the idea of ‘perfect’ that he goes through life missing what would be good-but-imperfect along the way.”