Integrated Identities: "The Beauty Queen of Leenane" at the Power Center 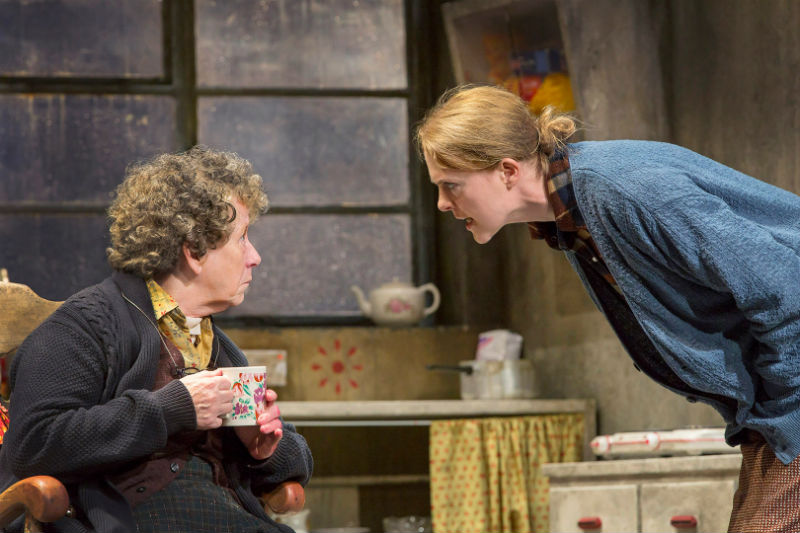 Maureen (Aisling O’Sullivan) lets her manipulative mum Mag (Marie Mullen) have it in The Beauty Queen of Leenane. Photo by Stephen Cumminskey

When two ordinary, scribbled-on pieces of paper in an envelope magically morph into a miserable woman’s key to happiness -- and your heart pounds as you hawkishly, breathlessly watch the precarious letter being set down, picked up, walked around the stage, and handed off -- that’s the power of live theater.

But it takes pros to achieve that level of emotionally tense stage magic, and when it comes to interpreting Martin McDonagh’s work, there may be none on Earth that can match Ireland’s renowned Druid Theatre Company, which performed The Beauty Queen of Leenane March 9-11 at the Power Center, courtesy of University Musical Society.

In the play, 40-year-old Maureen (Aisling O’Sullivan) lives alone with her demanding, manipulative 70-year-old mother Mag (Marie Mullen). When handsome former neighbor Pato Dooley (Marty Rea) briefly returns from London, where he works in construction, Maureen gets what seems like her last chance at love and a different life.

McDonagh’s script feels both Shakespearean, with its misunderstandings and intercepted messages, and like Williams’ The Glass Menagerie turned inside out: instead of a mother pushing a reluctant daughter out into the world, a mother repeatedly sabotages a frustrated daughter’s attempts to leave. But one thing is constant between Glass and Beauty Queen: both daughters are pushed to embody their mothers’ self-image. And as we learn more about Maureen’s past struggles, and how she ended up living with Mag, the push-pull bond between them seems all the more toxic but inescapable.

Francis O’Connor’s set felt like an externalization of Maureen’s inner life. The run-down, hopeless charcoal gray of Maureen and Mag’s rural home fittingly manages to suck the color out of anything that might threaten to flicker with life. Even the books on a couple of low shelves lay in toppled, sloppy piles, like the newspapers that provide a makeshift TV stand. In this way, items that might otherwise spark inspiration or the imagination are rendered powerless within this stagnant, contained world. 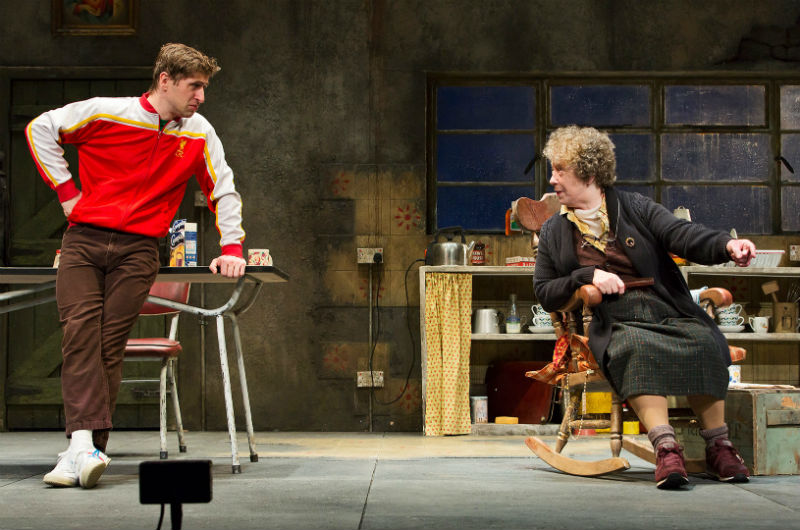 Francis O’Connor’s set and costume design in The Beauty Queen of Leenane played with color -- or the lack of it -- to display the state of the characters' inner lives. Photo by Stephen Cumminskey

James Ingalls' lighting design, meanwhile, deftly guided us through the story while simultaneously offering a glimpse of teasing hope, by way of the blue sky projected above O’Connor’s set. And the production’s costume design (also by O’Connor) delineated the characters’ sense of themselves in the world: Maureen’s dressed in baggy, drab sweaters and long skirts with boots (until she buys a new, staid-but-more-flattering black dress to attend a party); shifty Mag is dressed in dark layers that seem to have no beginning nor end; Pato stands apart -- as a visitor from the outside world -- by way of his crisp attire, and the way the clothes fit his body; and Pato’s message delivering brother Ray (Aaron Monaghan), whose bright red and white jacket visually indicate his vitality, and thus his incongruity in Mag and Maureen’s home.

Director Garry Hynes allowed the script’s most comic moments build and breathe so that when the dark moments come -- and let’s be honest, with Irish dark comedies, you know they’re coming -- the tonal shift is all the more harrowing and stark.

Druid’s terrific ensemble was more than up to the task of navigating these hairpin turns. Monaghan provided blustery comic relief as a spark plug of a man who’s consistently baffled by what happens within Mag and Maureen’s walls. Rea’s Pato, meanwhile, was a gentle man shut out from two worlds: he can’t stay in Ireland, where there’s no work, but he also feels painfully out of place in England; and Rea’s winning performance during an inevitably awkward “morning after” scene in the play, during which he makes slack-jawed Mag her breakfast, managed to be both hilarious and moving. Mullen -- who was artistically living out the play’s anxiety about the daughter becoming the mother since she won a Tony Award in 1998 playing Maureen in the Broadway production -- plays Mag as an unflappable, immovable object in a rocking chair. And her most revealing moments came as Maureen brags about something Mag knows to be untrue. Instead of quietly letting the moment pass, and thus seeing her plan through, Mag smirks and pokes at Maureen, physically unable to contain her glee at her daughter’s secret pain. O’Sullivan, finally, stands tall at the play’s center, playing Maureen as a bitter woman who’s wholly resigned herself to her awful, circumscribed fate until the hint of hope arrives from London in a suit.

It may be strange to confess that while watching The Beauty Queen of Leenane, I kept thinking of Debbie Reynolds and Carrie Fisher. Not because of the nature of their mother-daughter relationship -- they seemed, late in life, far more functional then Maureen and Mag, not to mention more capable of joy -- but because their bond with each other always seemed far more intense and powerful than any they could possibly establish with anyone else.

Beauty Queen takes this notion to a darker end, of course, but the main principle remains: when our identity is deeply, inextricably integrated with another’s, that person takes a significant part of us with them when they go.