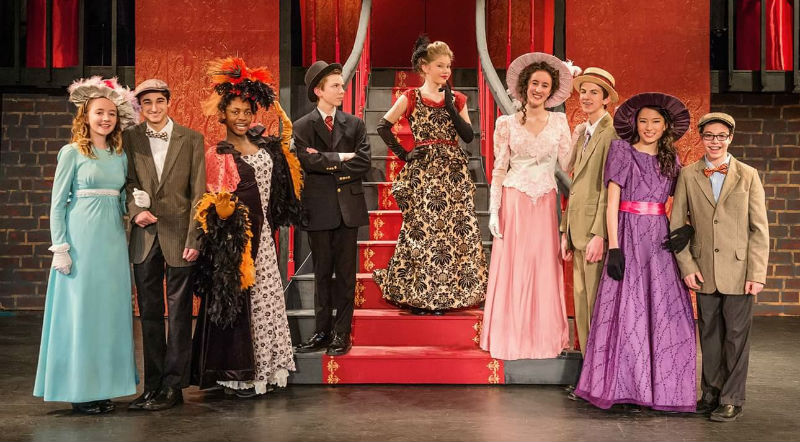 The current political climate impacts us in ways big and small -- like factoring into the decision of whether or not to ditch the “Motherhood March” number in Tappan Players’ new production of Hello, Dolly

“We were going to cut it for time,” said the show’s co-producer Lisa Richardson. “But after the Women’s March, we decided to put it back in.”

Tappan Players is a student-run theater company that stages one big musical each year. An outgrowth of the Burns Park Players, TP is now in its 27th year, and Hello, Dolly features about 80 Tappan Middle School students in the cast, more than 30 in the crew, and 15 in the orchestra. The company was born out of a desire to give kids who age out of Burns Park Players a chance to keep learning about theater and be part of a show.

“There’s a certain amount of magic that happens,” said Richardson. “When I’ve made sure the director (Anna Martinsen) has what she needs, and the business part gets done, I spend a good chunk of time sitting in the audience during rehearsals. … And watching these kids who started out shy and unfamiliar with the process start blossoming right before your eyes -- I think of it as a magic place, where kids get to be creative and free, and no one’s judging them for it.”

Hello, Dolly! premiered on Broadway in 1964, with music and lyrics by Jerry Herman and a book by Michael Stewart (inspired by Thornton Wilder’s play The Matchmaker). Set near the turn of the 20th century in New York City, the show tells the story of Dolly Gallagher Levi, a charismatic, sharp-minded widow who works as a matchmaker. While pretending to seek a wife for crotchety “half-a-millionaire” Horace Vandergelder, Dolly clears the field to step into that role herself.

Locals may recall that the Burns Park Players mounted Hello, Dolly! in 2014, and while being able to recycle some costumes and sets -- as well as some hats from BPP’s My Fair Lady in 2016 -- played a role in TP’s decision to return to a classic, it wasn’t the main reason.

“We have a new director this year,” said Richardson. “She helped out as an assistant director last year, but this is her first year directing for us, and Hello, Dolly! is her favorite musical. And when you’re choosing a show, you want it to be something the director will be passionate about. … It’s easier to put all that time in when you love the show.”

Hello, Dolly! features the iconic title song, as well as “Put On Your Sunday Clothes,” “Before the Parade Passes By,” and “It Only Takes a Moment.” And because the show’s set in an era that’s distant from the students’ own, they’re learning a little history along the way.

“We try to make that part of the process with period pieces,” said Richardson. “Last year, with Annie, we talked with the students about the Depression, and FDR and the progressive things he did. This year, we’re talking about women’s suffrage, and … how Dolly is a very progressive woman for the 1890s.”

As is often the case when kids are involved, Tappan Players is a family affair. One parent from each family must commit to a minimum of 10 hours of volunteering to make sure everything gets done. But the kids run lights, paint sets, work on costumes, and much, much more with light adult supervision. For all practical purposes, students really are “running the show.”

And although Richardson’s own former Tappan Player, daughter Katarina Stanczak, has moved on and is currently a 14-year-old freshman at Community High School, the mother-daughter team is co-producing Dolly.

“It’s been really fun,” said Richardson. “She was an assistant producer at first, but one time, I had a personal emergency I needed to take care of, so she took over for me that night, and I told her, ‘I’m promoting you to co-producer.’”

But even before this partnership formed, Richardson found she couldn’t abandon the company.

“I stayed on because no one stepped up as producer, and Tappan Players is too important to let it fail or end,” said Richardson. “We haven’t had people emerge as the future of the organization yet, so that’s part of the process we’re going through now is finding the next person to take this on. … Our costume designer doesn’t have a kid in the show, either. We just can’t seem to leave.”

Tappan Players’ production of “Hello, Dolly!” runs for three performances, with showtimes on Friday, March 24 at 7:30 pm; Saturday, March 25 at 1 pm; and Sunday, March 26 at 1 pm, all at Tappan Middle School, 2251 E. Stadium Blvd. in Ann Arbor. Tickets cost $12 for adults, $10 for children/students, and they’re available in advance at ShowTix4U.com.