"Here and There": The voyeuristic art of Tracey Snelling

Tracey Snelling's art forces us to peak into worlds that might make us uncomfortable.

Upon entering the U-M Institute for the Humanities' gallery room that houses artist Tracey Snelling’s latest exhibition, lsa.umich.edu">Here and There, one is immersed in a life unfamiliar to some and unimaginable for others. Neon signs flash “drift” and “Lost City” to light up the darkened room while several tiny, connected rooms hang from one wall all bustling with sights and sounds to tempt the viewer to look closer and give in to their voyeuristic desires.

The rooms, each about the size of a shoe box, were completed during the Berlin, Germany- and Oakland, California-based Snelling’s recent residency at the University of Michigan’s Institute for the Humanities. While viewing the rooms from afar gives you an idea of how the entire piece moves as a whole, Snelling wants to get up close and explore the rooms. Upon closer inspection with the Bee Gee’s “Night Fever” as your soundtrack one begins to notice the details placed in each room to give them character; a shotgun leaning on a recliner, the Jack Daniels poster on a wall, High Fidelity playing on a screen in the record shop, or a pool cue leaning on a pool table in a bar. 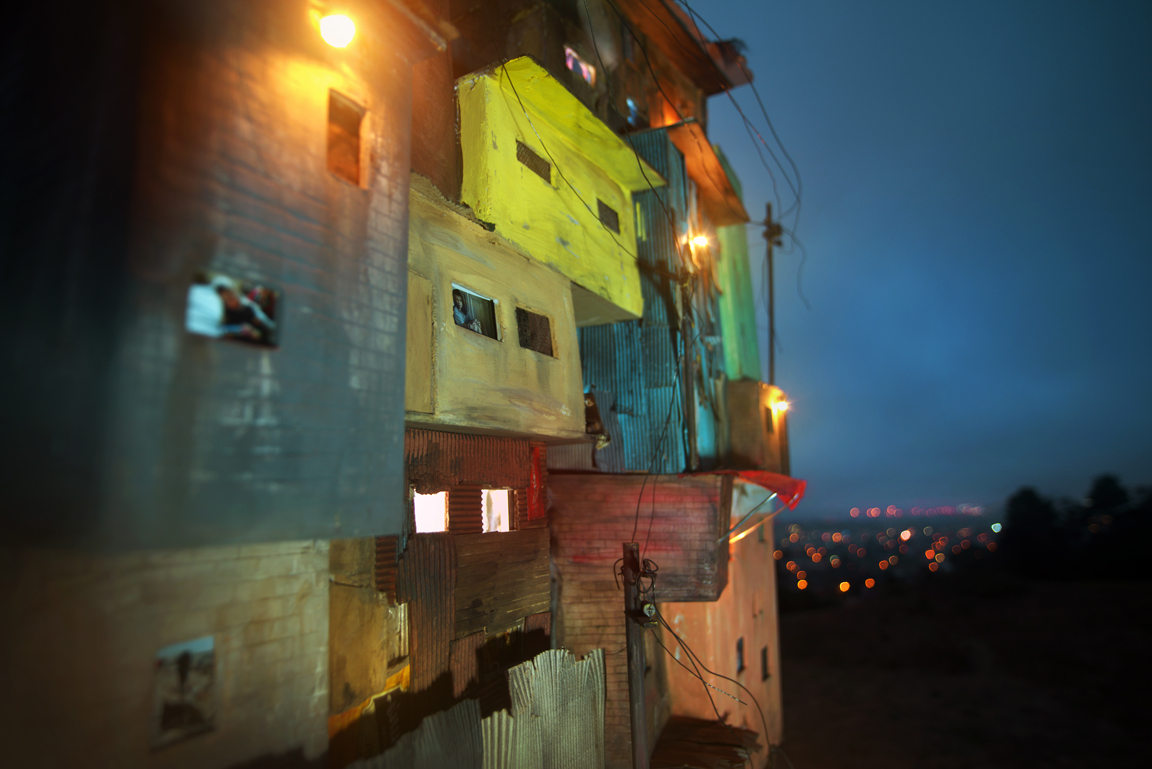 An excerpt from Tracey Snelling's One Thousand Shacks video.

The centerpiece of this exhibition is Snelling’s signature work, One Thousand Shacks, a 15-foot tall installation teeming with life via photos, sound clips, and small screens playing video throughout the sculpture. According to Snelling, One Thousand Shacks is about global poverty and the inequalities that lead to divisions among classes and races.

The exterior looks like a massive, colorful tenement building, and is beautiful on its own, but Snelling’s real goal, once again, is to get you close to One Thousand Shacks. Tiny windows fill the sculpture from top to bottom like peepholes enticing you to witness the ups and downs of the daily lives of those in poverty. The experience can be just as enlightening and inspiring as it is infuriating and heartbreaking.

Both the tiny rooms and One Thousand Shacks are slices of life. Snelling is inviting us to enter worlds we may be hesitant to step foot into, but have no qualms about observing and judging from afar. Her hope is you’ll take the bait and immerse yourself in the atmosphere created by the fascinating and intriguing world of Here and There.

Prior to her Penny Stamps Speaker Series talk at UMMA on March 20 that launched Here and There, Snelling answered some question from Pulp over email.

Q: Did the Ann Arbor area inspire any of the works included in Here and There?
A: The small-scale bar ended up with a few images that I added from Powell's Bar in Ypsilanti, and I used a few images from Detroit, but mostly the work represents "anyplace.” Places that can be found anywhere.

Q: Can you discuss your decision to make One Thousand Shacks so large, and the amount of time that went into creating an installation that includes so many different elements?
A: I initially had an image for this work in my mind. It was even larger, actually much wider. When I sketched it I decided on the size. I spent almost a year working on it while working on other projects at the same time, and with the help of two assistants, I built it in 9 pieces that fit together like a puzzle, which makes for easier transport. I made the work about extreme global poverty and was influenced by many places around the world.

Q: Your work regularly uses moving imagery to immerse the viewer deeper into the piece. Is this an attempt to make the viewers focus a bit closer on something that may make them uncomfortable?
A: The addition of video to most of my work adds another layer. In relation to One Thousand Shacks, it's an additional way that I can add information. Global poverty is a very complex issue with many facets. I wanted to show as many as possible -- hunger, environmental issues, drugs, etc., but also the resiliency of the people living in these areas. There's laughter, religion, people starting small businesses, musicians, kickboxing classes for kids, etc.

Q: You tend to focus on places that many people may think are a little less glamorous: adult bookstores, a male metalhead’s bedroom, a 7-11. What is the draw for you to re-create these places in miniature?
A: I've always been a bit of a voyeur, so I like to look at places that are "forbidden" in some way, such as adult bookstores, strip clubs, and massage parlors. These are interesting to me because there are many facets: desire and want, the idea of power and who has it, and the manufactured and surface idea of satisfaction and if that's really attainable. With places like 7-11, a bar, or a beauty supply shop, I like to look at the mundane places we see everyday and elevate them to the sublime. I'm fascinated by the signage, feel, and smell of these places. I frequent many of these places, so while I like to observe the people who go there, I am one of them, too.

Q: At the beginning of your career your work was mainly in photography. When did you make the move to sculpture, and how has your photography background helped your sculpture work?
A: While doing a photo degree at the University of New Mexico, I started making collages using old Life magazines. One had a brownstone with many apartment rooms; this inspired me to make a three-dimensional sculpture, which was covered in collage and had lights. This was in 1998. I would then often photograph the rooms or buildings. I've moved organically from photo to sculpture to video, installation, etc. I like the idea of experimenting and not limiting myself to any one medium.

Q: What are you working on now since Here and There is finished?
A: I will be returning to Berlin for at least a year, for residencies at ZK/U and the Bethanien. I'm finishing up a sculptural installation for the Frankfurt Historical Museum, and several works for the Contemporary Jewish Museum in San Francisco. I will also be working on a solo exhibition for the Bethanien next year.

"Here and There" is open 9 am-5 pm until April 28 in the Institute for the Humanities gallery, 202 S. Thayer, Ann Arbor. Visit lsa.umich.edu for more information. Snellings' Penny Stamps talk will be uploaded to the series' YouTube channel soon.