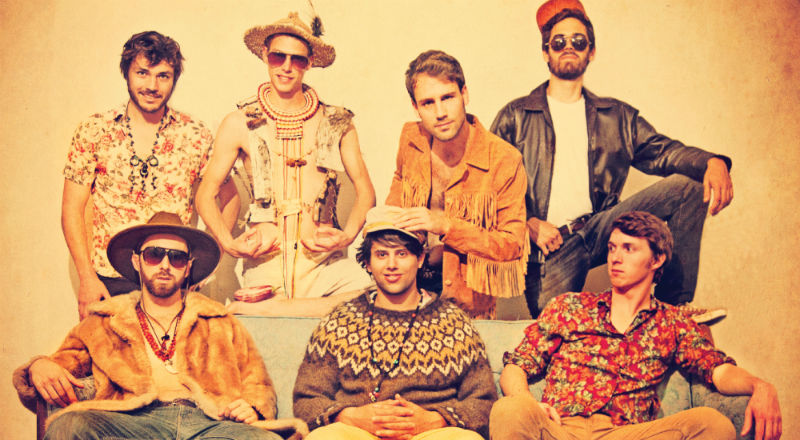 Joe Hertler and the Rainbow Seekers visit Pluto on their new album.

Most jam bands flaunting funky guitar riffs and soulful saxophone solos don’t feature lyrics featuring inward exploration and Joseph Campbell references. But Joe Hertler and the Rainbow Seekers fill this hole in your musical palate you didn’t even know you had.

Producer and bassist Kevin Pritchard heard Hertler through Bigger Brush Media’s Quilted Attic session series in Lansing, where the singer lives. From there, the project took off. Their first album, 2011's On Being, features plenty of banjo and fingerpicking, resembling Hertler’s early solo EPs. It’s obvious the group was just getting its sea legs in terms of crafting the funk-pop sound they finally settled on.

On 2014’s Terra Incognita, the outfit solidified its acoustic-rooted, electric-accented, boogie-jam focus. Standout tracks like “The Garden” and “Future Talk” talk about the necessity of living in the moment and being devoted to those you care about. For the brand new Pluto, electronica has crept into the Rainbow Seekers' sound, but Hertler’s lyricism is still evident on the singles “Lonely” and “Crimson Line."

Hertler’s lyrics come across like Henry David Thoreau meets Passion Pit with their fusing of natural influences and pop rhythm and meter. “Crimson Line” from Pluto is a masterful display of Hertler’s profound connection to the Earth and doesn’t seem like it belongs in a synth-based track. The opening lines, “As staccato mountains rise to meet their morning form / Their peaks ignited while the sun reaches on overboard,” conveyed through Hertler’s soft but funky falsetto, could make a suburbanite worship the natural Earth.

Every Rainbow Seekers show is full of flowery sets, some form of outlandish costume -- multi-colored feather capes and grandpa sweaters -- and good vibes all around. The Rainbow Seekers also like to dip into energy-filled covers, with the Ghostbusters theme sneaking its way into a setlist every now and then.

The Rainbow Seekers will play back-to-back gigs at The Blind Pig Thursday, March 30 and Friday, March 31 to celebrate the release of Pluto.

In an email interview with Pulp, Hertler spoke about his songwriting process, Pluto, and who he would like to grab lunch with.

Q: How would you describe the band's shift in sound from your guys' first album, On Being, to Terra Incognita to now? What forces are behind that?
A: The songs of On Being were written just before the band came together, thus the record being folkier in a singer-songwriter kind of way. Terra was written with the full band in mind -- and definitely veers toward the funk-pop realm. Both previous records deal with more external subject matter while Pluto is rather personal. Sonically, it's much more lush, atmospheric, and moody that anything we've done before. I wrote a number of the songs this time around on my bass -- and also used a number of atmospheric synth patches; however, the Rainbow Seeker sound and energy is entirely due to the playing styles and personal tastes of my band.

Q: Can you talk about your songwriting process? Who would you consider to be your biggest inspirations? How much do they play into what you write?
A: In a way, I believe that creative ideas, they exist in some weird nebulous realm where they lie dormant and when you have the right combination of experiences -- the source of inspiration -- you can reach up and grab them and pull them down to Earth, but you have to feel and certain way -- and that feeling has to be true. When you first grab them they’re messy and confusing, but as you slowly unravel, this big mess, you’re left with a tiny, glowing seed. And inside of it lies a feeling -- mixed with tonal variations, lyrics, and harmony. It's the band's job to take that seed and make it grow and bloom.

Q: You've mentioned in the past how large of an influence reading has on your songwriting. How does literature creep into your lyrics? What are you reading now? Any recommendations?
A: I adore books and my tunes are riddled with literary references. Experiences create songs -- and books contain incredible experiences. Even if I'm not directly relating a song to what I'm reading, it always seems that my creative output is at its best when I'm actively reading and learning and experiencing the world. If you happen to notice a reference, please tell me so we can talk about the book -- it fills me with a particular sense of joy. I'm currently reading East of Eden, which might be the greatest book I have ever read, but I also highly recommend Blood Meridian by Cormac Mccarthy, Kafka on the Shore by Haruki Murakami, All Quiet on the Western Front by Erich Maria Remarque, and anything by poets WS Merwin and Mary Oliver.

Q: What is the creative process like between you and the bandmates when you write a new song? How much dialogue is there when you guys are feeling out the vibe?
A: My good friend and long-time drummer, Rick Hale, once sent me an email that explained our creative process as such:

Our first job, once you have delivered a seed, is to decide whether it is as pure and true as your past seeds. If the answer is yes, our next job is to build a tiny, totally unique musical fortress for the seed. Some fortresses, like the one for [Future Talk], we build with chrome, glass, mirrors, and haze. Others, like the one for [Here Be Dragons], we fashion from wood, twine, and pitch. Still others are completely unique—The one for [What It Feels Like to Drown] is made almost completely of water. In any case, the purpose of a seed's fortress is twofold: The seed must be insulated from the harshness of the world, and the world must be protected from the unadulterated truth of the seed. But the two must be able to interact on some level. (Otherwise, our endeavor would be pointless.) Safe inside a fortress, your seed is able to go out into the world and interact with the people of the world in a favorable, seemingly innocuous way. And by the time they wonder why they like the fortress so much, it's too late. The identical glowing kernel in their own heart has already been awakened by the one inside the fortress.

We've been playing together for over 6 years now, and we really have a lot of trust in each other as musicians. Everyone kind of has their realm, but we certainly offer suggestions. A lot of times it just comes down to us jamming and practicing over and over and, eventually, we figure out the song. It's a wildly rewarding and challenging process.

Q: Your new album, Pluto, comes out this week. First off, where did that album cover come from? It looks like you as a toddler but you’ve got this pose full of adventure and spirit, like you’re on your way to hike every corner of the world. There's gotta be a story behind that.
A: We worked with a number of artists on album art, but unfortunately, we just couldn't find something that fit. We were a month out from releasing the record and still didn't have artwork. I really felt that I dropped the ball with album art and was super frustrated. Then, one day, our drummer, Rick, acquired that photo of me, which my mom had posted to her Facebook page, and made a mock cover. Miraculously, we agreed to go with it, but we needed the original photo since the [scan] was super low-res. My mom currently lives in South Africa and the photo was in some unknown location in her U.S. home. My cousin David helped me out and dug through hundreds of old photos and finally found it. Then, it got lost in the mail for a week. We managed to get the photo one day before we needed to submit it to iTunes and Spotify.

Q: What kinds of themes are at play on Pluto? In terms of lyrics and musicality, what can we expect?
A: If there is one overarching concept that ties these songs together, it is the concept of human connection and how important it is to personal existence. And also, this record is about the private struggles that we all uniquely share, in which I find a joyful melancholy, solidarity, and solace. Personally, writing songs is how I reach out. It's how I best communicate with others. Songs allow me to talk about the things that I struggle to talk openly about, yet my intention is to share these feelings with the world -- I want people to connect with them.

Q: Having seen you guys many times, I can say the Rainbow Seekers put on a damn good live show. What inspires you guys when you're planning sets, costumes, covers, or any other antics we can expect at The Blind Pig?
A: Every show is a celebration in human connection. We are honored to cultivate an experience where people can have fun and be themselves. There is a lot of color in this band -- and the costumes and personality of the live show is an extension to that. Plus, it's just really fun to dress up.

Q: If you had to pick one artist living or dead to sit down with pick their brain for an hour, who would you choose and why?
A: Jack Stratton from Vulfpeck. He's the creative foundation behind his band and is pretty incredible when it comes to promotion and management. While I know most of Team Vulf, I hardly know Jack. Figure he's probably a pretty interesting dude.

Matt Harmon is a communications and international studies major at U of M and is an assistant news editor at The Michigan Daily.

Joe Hertler and the Rainbow Seekers will be at The Blind Pig Thursday, March 30 and Friday, March 31. Ann Arbor’s Jacob Sigman will open on Thursday and The Stellars on Friday. Tickets are $15, doors are at 9 pm, and the shows are 18+.