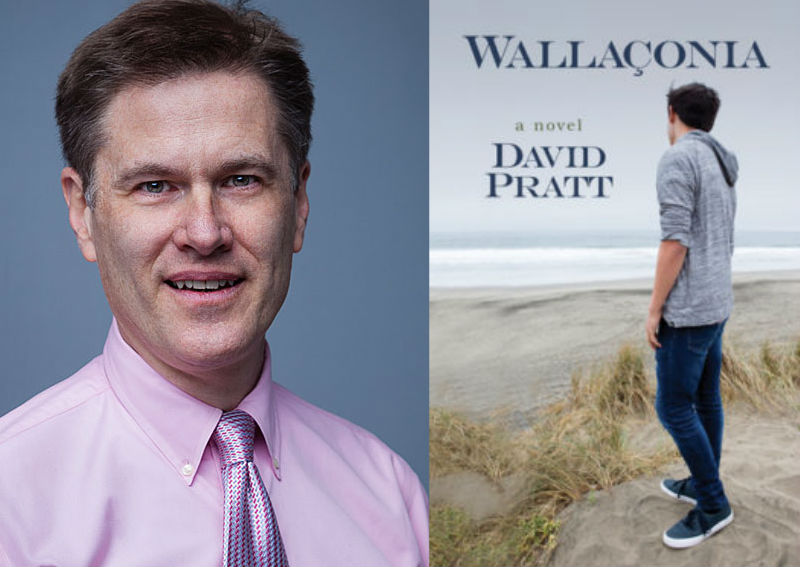 David Pratt's latest novel, Wallaçonia, is about honesty and perserverance.

We all feel isolated during adolescence. But Jim Wallace, the main character in Ann Arbor-based author David Pratt’s new book, Wallaçonia, does something about it.

Feeling alienated from his own world, Jim imagines his parents’ yard and woods as his private country -- the titular Wallaçonia. But as we all must do, Jim grows up and realizes he has to leave behind not only his secret place but certain assumptions he made about himself.

Bookseller Pat Baxter asks Jim to work at his store with him over Christmas break. Jim at first feels conflicted about working for the openly gay Baxter. But when Jim’s father makes fun of Baxter, Jim takes a stand by working for him. He feels he should stand by this man and be an ally to Baxter. Through the course of the book, Jim realizes that is more than an ally -- he is gay himself.

“The book is more about the 'how' than the 'what,'” Pratt said. “Jim has some of the same insecurities as Pat and it was important to me to have a setting where they could talk and get to know each other.”

An independent bookstore selling used books fit perfectly into Pratt’s vision of a place where the two could hang out and get to discover each other’s true self.

This is not the first time that literal books have played a role in Pratt’s work. His first novel, the Lambda Literary Award-winning Bob the Book is “literally about a gay book,” Pratt says.

The author stresses the importance of books and bookstores in today’s society: “A lot of crap gets spread around on the internet. If someone has taken the time to actually publish something, then you know that serious thought and work has gone into it. You aren’t just dashing something off on Tumblr or Grindr -- you have something you are passionate about.”

In particular, independent bookstores fill a huge need. “Amazon is indiscriminate about what it recommends,” Pratt said. “It is based on an algorithm based on the author. But in places like (Ann Arbor's) Common Language, Keith (Orr, co-owner along with husband Martin Contreras) is right there and can recommend books to you. (The owners) serve as filters for all of the noise out there and help books find their audience.”

Wallaçonia targets a wide audience. It started as a young adult/new adult book but because it also features a strong mentoring relationship, Pratt said, “the actual spectrum of readers is much larger -- from late teens to 50+.” He added, “A lot of gay young adult books are read by adults because we didn’t have that when were kids.”

Pratt’s book focuses on the honest relationship between Jim and Pat. “Honesty is a big part of this idea of ‘character,’ which is kind of an invention to keep people out of certain things," he said. "If you are gay, you can’t be honest and you are robbed of this idea ‘character.’ I wanted to restore it to the characters, which is what led to the creation of Pat and Jim. My wish was to give these two gay men the gift of character in spite of their many mistakes.”

Pratt adds, “Looking back on the book, I realize that I wanted to set an example for everyone to show that, despite all of their mistakes, they still are good people who try to do the right thing. Sometimes they drive off the road the wrong way and have things to atone for but their essential character is not damaged. I want to say it’s okay what you did, it is all right.”

"Wallaçonia" launches with a reading, reception, and signing on April 2 at 4 pm at Common Language Bookstore, 317 Braun Court, Ann Arbor. For other author events in April 2017, visit our curated list of recommendations.