Complicite’s "The Encounter" is a hallucinatory audio playground 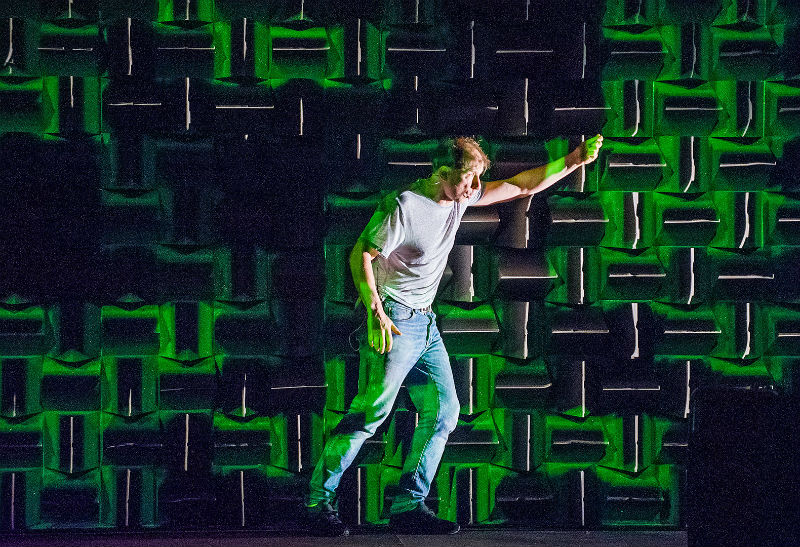 Simon McBurney is a one-man cast of hundreds in Complicite’s The Encounter. Photo by Tristram Kenton x1080.

Thursday’s opening night performance of Complicite’s The Encounter, presented by UMS (and running through Saturday night), got me thinking about how, when you’re a parent of young kids, you notice on a daily basis how their powers of imagination, and capacity for wonder, utterly dwarf your own. Now, this isn’t too surprising when you consider how often kids are encouraged to conjure up stories and images, while the adults around them are stuck in “adulting” mode: worrying about work, home upkeep, money, relationships, emails, appointments, and various other responsibilities.

So how do you lure a capacity crowd of over-stressed adults down the rabbit hole of imagination and deep into the Amazonian rainforest? By finding new, innovative ways to open this often-jammed door in our brains.

With The Encounter, Complicite -- one of Britain’s (and the world’s) most inventive theater companies -- achieves new levels of theatrical immersion by delivering the show’s time-hopping, atmospheric narrative to the audience through headphones; employing a visceral, binaural soundscape (designed by Gareth Fry, with Pete Malkin) that does a real number on your perception; and through employing lighting (Paul Anderson) and projections (Will Duke) that make a deceptively spare set (Michael Levine) -- with a textured foam backdrop, suggesting an enormous recording studio -- into a hallucinatory playground.

Yet pulling all these elements together, for the purposes of taking us on an exotic journey, falls to director/performer Simon McBurney, the only person who appears on the stage. Though we occasionally hear the recorded voices of others -- including Petra Popescu, who wrote the novel The Encounter: Amazon Beaming, which inspired McBurney to create the show -- McBurney is the show’s primary storyteller, acting as both narrator and, through a voice modifier, National Geographic photographer Loren McIntyre.

The encounter in question involved McIntyre’s fateful trip to find, and photograph, the indigenous Mayoruna tribe. When a plane drops him off in the rainforest for a few days, he’s soon confronted by tribesmen. He follows them to their village -- a considerable journey on foot -- and gets hopelessly lost, leaving him at the tribe’s mercy.

Not all the Mayoruna approve of McIntyre’s presence, of course, and the photographer can’t verbally communicate with them; but a leader that McIntyre has dubbed “Barnacle” begins telepathically speaking to the visitor, telling him that the tribe is taking steps to go back “to the beginning.”

What this means, exactly, and how the Mayoruna view time differently than we do, and the consequences of McIntyre’s visit -- for him and for the tribe -- all play important roles in the narrative, which is intermittently interrupted by the voice of McBurney’s young daughter, popping up out of bed like a kind of 5-year-old whack-a-mole, along with a handful of others who have perspectives and insights relevant to the story. This is in keeping with the show’s notion of time being circular, instead of linear, thus collapsing different snapshots of time together.

This is physically echoed when McBurney, as McIntyre, runs on a circle of light on stage -- around the Mayoruna village -- in order to appear to cast a hex. But it’s also reinforced by the fact that, when you try to describe Complicite shows, you end up talking in circles. Indeed, it’s hard to articulate the way all these theatrical and technological elements combine to take you somewhere utterly new, and yet they do. And McBurney is a seemingly tireless, captivating guide.

For his performance is unlike anything I’ve ever seen. Yes, he’s alone on stage with little more than water bottles, a table and chair, and microphones, but as you’re processing the dissonance between what you’re seeing and what you’re hearing, McBurney is doing the heavy lifting of shifting between highly distinct characters, pressing an echo pedal at just the right moment, using (and dispensing with) simple props, creating sound effects, and executing blocking that meshes with the storytelling -- including a searing, intense punk rock moment near the show’s end. It’s like 3D acting, in a sense, in that McBurney’s not just responsible for his own dialogue and movement, but for executing everything related to bringing us on this heady trip to the jungle.

And it is heady. The question of how we might change, could we simply walk away from the things that have come to own us (see the aforementioned “adulting”) and collectively reframe our motives and sense of time, is one that strikes close to the heart of us all. So although, when the lights came up, everyone in the Power Center immediately, predictably reached for their phone -- that’s how we’re wired now, after all -- I’d like to think that there was, at least, a heightened awareness about our communal reflex to do so.

Of course, at a basic human level, we all want to feel connected. But encountering The Encounter will likely push you to re-think the means by which we desperately try to satisfy that need.

Complicite’s "The Encounter," presented by UMS at the Power Center, continues through Saturday, April 1. Visit ums.org for tickets and more info.