Hail to the Catholepistemiad Michigania: 200 years of U-M at “True Blue!” 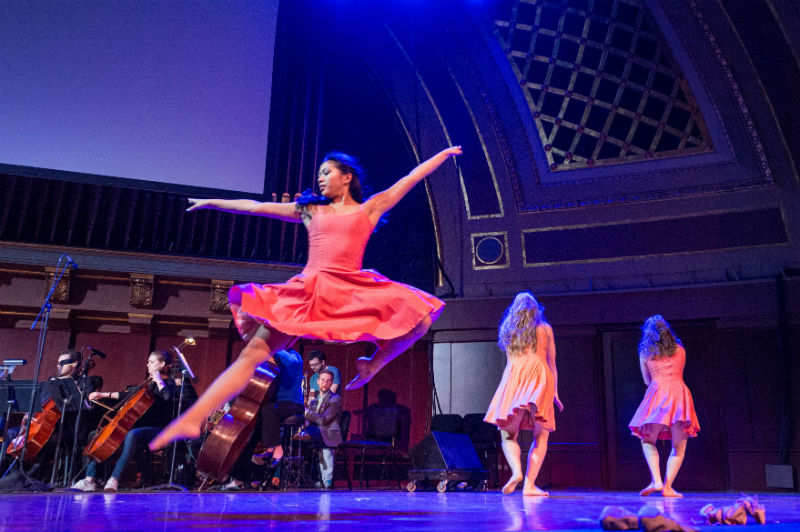 But instead of introducing the Michigan Marching Band, Grapentine introduced two of the evening’s emcees, Glee star Darren Criss (’09) and Grimm star Jacqueline Toboni (’14), who welcomed musical theater majors to the stage to perform a special version of “The Victors,” arranged by A.J. Holmes (’11); and theater majors, who delivered a rap about U-M’s founding and growth -- wherein we learned that the school was originally called Catholepistemiad -- or University -- of Michigania. (Thankfully, the name didn’t stick. Imagine spelling that in the stadium.)

The evening’s program emphasized U-M grads’ contributions to social justice, activism, science, medicine, sports, culture, and more, while also highlighting the institution’s moments in history’s limelight (President Kennedy’s Peace Corps announcement, the announcement that Salk’s polio vaccine was effective, etc.). And because Scopes Trial lawyer Clarence Darrow attended Michigan’s Law School, the program featured a re-enactment of an excerpt from another high profile case, Ossian Sweet -- a black Detroit physician who defended his home, in a white neighborhood, from those who tried to run him out. Passionately delivering Darrow’s closing speech on Saturday night was George Shirley, the groundbreaking opera performer, emeritus U-M professor of voice, and winner of the National Medal of the Arts.

This re-enactment led to what was perhaps the most goosebump-inducing moment of the evening: the Michigan Men’s Glee Club’s powerful, stirring rendition of the Oscar-winning song “Glory,” from the movie Selma.

“For the record, this is what an actual glee club looks like,” quipped Criss, who also delivered a witty line about the Diag representing “the separation of Church and State.” 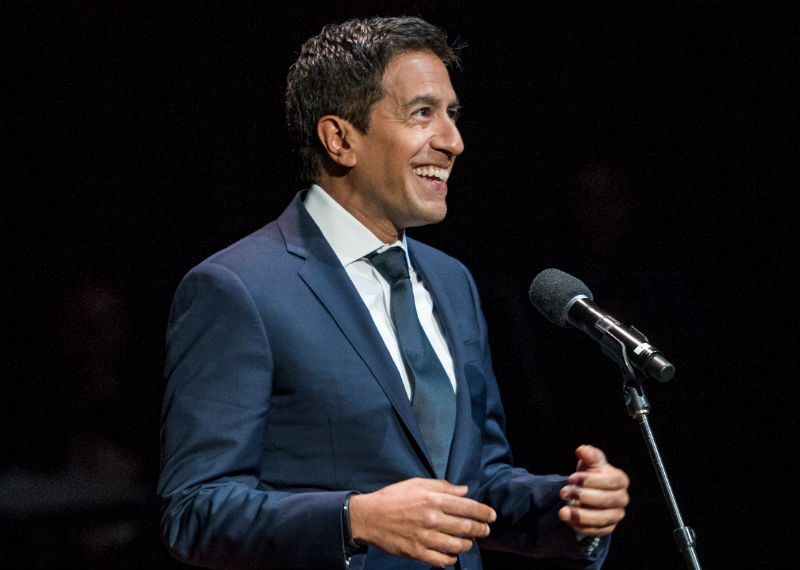 CNN's Sanjay Gupta told the tale of how his parents met at U-M. Photo courtesy of Michigan Photography.

Fellow emcee (and CNN correspondent and neurosurgeon) Sanjay Gupta, meanwhile, shared a charming story about how his parents met at U-M. Apparently, his immigrant mother was determined to be the first female auto engineer, so she drove by herself to Michigan, and her car broke down in Ann Arbor. She found a pay phone and scoured the white pages for the first Indian name she could find, and while the guy she called wasn’t home, his roommate -- who’d just graduated with a U-M engineering degree himself -- was, and he soon arrived to help her.

“He never thought getting an engineering degree would help him meet girls,” Gupta joked.

“Which shows you that Michigan didn’t just teach me how to thrive,” said Joyce. “It taught me how to survive.” 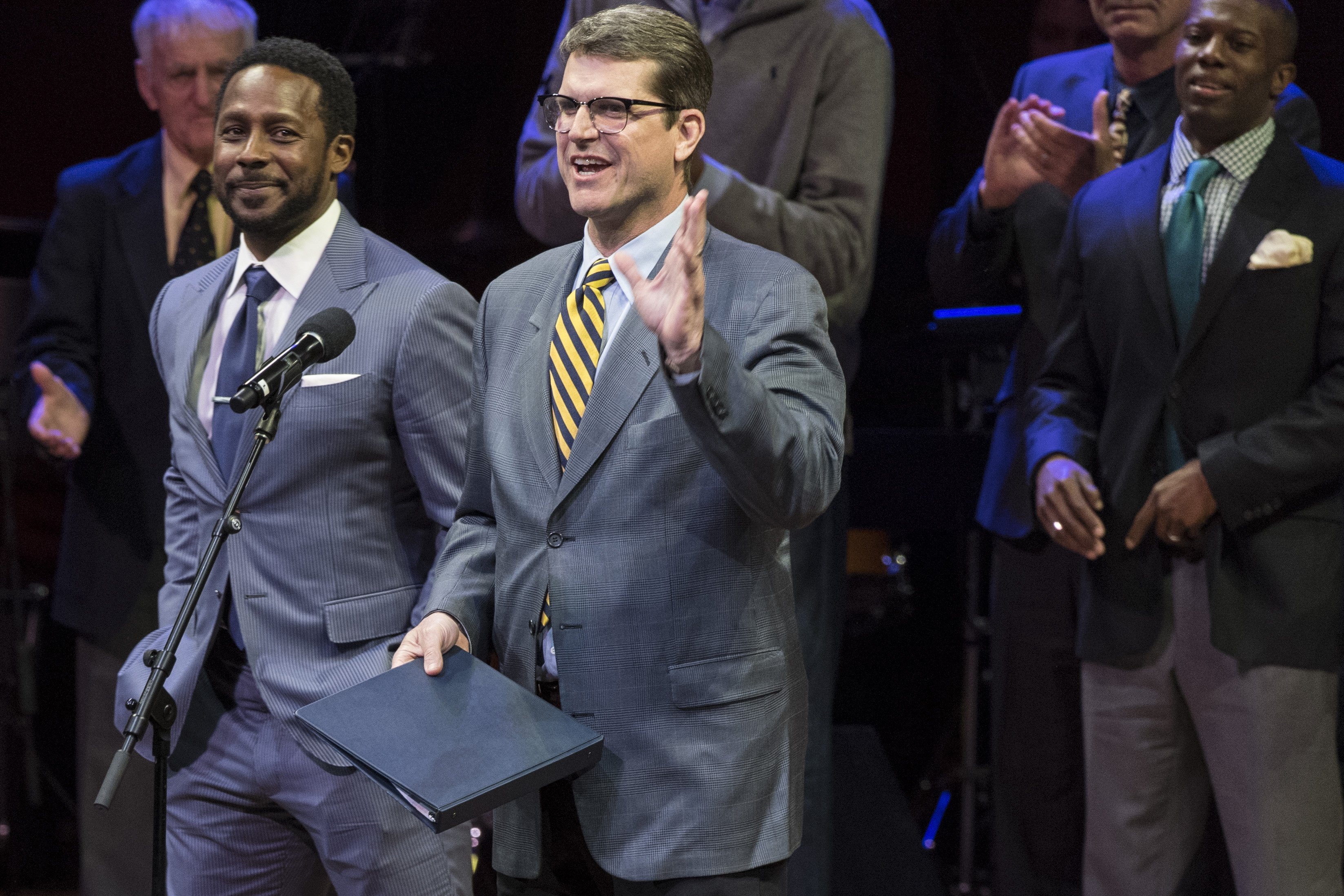 Of course, you can’t have a Michigan celebration without football coach Jim Harbaugh, right? Flanked by Wolverine sports stars like Sierra Romero (’16), Fab Five-r Jimmy King (’93), and Desmond Howard (’92), as well as fellow coaches like John Beilein and Red Berenson, Harbaugh predictably went off-script. While every other speaker used a teleprompter, Harbaugh arrived onstage with a binder, from which he read a speech about the intersection of sports and social justice.

Unfortunately, one of the evening’s most anticipated highlights fell through -- stage and film star James Earl Jones (’55) couldn’t attend due to illness -- so a video clip of Jones reading a speech from Death of a Salesman, by fellow U-M alumnus Arthur Miller, had to suffice. 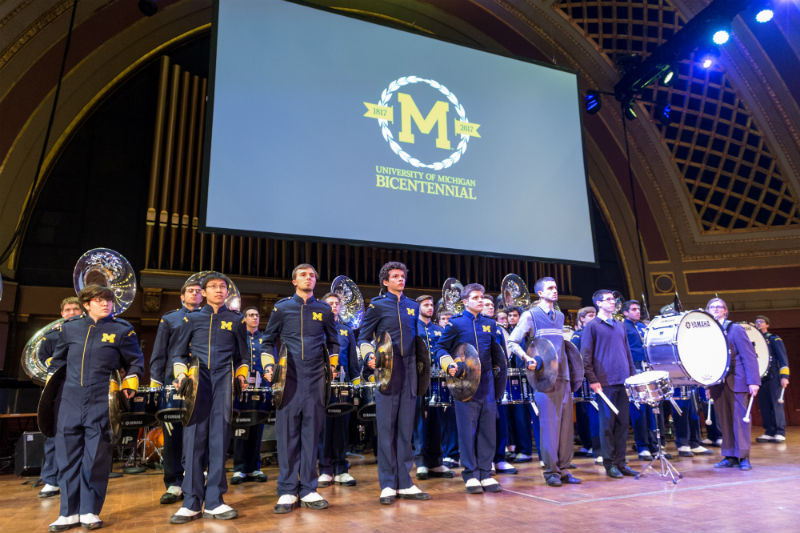 What's a celebration of U-M without playing "The Victors"? Photo courtesy of Michigan Photography.

But other stars of various kinds played a role Saturday evening, in the form of Hamilton producer Jeffrey Seller (’86), who shared a memory about how a U-M Soph Show production of Grease made him so happy that he knew he wanted to put on shows the rest of his life; and astronaut Alfred Worden (’63) and NASA’s Chief of Space Medicine Operations Mike Hess (’91), among others.

Saturday evening’s program had a few glitches -- occasional microphone problems, small technical delays -- and a tribute to Raoul Wallenberg was in serious need of some context. (I was familiar with the lecture series named for him, but I hadn’t known his story.) Yet after a closing statement by U-M President, Dr. Mark Schlissel, a costumed, old-fashioned, small band of musicians playing “The Victors” on stage gave way to a dramatic entrance by the entire marching band, who went on to play “The Yellow and Blue” and “Michigan Fanfare”/“The Victors” before exiting the auditorium by way of, well, entries.

And it’s pretty hard not to feel pumped up and proud after that.