Two U-M exhibitions examine the battle for equality on campus 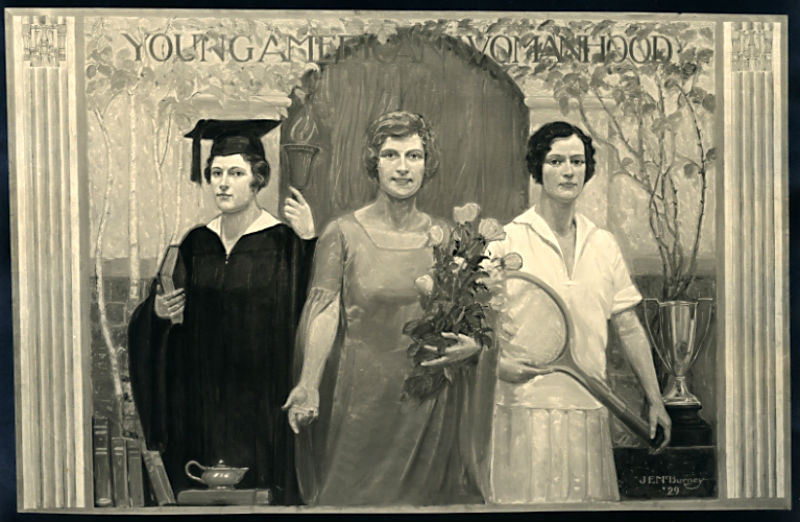 A fine example of "Young American Womanhood" from the "Constructing Gender: The Origins of Michigan's Union and League" exhibition.

Two local art exhibits highlight equality on University of Michigan’s campus: one focuses on two particular campus buildings while the other looks at the students and campus as a whole.

"Constructing Gender: The Origins of Michigan's Union and League" at UMMA

You’ve driven by them dozens of times: the Michigan Union and the Michigan League. You know that inside these iconic campus buildings are study rooms, eateries, visitor suites. But did you know they were originally envisioned as being separate facilities for male and female students?

The UMMA exhibit “Constructing Gender: The Origins of Michigan’s Union and League” highlights the fascinating -- and very gendered -- beginnings of these structures. Early planners intended the entire university to be gender segregated. President Marion Burton said in 1921, “[M]en’s interests will center south and west of campus … while new buildings for women will go to the north of campus” and these buildings were no exception. The Union (opened in in 1919) was intended for men while the League (opened in 1929) was to be the domain of women. To raise funds for the buildings, fundraisers pitched the League as “The House That Jill Would Build” while the Union used the slogan, “What 2,000 Michigan men go after they are certain to get.”

The very entries to the buildings were planned differently to accommodate the societal norms at the time. Because unescorted women were not allowed through the front doors of the Michigan Union, a guard stood post to ensure that women entered through a side door. This practice only ended 61 years ago when women were finally allowed entry via the front door. Interestingly, it was not the last space in the Union to prohibit women; the billiard room did not allow females until 1968. 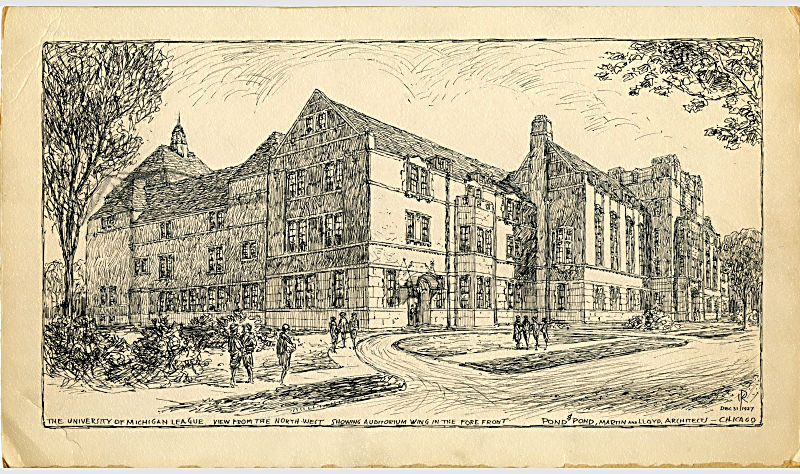 An architect's imagining of life around the then newly proposed Michigan League.

The interiors were also designed based on gender. Architects Irving Pond and Allen Pond indicated that since men enjoy themselves with and without women, only “minimum of accommodation” for women would be made at the Union. Conversely, since “women … find their enjoyment greatly enhanced by the presence of men or boys,” the maximum possible accommodations for men would be made in the League.

The exhibit features photos of the Union’s swimming pool (which both genders could swim in albeit at different times), of formal dances including the Interfraternity Ball of 1939 and 1934’s Slide Rule Dance, various stages of construction of the buildings, and students of both genders enjoying the many amenities of both the League and the Union.

"The Student Experience: Flappers, Mappers, and the Fight for Equality on Campus" at the Hatcher Graduate Library

Times have changed on the campus of the University of Michigan, but as this exhibit at the Hatcher Graduate Library demonstrates, students are students irrespective of the day and age. One thing that has definitely remained the same is that students will find ways to entertain themselves. Back in the “flapper” days of the 1920s and earlier, students organized events by their class. Women organized the Sophomore Circus (later called the Sophomore Cabaret), featuring themes such as “Winter Wonderland.” After World War II, men were included in the event which they then called the Soph Show. Not to be outdone, the junior class sponsored the J-Hop. Originally called the Society Hop back in the 1870s, the event evolved to be a significant event on campus. By 1913, it encompassed several days of concerts, parties, and a big Saturday night dance. The women in the junior class produced an annual play called, fittingly, the Junior Girls’ Play. These financially successful productions helped support the building of the Michigan League. Freshmen were not left out of the fun as they had their Freshmen Pageant and Picnic every April. After a picnic supper at sunset, the students paraded in a Lantern Night procession. Women provided the pageantry by dancing in the trees above Palmer Field. 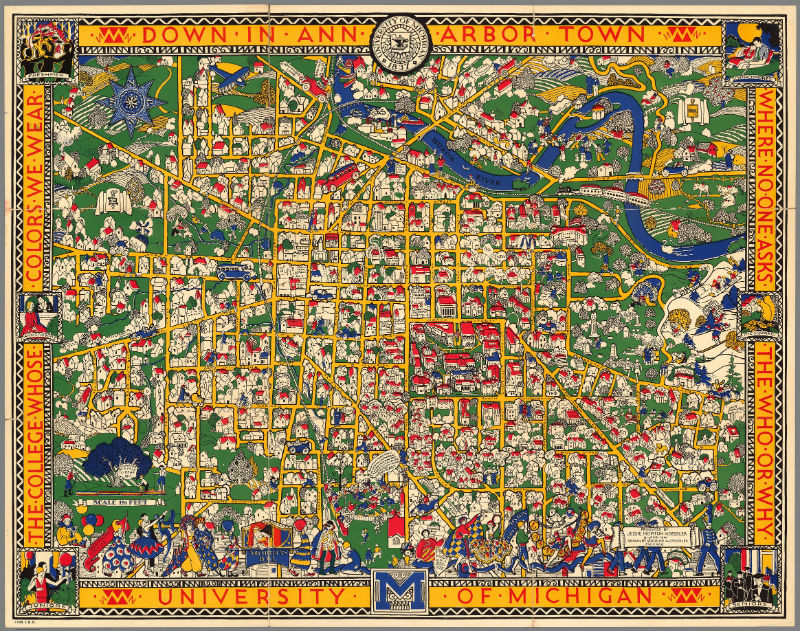 Gertrude Strickler "Down in Ann Arbor Town" map is on display at the "The Student Experience: Flappers, Mappers, and The Fight for Equality on Campus" exhibit. To zoom into various parts of town,
visit the David Rumsey Map Collection.

To help students navigate an increasingly larger campus in 1926, artist Gertrude Strickler drew a map called "Down in Ann Arbor Town." (Like the Junior Girls’ Play, these proceeds also benefitted the Michigan League.) The pictorial style of the map emphasized story over actual geography and scale. While they were not meant to be used to literally find a place, the maps offered an imaginative glimpse into the goings-on at the U.

Years later traditional maps were produced by women like Marie Tharp and Helen Hornbeck Tanner. These offerings comprise the second part of this exhibit. A native of Ypsilanti, Tharp answered the early 1940s call recruiting women to the geology department at the University of Michigan. Later at Columbia University, Tharp and her partner Bruce Heezen, mapped the topography of the ocean floor. At the time the two began their work, women were not allowed on research vessels; therefore, Heezen got the data and Tharp drew the maps. Tharp’s struggles to be accepted into and taken seriously by this male dominated profession cannot be overstated. Her work essentially confirmed the theory of continental drift, at the time a controversial idea. Nevertheless, her own partner dismissed her observation as “girl talk” and refused to believe her theories for over a year.

The work of historian and historical geographer Helen Hornbeck Tanner is also highlighted in the exhibit. Her 1987 tome Atlas of Great Lakes Indian History remains the gold standard for the subject. Hornbeck Tanner strongly advocated for women, indigenous peoples, and for equality. To this end, she created the Susan K. Power and Helen Hornbeck Tanner Fellowship at the Newberry Library.

Examples of the material displayed at "The Student Experience: Flappers, Mappers, and The Fight for Equality on Campus" exhibit.

But the fight for equality did not begin or end with Hornbeck Tanner’s work. The mere thought of allowing women into the prestigious university led the 1958 Board of Regents to fuss that to do so would be a “very dangerous experience,” a “doubtful experiment,” “certain to be ruinous to the young ladies” who attended and “disastrous to the Institution.” And thus is the introduction to the third section of the exhibit: the struggle by so many for the equal rights automatically afforded to a select few.

While women and minorities have come a long way, it was not without a struggle. Early female and minority students and their accomplishments highlight part of the exhibit. Posters and pictures include the formation of the Students for a Democratic Society, the Black Action Movement, the Graduate Employees Organization, teach-ins, the John Sinclair rally, and the many protests and rallies that accompanied these demands for basic rights. While this display eventually ends, the struggle does not and this exhibit serves as a timely reminder of where we were, where we are, and where we can go.

Patti Smith is a special education teacher and writer who lives in Ann Arbor with her husband and cats.

"Constructing Gender: The Origins of Michigan's Union and League" is on display until May 7 at UMMA. Women can even walk through the museum's front doors to view it!

"The Student Experience: Flappers, Mappers, and the Fight for Equality on Campus" is on display until May 12 at the Hatcher Graduate Library.