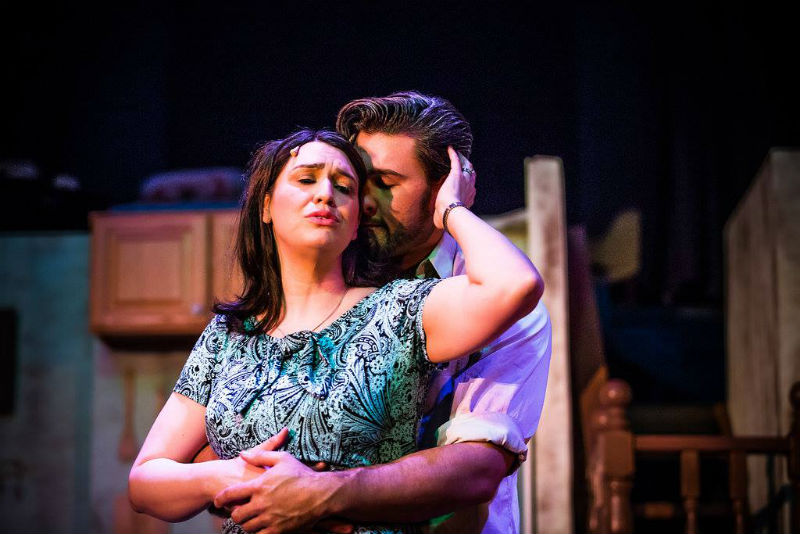 Francesca (Marlene Inman) and Robert (Jon McHatton) are 'bout to cross that chasm in The Dio Theatre's production of The Bridges of Madison County. Photo by Michele Anliker.

The stage musical adaptation of The Bridges of Madison County, now making its Michigan premiere at Pinckney’s Dio Theatre, ends its first act with a moment that feels like a key catching in a lock -- and in that instant, you feel each person in the audience make a choice: they’re either checking out or they’re all in.

Why? Because the show’s story, set in Iowa in 1965, focuses on a lonely, middle-aged, Italian former war bride (Francesca, played by Marlene Inman) who, while her husband and two teenage children are away for a few days at the Indiana State Fair, finds herself irresistibly drawn into a love affair with an itinerant National Geographic photographer (Robert, played by Jon McHatton) who’s in town to shoot pictures of the local covered bridges.

Often, tales of adultery stack the deck by making the absent spouse abusive or coarse or deceitful, thereby subtly justifying the betrayal and making it easy to sympathize with the partner who strays. But Bridges, perhaps fittingly, takes the more challenging road less traveled, making Francesca’s husband Bud (Andrew Gorney) a decent, upstanding guy who’s simply not particularly engaged or romantic. After nearly 20 years of marriage, this hardly seems a unique or punishable offense.

So how you respond when Francesca leads Robert into the bed she normally shares with Bud -- which inevitably feels a little extra back-stabby -- will depend on the reach of your empathy for her situation. Francesca must ultimately choose between her own happiness and her family’s, and while some audience members may feel she only has herself to blame, others will think, “If someone suddenly makes you feel awake and alive, in the midst of sleepwalking through life, it can’t be easy to push that away and simply say ‘no.’”

Toss double standard considerations into the mix -- namely, do we reflexively judge women more harshly than men for pursuing pleasure and happiness at the expense of others? -- and you’ve got a meaty show that’s likely to both polarize audiences and launch some meaningful conversations.

But the two-and-a-half-hour show also presents theater companies with entirely different kinds of staging challenges. Based on the 1992 bestselling novel by Robert James Waller, with a book by Marsha Norman ('night, Mother) and a Tony-winning score by Jason Robert Brown (Parade, The Last Five Years), Bridges requires some significant set changes. Scenic designer Matt Tomich, who also designed the show’s lovely lighting and sound, ambitiously aims to transport us into Francesca’s country home and to one of the covered bridges -- not to mention the state fair, a bar, a field, and the binocular-wielding neighbor’s house. Tomich achieves some of the shifts by way of tall, enormous set pieces that are rotated and used as screens for projections, or moved apart to allow for the quick, on-stage, skeletal construction of a bridge. The show’s set changes, particularly in the first act, are complex, and sometimes noisily distracting (inevitably so), but the end result is that we’re more palpably a part of the landscape of Francesca’s world.

Inman, as Francesca, more than delivers on Brown’s soaring, operatic score. (Indeed, for all the reasons mentioned above, Bridges has more than a whiff of opera about it, both musically and plot-wise.) But even more importantly, Inman conveys Brown’s lyrics with the stunning emotional clarity necessary to really understand the changes happening within Francesca. Leading man McHatton is exactly the sensitive-but-super-masculine, handsome, vocal powerhouse needed for the role of Robert (though being a smidge young for the part gave the affair more of a “cougar” vibe). And Dan Morrison and Carrie Jay Sayer, as Francesca’s neighbor Charlie and his nosey wife Marge, charmingly offer up a seemingly happier model of marriage while also injecting some laughs into the show. But Sayer’s biggest dramatic moment to shine arrives near the show’s end when she quietly opts for compassion over judgment.

Brian Buckner directed the show’s music; the soloists are consistently terrific, and the swelling ensemble numbers (despite occasional, minor imbalances) achieve goosebump-status more than once. The show itself has some flaws: the opening number, “To Build a Home,” feels overly busy, so it’s hard to zero in on the information we need and thus get settled into the story; Brown uses a song performed by Robert’s remembered ex-wife, Marian (Madison Merlanti), as a device to advance time during Robert and Francesca’s first shared dinner together -- and while I understand its theatrical function, and the song (“Another Life”) is lovely, the set-up nonetheless feels awkward; and finally, after all the movement of the first act, the second act feels physically stagnant, as the lovers sing to each other in Francesca’s kitchen for some time.

Generally, though, director Steve DeBruyne’s efforts to bring this big, sweeping show to life on the Dio’s stage -- and the wildly talented team he’s assembled for that purpose -- result in a powerful evening of musical theater. (For those who may not know, the Dio serves dinner before each performance and some actors from the show work as servers -- which offers a great chance to chat with them and ask questions.) DeBruyne notes in the show’s program that he aimed to build the show’s world around Francesca, and this vision is beautifully realized in numerous ways.

But as I mentioned before, your personal inclination to either condemn or empathize with Francesca will, in the end, determine your willingness to cross these heartwrenching Bridges with her.