A Model Modern Pirate Musical: UMGASS's "The Pirates of Penzance" 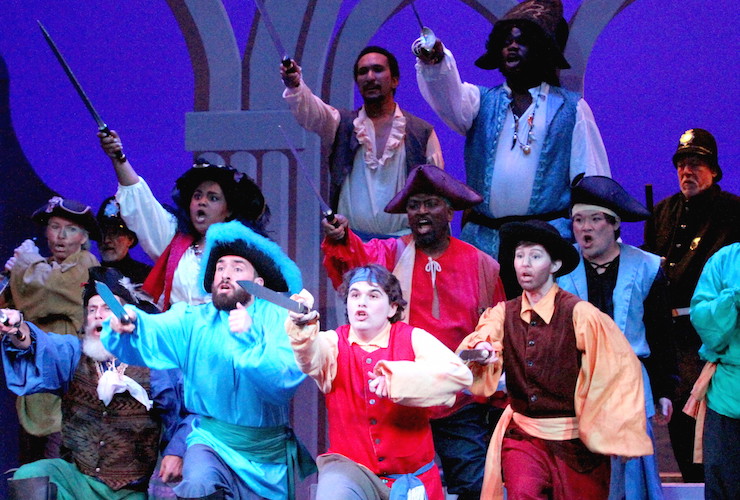 The University of Michigan Gilbert and Sullivan Society (UMGASS) hits the stage at the Mendelssohn Theater again this weekend with what must be their umpteenth production of The Pirates of Penzance. Pirates is far and away Gilbert & Sullivan's best-known work, well-represented in popular culture, as demonstrated by Muppets, Animaniacs, Kevin Kline, and even a complete production in Yiddish.

UMGASS takes Pirates seriously, which is to say, not seriously at all, delivering a delightful community production, loaded with talent and laughs, that stays true to the original work without casting it in amber.

Amanda Marie Xydis shines as Mabel. New to UMGASS but not to Ann Arbor, her performance in a very challenging role is amazing, especially when she delivers the most demanding passages of "Poor Wand'ring One" with both the virtuosity they require and the ridiculousness they deserve. Somebody get her a 7-foot-tall talking carrot!

Christopher Kendall returns as Frederic, with a very solid vocal performance and plenty of mugging in a role that's often played too earnestly. He can hold his own against Xydis and is particularly wonderful in "When You Had Left Our Pirate Fold," with Marcus Peterson as a booming Pirate King, and Jaime Sharp as a suitably-transformed Pirate Ruth.

Choreography is always a safe place for modern Gilbert & Sullivan productions to stretch their wings a bit, and the creative team made many excellent choices that amplify the comedic moments and get laughs on their own, showcasing both the talent in the chorus and how much fun everyone is having.

UMGASS always shines in the pit, and this is no exception; the quality of the orchestra is simply outstanding under the direction of muppet-like conductor Ezra Donner, even if they did take "Modern Major General" just a smidge too fast. Matthew Grace as Major General Stanley kept the appropriate stiff upper lip throughout and delivers some of the show's best asides along the way.

The whole production is just a must for Gilbert & Sullivan fans or the operetta-curious, and UMGASS can be counted on as always to offer a lovely evening at the Mendelssohn. Don't miss this Rollicking production - this weekend only!

UMGASS's "The Pirates of Penzance" continues April 14, 15, and 16 at the Lydia Mendelssohn Theater. Tickets are available online, or at the Mendelssohn Box Office.