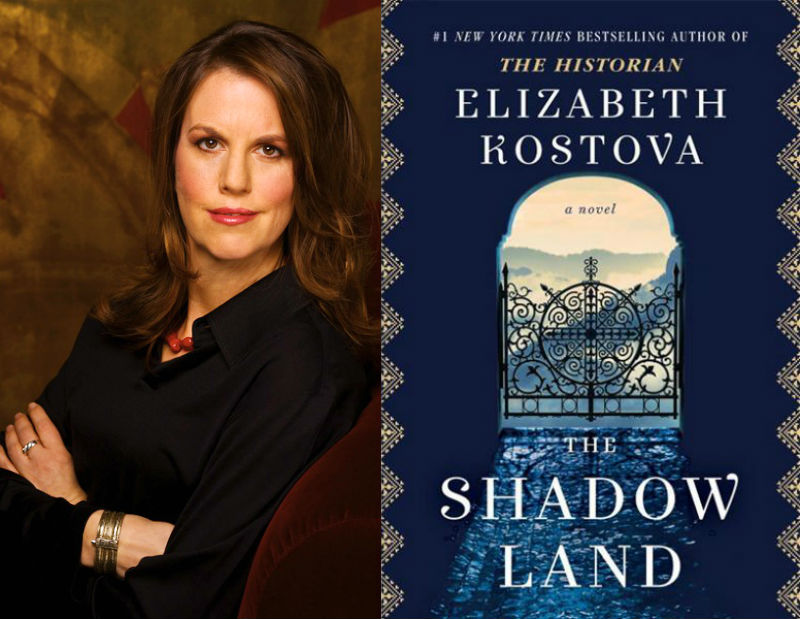 Bestselling author Elizabeth Kostova (The Historian) may now be touring to promote her newest novel, The Shadow Land, but when she arrives in Ann Arbor to appear at Nicola’s Books on Monday evening, she may feel like she’s back home.

Why? Because after Kostova earned a spot in the University of Michigan’s renowned MFA program in creative writing, and graduated, she stayed in Ann Arbor until her family moved to Asheville in 2009.

“I’d intended to just stay (in Ann Arbor) for two years, then go back east and resume teaching there,” said Kostova. “But I loved it so much there that I ended staying. My family was there almost eight years. It was a great place to be for a while.”

Kostova arrived in Ann Arbor after having spent more than five years writing, in her spare time, what would become the smash-hit vampire epic The Historian, and she was about halfway through the draft. During her two years at U-M, she completed the draft.

“I’d been writing and researching it all those years, and it had been going very slowly indeed,” said Kostova. “I’d had a lot of teaching jobs, so I was very busy making a living, and we had three small children then as well. I’d wanted an opportunity to really focus on it, and the MFA program was incredibly helpful to me. It was a really constructive, supportive community. I got wonderful peer critiques and wonderful mentors. One of my classmates likened it to taking ‘the Nestea plunge.’ It really was like that. And I was determined to have the book done by the end.”

So one of the most valuable things U-M’s writing program provided Kostova was a sense of momentum. “Yes, I worked extremely hard, but also, I got momentum from having other people see it and read it, and the momentum of being in an environment where people cared so much about writing,” said Kostova. “It lights a fire under you.”

The Historian (2005) -- which became the first debut novel to land at number one on The New York Times’ bestseller list in its first week -- demanded a great deal of research, as have all three of Kostova’s novels. Her 2010 follow-up, The Swan Thieves, explores, by way of an impassioned psychiatrist, a painter’s motives for attacking a canvas in the National Gallery of Art.

Kostova’s new novel, The Shadow Land, focuses on 26-year-old Alexandra, who travels to Bulgaria to teach English and to process her brother’s disappearance and presumed death (for which she blames herself). Upon her arrival, though, she helps an elderly couple into a taxi, only to find that they’ve left one item behind: a bag that holds a box filled with a person’s cremated remains. What begins as a simple attempt to find the couple and return the bag eventually becomes a full-on quest for Alexandra, who soon learns that the remains are those of a musician, Stoyan Lazarov, who suffered greatly during the country’s communist past.

The crux of the story lies in Alexandra’s choice to keep pushing ahead, rather than leaving the remains with authorities.

“Any decision like that tends to be complex, and made as a result of several factors,” said Kostova. “Her having experienced what it’s like, not being able to bury someone she loved, and to still be feeling that guilt and grief -- that’s what’s driven her overseas. And it reveals a conscientiousness, but it’s also a moral decision. She doesn’t even express it to herself, but she sees herself as a helpful young American who wants to do the right thing in a situation she never imagined getting into. It happens to her very suddenly. … So as people often do when they’re in a whole new situation, and a new country, having cut themselves away from the ties that lay behind them, she’s making decisions more impulsively than she otherwise might.”

The book shifts between following Alexandra in the present day and Stoyan in the past. “The two people that the book focuses on never meet in life, but they come to mean a lot to each other in terms of their destinies,” said Kostova.

And while she tried hard to give both stories equal weight, Kostova admits that the pull of Stoya’s tale was strong. “The story that goes back to World War II, and the coming of communism to Bulgaria all at once -- I was so compelled by it,” said Kostova. “I’d done a lot of reading and study for that part of the book, and sometimes I really got caught up in it.”

Part of Stoyan’s story, though, involves his time in a labor camp, which made for an emotionally grueling stretch of research for Kostova.

“I worked on this book for 8 years, and there were days when I thought, ‘I can’t face this material again,’ because there’s no way you can write about something fully without imagining it fully,” Kostova said. “Of course, sitting and imagining you're in a labor camp is very different, very removed from the real experiences people had. But it was harrowing, and there were times when I thought, ‘I can’t stand knowing more about the part of human nature that could do this.’”

But Kostova pushed through the tough parts of her creative journey and is now talking with fans across the country about how present-day Bulgaria must acknowledge and reconcile the truths of its communist past. (The author’s first trip to Bulgaria occurred in 1989, the week the Wall fell.) At the same time, Kostova knows that in this political moment, America is grappling with its own sense of identity.

“I really see this as a chance for me to, in a small way, have conversations about the risks of people’s rights being ignored,” Kostova said. “How people start turning against one another, how there’s mass surveillance, how anyone could be considered ‘enemies of the people’ -- and it’s so pertinent with what we’re struggling with in ourselves just now. … I think that we are reaching a turning point in society where we’ll have to make some hard decisions, and we’ll have to select and stick with a belief system about individual rights and freedoms. We absolutely need more dialogue and vigilance, so I’m quite proud to publish this right now and engage in conversations about it.”

Elizabeth Kostova will discuss and sign copies of her new book, “The Shadow Land,” at Nicola’s Books, 2513 Jackson Ave., Ann Arbor, on Monday, April 17 at 7 p.m. This event is free.