At first listen, Terence Davies' voice seemingly betrays his 71 years. Even with his charming British accent, the Englishman sounds gravelly, like he can't get as much air into his lungs as he might like. But then it takes about 30 seconds of hearing his words to understand age might not explain this condition as well as a literally breathless enthusiasm for whatever topic he's discussing.

I spoke with Davies about his latest film, A Quiet Passion, a biopic about Emily Dickinson that details her complicated family relationships, her unconventional religious beliefs, and her own self-esteem issues in order to celebrate a unique life and illuminate her poetry. The film opens at the Michigan Theater on Friday, April 21.

Q: How did you decide on Emily Dickinson as a muse?
A: I discovered her when I was about 18 from this little program on television, a program with Claire Bloom reading the poetry. I went out and bought a little anthology. I was 18 then. It was only 12 or 15 years ago that I began to reread her. Then I read a biography and thought this was the most extraordinary life, that she carried on even though she had less than a dozen poems published in her lifetime and she died completely unknown really. But that makes it all the more powerful, and I love the poetry, and I love her spiritual quest because I went through that myself. I was a devout Catholic and between 15 and 22 I had a great deal of doubt and fought it and fought it until I realized that it really was a lie and I'm now an atheist. But she never became an atheist. She constantly oscillates between, "Is there a god, is there not a God," but knows she's got something called a soul, and there's always an implied hope in all the poems that there might be something beyond this. So those were really the reasons why I wanted to do it.

Q: How difficult was it for you to write the screenplay compared to other things you've written? Did you find it more of a challenge because you wanted to capture this other artist's life?
A: Not really, no. Every script is difficult because you're trying to get the best out of that subject. So that's always difficult, but that's always the challenge and impetus to it as well. It gave me a great deal of pleasure writing it I must say. It's the only one of my films where absolutely nothing went wrong at all anywhere. It was bliss from beginning to end so I can't complain. When you love something and you want to write about it that's a joy in itself. 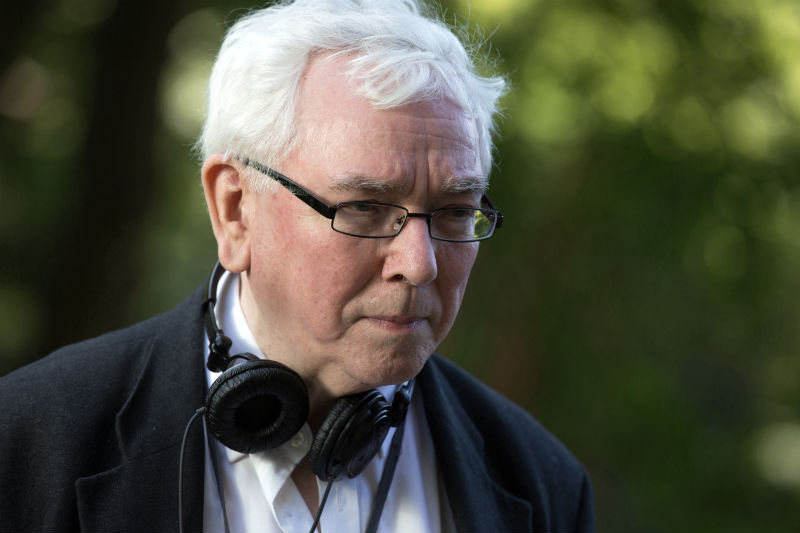 Q: I hope the casting process was also a joy. Cynthia Nixon was a wonderful choice; how did you end up seeing and casting her?
A: I met her over six years previously for a film that I couldn't raise any money for and never forgotten her. There's only one extant photograph of Emily at 17. One of my producers who used to be a sales photographer superimposed Cynthia's face on Emily's and they looked very, very similar. Also, she knew about Emily Dickinson's work because she grew up hearing Julie Harris' records of them and knows the verse herself and she can read poetry. A lot of people can't and she can. She said, "Well, you won't get a film off the ground if I'm starring in it." and I said, "We will. We will." And she stuck with it for four and a half years. She was so loyal. So loyal and such a wonderful, wonderful actress; really, really gifted.

Q: You've had such a long and prolific career I'm curious how your approach to filmmaking has changed over time.
A: It's not so much that that's changed. For 10 years I didn't work at all. No one would give me any work at all and something happened to me. I still can't figure out what it is that happened, but those 10 years changed me. I think you've got to be passionate about what you do but you have to put it in perspective. It's very easy to think that this is the be all and end all of everything. I care about making films and everybody who has worked with me cares about film. Everybody who makes films cares about them, but it's not mining coal. It's not a cure for cancer. You've got to keep it in perspective. I feel a sense of freedom really, but I can't explain it more than that. It really is that vague.

Q: You have so effectively mined your own life story for your art. How did you approach getting yourself into Emily Dickinson?
A: There are certain things that I feel very strongly with her -- the nature of spirituality is one, a very important one. The nature of time, which I've always been interested in regardless of A Quiet Passion, that's another. But also I know what that struggle was like. I really do empathize with her. I think she didn't so much withdraw from the world as to her family because she thought that was a kind of safe haven. And obviously, for a while, it was. But when your family starts to change and that safe haven becomes a prison I know what that feeling is like. I wanted my family never to change and I was the youngest of 10. I just didn't want anyone to change but it does and you can't stop that. So those things I felt very close to her. In fact, my manager said he thinks it's the most autobiographical film I've made.

Q: How much research ended up on the page and in the film?
A: Because I was limited to a two-hour film I did not have time to read any of the letters, it was just impossible. Doing it from her point of view, that limits what you can have in. If you're doing it from one character's point of view the only thing that can be in the film are those things to which she's privy, or part of, or hears about, so that cuts it down. Now I read six biographies and I got to the point where I thought I can't read anymore, I've got to concentrate on those three areas that I just said and anything else really has to be disregarded. You can't have everything, you can't. Obviously, I took certain liberties. Aunt Elizabeth is actually an amalgam of the maternal aunt and the paternal aunt. She was actually Edward's sister, was only 26; she didn't like being an Aunt at all and was very tetchy about it. But I thought if she was that young somehow it would not be really convincing, so I thought I'll put the older one and the younger one together.

Q: What is your favorite Emily Dickinson poem that you could not work into the finished film?
A: I got my favorite in. "Because I could not stop for death," I got that in. That was the first one I heard so I was determined to get it in.

Q: What projects are you working on currently?
A: I've got two projects. One is based on a lovely book by an American called Richard McCann; it's called Mother of Sorrows. The final script has been done for that. Paul Dano is attached to it, we're casting and raising the money now. I'm in the process of writing a film about Siegfried Sassoon.

Q: Your last three films have been very female-centric. I'm curious if that's purposeful or if those are just the stories that spoke to you?
A: I'm first and foremost drawn to the stories. They happen to be about women. I was brought up with my sisters, although obviously, I love my brothers and my sisters and mother, but like a lot of gay men, I think we get on well with women because there's no ulterior motive, so that just happened that way. These next two films are about three men.

Perry Seibert is a movie lover, freelance writer, and founding member of the Detroit Film Critics Society. Follow him on Twitter @Perrylovesfilm.

"A Quiet Passion" opens at the Michigan Theater on April 21. Visit michtheater.org for tickets and showtimes.