Exploring the vibrational universe of Avram Fefer and Michael Bisio 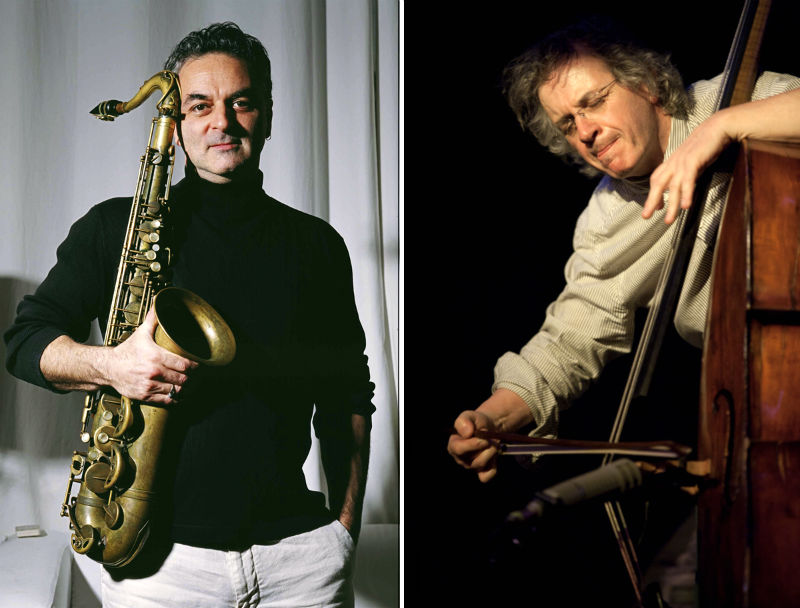 If saxophonist Avram Fefer can play a compelling duet with a towering wall of sheet metal, chances are good he sounds great improvising with just about anyone. Which sets the bar pretty high for tonight's Kerrytown Concert House performance with longtime collaborator bassist Michael Bisio.

Fefer was recently in London for the latest session in his Resonant Sculpture Project -- which he described by email as "a series of immersive, site-specific performances exploring the relationship between improvisation, space, acoustics, permanence, and sculpture" -- during which the reedman plays at, around, and sometimes within the large-scale, minimalist creations of sculptor Richard Serra.

It's easy to imagine tonight's show going more like a conversation between old friends who happen to be experts in their fields; a two-person TED Talk on intersecting disciplines as told on reeds and strings.

Or as Bisio put it by email, "Both Avram and I tell a good musical story."

The two players, composers, and bandleaders have been telling that story together in some form since the 1990s, either in Bisio's Quartet or as a duo. Fefer's lyrical approach to sax and bass clarinet effortlessly folds in several styles to create an organic, singular sound that pairs perfectly with Bisio's limber double-bass lines and expressive bowing.

We talked with Fefer by email -- with Bisio chiming in, too -- about developing his rich, varied style; composing and tracking the duo's lone solo record in roughly 25 years of playing together; and how he got started jamming with inanimate objects.

Q: There's a really fluid blend of sounds in your playing -- from blues to Ethio-jazz to European "out" -- that all sounds very natural together. How did you come to appreciate and digest these diverse styles? Do you think in these terms when you're writing and improvising, or is it based more on feel?

Fefer: I’ve been told my playing shows a wide variety of influences. I guess I’m not surprised since I have had the pleasure of listening to and playing a lot of different music over the years. My earliest influences were Stanley Turrentine, Grover Washington, Stevie Wonder, Ohio Players, and all sorts of funky music. Later I became obsessed with a variety of sophisticated jazz, including straight ahead, free, and avant-garde. I lived in Paris and Barcelona for a few years and was introduced to an abundance of African Music -- North, West, East, and South -- but, honestly, I was not attracted to European improv at that time because as a young aspiring musician I was extremely focused on playing with my fellow Americans and learning from them. People like Bobby Few, Alan Silva, Archie Shepp, Kirk Lightsey, Steve Lacy, John Betsch, Rasul Siddik, etc.

I’m sure my music has been informed by my travels throughout the world, my embrace of different languages and cultures, and the huge influence of other arts, like literature, cinema, painting, dance, and sculpture. My main interest has always been producing music that is authentic, heartfelt, provocative, and organic. It needs to be approachable on different levels -- intellectually, spiritually, and physically. So long as these criteria are met, style is not really relevant.

Q: How did you and Michael first come to work together and what has kept it interesting for the two of you over the years?

Bisio: It was so long ago neither of us remembers the first time, but certainly in the early '90s we'd do West Coast dates. I was living in Seattle and Avram would come for visits. He was living in Paris and/or New York at the time.

Both Avram and I tell a good musical story. Therein lies the interest, not only for us but for everyone willing to journey with us. We also share a deep level of commitment to this music and strive to continually grow within its borderless parameters an entire vibrational universe.

Q: I could only find one duo recording of the two of you -- 2005's Painting Breath, Stoking Fire -- what were those sessions like to record, and why haven't there been any more since? Any plans to get back into the studio, just the two of you?

Bisio: I returned to New York in August 2005. If memory serves, this session is from earlier that year, maybe January. In addition to our duo, I was leading a quartet at the time with a front line of Avram and Stephen Gauci. Jay Rosen and I were the rhythm section. We were all part of the Cadence/CIMP (Records) stable, having recorded both as leaders and sidemen numerous times. Producer Bob Rusch wanted one Michael Bisio Quartet and one Fefer/Bisio Duo recording, both from the same couple of days. It was bitter cold that January in the North Country (of New York), and the fire in the Spirit Room (recording studio) was blazing on many levels. This situation had a profound impact on both recordings. The warmth of the studio was instantly vaporized by the stinging cold -- negative 14 degrees Fahrenheit. Waiting outside, your breath would simply hang in the air. Thus Painting Breath, Stoking Fire.

Fefer: We’ve only recorded one duo album, but we have five albums together as the Michael Bisio Quartet and have performed so many times as a trio and duo that I’m sure another small group document is not far off.

Q: There's a beautiful restraint to the playing on the album that's well demonstrated a little over halfway through "BC Reverie/Inner Child." It sounds like you're both playing free during this big climax, but it's still so controlled. How much thought goes into setting and keeping a tone like that, and how does locking in with another player at that same, measured pace work?

Fefer: I wrote the 60-minute suite that comprises the album specifically for Mike and I. I wanted to document a variety of ways we approach the duo format, including using a number of different textures and woodwind pairings with Mike’s bass. I think Mike would agree that most of the thought goes into the written material and choice of musicians. After that, we are expected to think, play, listen, and feel the music on a level that we’ve grown accustomed to in our travels and here in New York City.

Q: Where did the idea for the Resonant Sculpture Project come from, and what has the response been? Are there any sculptures you'd love to try playing with and haven't gotten to yet?

Fefer: I was performing with sculptures in the Hamptons, just outside of New York in 2012. I noticed that there were powerful acoustic effects produced by the sculptures as I was playing. This gave me the idea for my project, and I began searching for the best pieces to work with. I had always loved Richard Serra’s work and soon found that many of his sculptures were not only profoundly inspiring but also perfect for exploring sonic resonance with a live audience.

Musically, the challenge is to create a coherent improvisation that is expressive and compelling, while remaining open and responsive to the effects produced by the sculpture. I recently returned from London from what was probably the best event so far, and I have a list of 20 different Serra pieces around the world that are perfect for the project. My production team and I are in the midst of planning the next events now.

The audience reaction has been incredible at these events, and it’s especially rewarding to be able to share the excitement and surprise of live performance, sculpture, and sound exploration together.

Q: What else are you excited about working on currently or do you have coming up down the road?

Fefer: Mike and I have a trio with Michael Wimberly that will play more in the future, and I am supposed to go to Paris to play with my old friend Bobby Few, with whom I’ve recorded a number of albums. I will continue to play regularly with Adam Rudolph’s Go:Organic Orchestra and Greg Tate’s Burnt Sugar, two very different, but equally amazing ensembles.

I am especially excited about two recent projects of my own that are in the middle of recording our first albums. One is a four-piece abstract, electric groove ensemble called Rivers on Mars that features laptop, electric guitar, drums, and myself, and the other is a three-piece African Chamber Ensemble, featuring percussionist Tim Keiper on Malian ngoni (string instrument). These groups are on opposite ends of the sound spectrum, but I love them both and they are equally challenging to me as a player.

I also continue to play with my six-piece Afro-funk project Big Picture Holiday, which features Kenny Wessel and Alexis Marcelo, among others. Our debut album (Shimmer and Melt) came out last year on Ropeadope Records and, thankfully, people seem to love it!