The Ann Arbor Art Center’s “Whipstitch: The State of Contemporary Textiles” does the rather nifty trick of reimagining yesterday’s art today through a conceptualization of what may be the art of tomorrow.

Granted, this notion may sound convoluted, but it’s really quite simple: Fiber, like architecture, can reasonably vie as the oldest of all arts. The reason for this is quite apparent with little consideration.

Yet the art of fiber (like another such ancient art, ceramics) has been essentially aesthetically dormant for millenniums -- and this is also for the same reason already considered. For as a practical artisan regard, fiber’s use has been largely defined rigidly as either being functional or fashionable with little thought outside of this.

Leave it to that most unpredictable of all centuries -- namely the 20th century -- to shake the weight of history from this sort of art. Then add the increasing iconoclasm of our contemporary post-modernism to shake that weight off the art form -- and we now indeed have “Whipstitch.”

It’s a particularly accurate title because what the artists in this exhibit have done is amalgamate as many differing mediums and media into their fiber art as seemingly imaginable. The result is a display that’s only fiber at its extreme, but also curiously sincere in its homage because these works wouldn’t exist without their fiber application.

As such, major props are owed to curators Thea Augustina Eck (Ann Arbor) and Rachel Anna Walker (Brooklyn, N.Y.) who have pulled together this international display of fiber by other means. Eck is a mixed media artist working in digital fabrication and Walker is a textile designer and design consultant who specializes in weaving, screen-printing, and embroidery. Their “Whipstitch” is that rare exhibit that realizes their concerns.

So, what to make of this decidedly novel show of art? 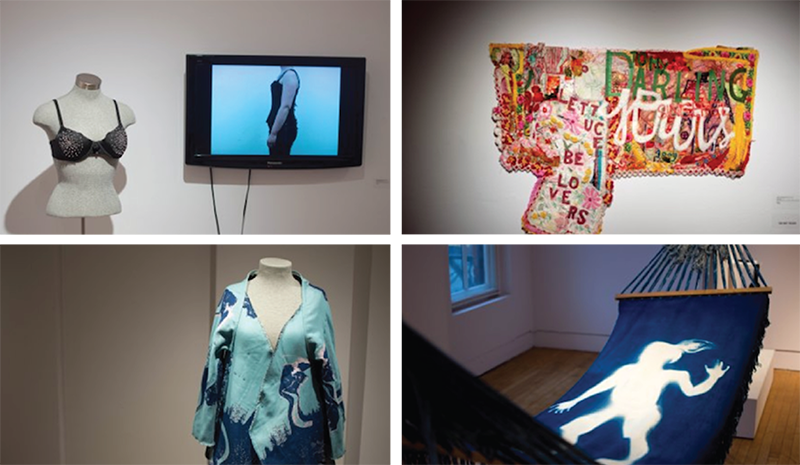 Eck and Walker’s joint statement says it best: “Whipstitch” explores “contemporary approaches to making and using textiles, where centuries-old traditions serve as the foundation and concept behind embroidery, quilting, weaving, and mixed media sculpture. ... The methods of making are expanded upon with the assistance of digital language, tools, and machines.” Eck and Walker conclude with, “[A]rtists are pushing the boundaries by commenting on the process of making and redefining the purpose of textiles, while also paying homage to its rich and varied traditions.”

Sure enough, there are indeed time-honored applications of textiles. Libs Elliott’s cotton fabric star clustered “Exploding Stars Quilt” serves as a visual motif for the exhibit facing the viewer when visiting the Ann Arbor Art Center's upstairs 117 Gallery. Erika Lynn Hansen and Wes Kline’s handsome diaphanous woven linen “Apparently the Fog has something to do with it: 5” is a turquoise-tinged chromatic delight hanging off the gallery wall. And Michelle Stephens' cotton yarn, woven jacquard fabric “Color Cloth: Reversible” is a time-honored crafting assisted by design tool coding that dictates the work’s geometric imagery and color palette.

Among the clothing on hand is Isabella Amstrup’s striking jacquard woven garment “Sep 61” where she’s photocopied a found photograph and uploaded the image as a collage pattern that serves as the design of her clothing. Alexa Adams and Flora Gill’s “Finale Dress” crafted from frosted plastic gives this gown a physical malleability that sways in company with its use. And a special shout-out to Ann Arbor’s Heidi Kumao whose 180 multicolored LED lights “Audio Activated Bra” is triggered by an audio signal.

Certainly among the most adventurous artworks on display is EJ TECH’s hardworking intervened textile and assorted electronics “Soft Sound” where two sensors are activated by sound so that they dance across their copper-embossed fiber spirals. The same could be said of Reed Esslinger’s handwoven cotton, maple hammock, cyanotype, and audio “Dreamer (Series) No. 1: Maitena Esslinger-Payet” as well as Rebecca Ringquist’s “Send Katy” and “Valentine” hand embroidery and machine stitching on found fabrics that explore identity and social issues through sculptural applique.

My favorite textiles in the exhibit are Anna Von Mertens’ hand-stitched cotton “View II” and “View III.” Von Mertens textile manner is to combine modernist abstract expressionism’s gestural action by relating this aesthetic to splayed interpretations of cosmological superclusters. The result is striking oversized hanging fabrics whose dark recessed background is brilliantly contrasted against subtle hand-stitched minimalist curvilinear eddies. The past certainly meets the future in this inspired whipstitch.