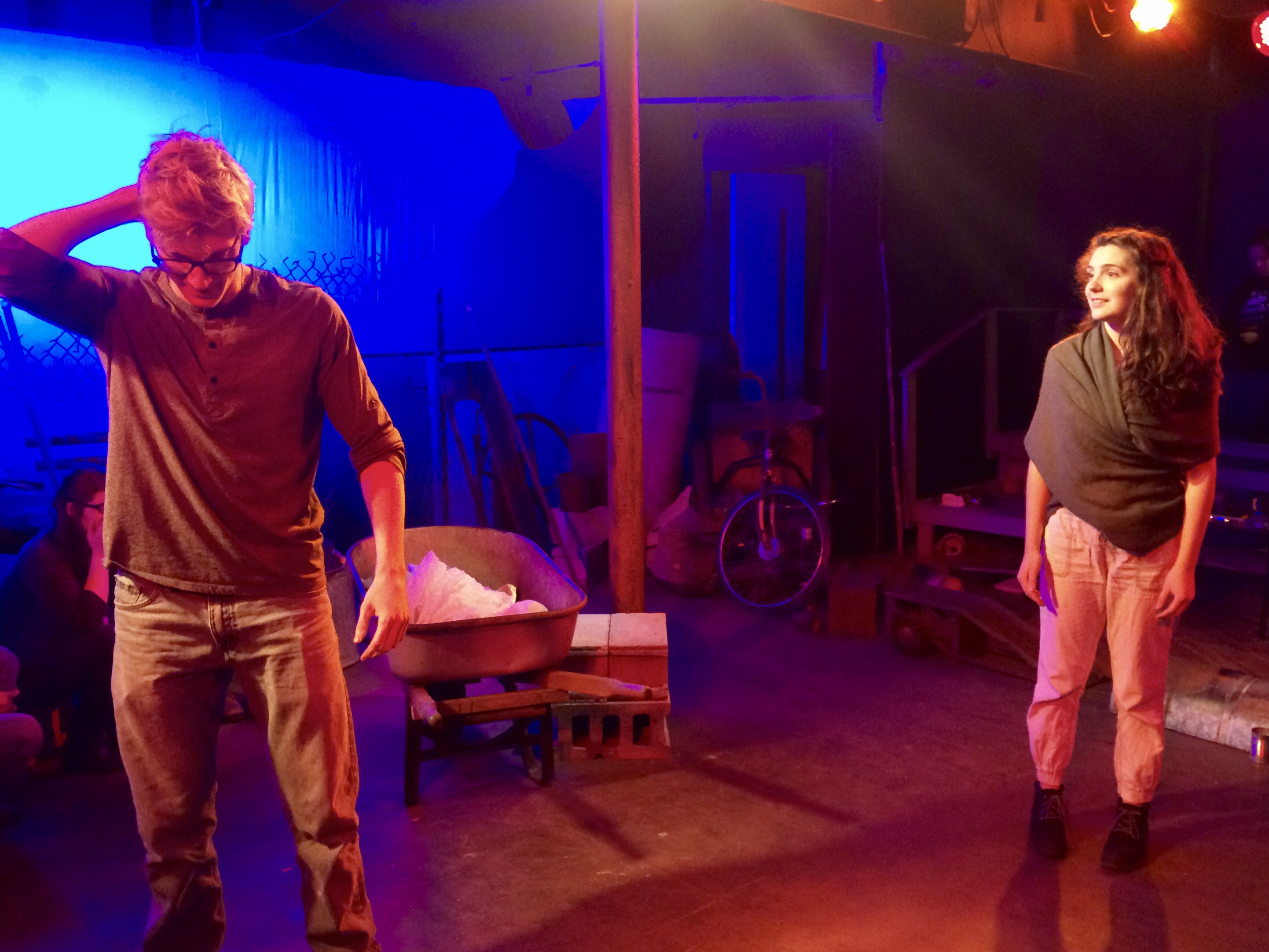 Bertolt Brecht’s canonical 1944 text The Caucasian Chalk Circle is the kind of play that many of us read in a college course but rarely see produced.

So it’s worth noting that locals will have the opportunity to see Circle on the stage when Ellipsis Theatre Company presents it at the Yellow Barn from May 4-21.

“Ellipsis is always very interested in the act of storytelling … so the fact that it’s so explicit in this play was appealing to us,” said Ellipsis co-founder Joanna Hastings, who’s both playing a role in and co-directing Circle with Scott Screws. “Plus, (Circle’s) so flexible. You can do it in all sorts of ways.”

Circle begins with a prologue. In the wake of a Soviet delegate settling a World War II-era dispute over land, a storyteller steps forward to tell what happens when a Caucasian city’s political revolution ends with a poor kitchen maid (Grusha) fleeing a castle with the assassinated governor’s new baby (Michael). Grusha makes tough sacrifices to keep Michael hidden and safe, but when the war ends and those who previously held power are restored, the baby’s mother comes for her son. She needs him to claim the former governor’s estate, but Grusha has come to love the boy, and the situation leads a similarly beleaguered, war-tested judge to stage a custody test involving a chalk circle.

“It’s so relevant to the situation we’re in today,” said Hastings. “I wanted to do something that’s not a political rant, but rather would help people think through what we’re facing, and what our values and priorities are.” 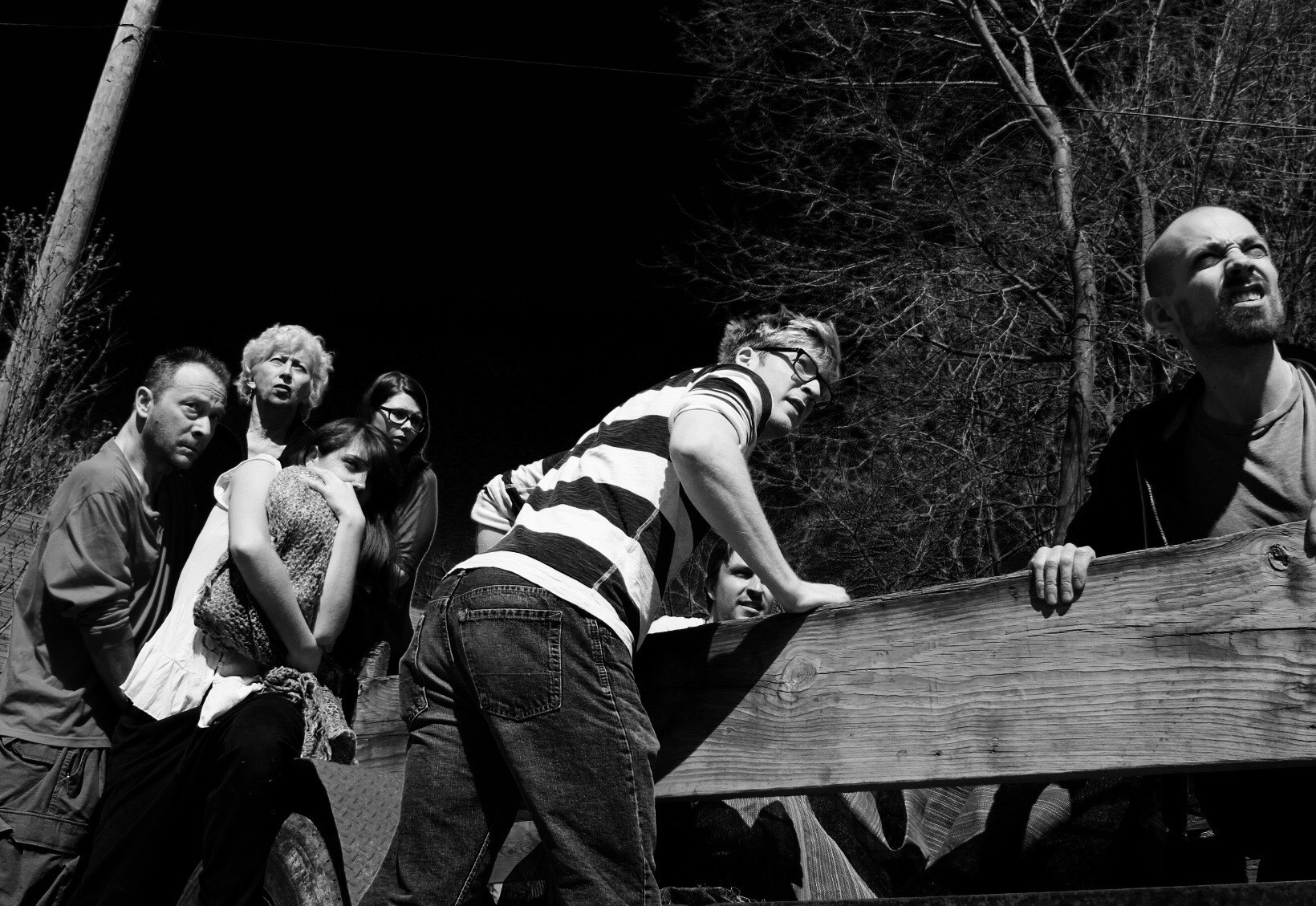 The cast of The Caucasian Chalk Circle doesn't look at the play's dispute in black and white.

Hastings and Screws have taken the liberty of updating the play’s original dispute between goat farmers and fruit farmers into a conflict between conservationists and pipeline workers. And because music plays a role in the play, the co-directors have worked with the cast to create new music for the production.

“It’s not a musical, but more a play with music,” said Hastings. “We developed the music over the course of several evenings, and we had a lot of fun with it. … People came over and brought their instruments, and we jammed. We just played together until things kind of came together.”

And while we tend to think of canonical works as musty and stiff, Hastings is quick to add that there are definitely laughs in Circle (“There is a lot of very broad comedy in it,” she said), as well as elements related to Brecht’s trademark “alienation” effect, whereby the audience is repeatedly reminded that they’re watching actors in a play.

“Part of that happens just by virtue of the fact that you have eight actors playing dozens of roles,” said Hastings. “Really, there’s no point in pretending that it’s not a play at that point. … And when we’re on stage, we’re changing hats and grabbing things out of a trunk. The whole stage set itself is a junkyard. It’s the detritus of war, with rusted ammo boxes, an old, rusted motorcycle – all kinds of stuff. The remnants of what was there during and before the war.”

And while Brecht’s aim in keeping the audience aware of a play’s artifice was to keep theatergoers thinking critically, not just responding emotionally, Hastings confesses that a story like Circle presents a challenge to that.

“Caucasian Chalk Circle is an intense story,” she said. “You’ve got this warm, decent woman who saves a baby at the play’s core. It’s really hard not to respond emotionally to that.”

Ellipis“The Caucasian Chalk Circle” plays Thursdays-Saturdays at 8 pm and Sundays at 2 pm through May 21 at The Yellow Barn, 410 W. Huron St., Ann Arbor. Tickets cost $15-$20, available in advance at artful.ly.