Slow Tide of Decline: Lauren Hulthen Thomas reads from her debut at Literati 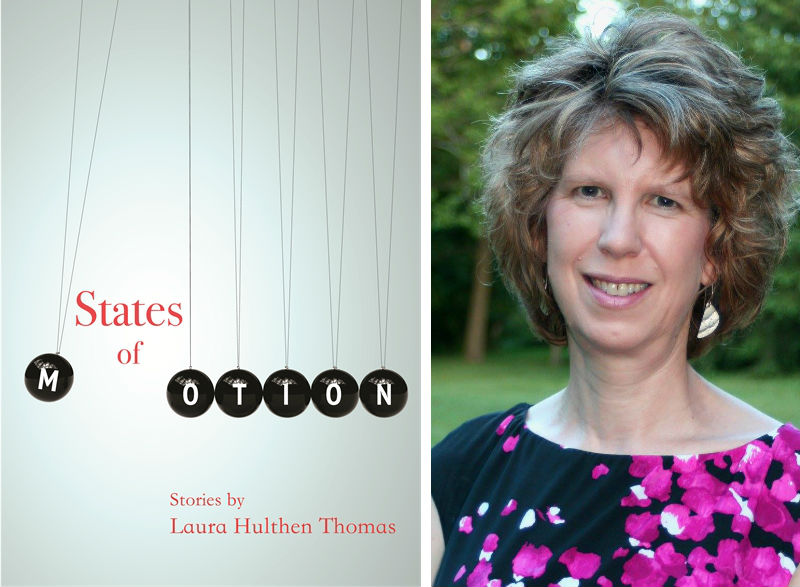 Laura Hulthen Thomas' reading from her debut collection, States of Motion, at Literati on Wednesday, May 17, will be special to her. “I was one of the last authors to read at Shaman Drum, the iconic indie bookstore that was the last downtown seller to shutter," said Thomas, the head of the creative writing and literature program at the University of Michigan’s Residential College.

"Honestly, I didn't think another bookstore would ever take a chance on a Midwestern downtown, even a literary city like Ann Arbor," Thomas said. "Thank goodness [owners] Hilary and Mike [Gustafson] have the vision and passion to make such a success of this marvelous store. And having a beautiful reading space to showcase authors and even host student readings and other community events is just incredible. ... I would love to thank Literati for hosting me, and for being downtown’s literary light and gem."

We chatted with Thomas about how Michigan is reflected in her stories, how that’s shifted in the recent political climate, the Midwestern voices that have inspired her writing, and more.

Q: The themes in these stories seem to resonate especially with the current political climate, but of course you wrote the collection before the presidential election. What inspired this thematically connected writing as you were first working on these stories?
A: Thanks for this question! I think this insight points to just how long Michigan has been struggling. While the election's outcome felt like a tsunami for some, Michigan’s shift to red feels more like the inevitable result of the slow tide of decline. In writing States of Motion, I was interested in objective declines, like job losses, and perceived declines that may really be coming from a character’s own choices but feel imposed by circumstances outside of their control. The blurry line between personal and societal trouble is what connects these stories; the way characters act when they lose what held their lives together, see their relationships stressed, feel viewed with suspicion rather than compassion by their neighbors, by the authorities. Sometimes, as Perry does in “Sole Suspect,” a character will embrace the very stereotype his neighbors make of him and become the face of his community's worst fear.

Many of these stories had their first life during the post-9/11 shift to war footing, and others came into being just after the recession. I wanted to write about some lesser-known consequences of economic turmoil, such as sequestration’s effect on medical research in my story “Lab Will Care,” and other, more well-known riptides such as the auto industry's perennial struggles that backdrop “Adult Crowding” and others. Some characters are scientists and engineers whose work involves physical or natural laws that are reliable constants, a disconnect they feel intensely when faced with the less transparent laws of economics, not to mention love. The ways my characters make sense of their lives have disappeared and are simply never coming back, no matter who promises them otherwise.

Q: Has your perspective on the book shifted since?
A: The election outcome confirmed for me that in so many ways Michigan was an overlooked harbinger of change. Southeastern Michigan, where my stories take place, is a regional mish-mash of cities, ‘burbs, and farms that bleed one into another within a few minutes’ drive. Some of these communities and farmlands have been suffering a long slow decline that seems unlikely to turn around, and others have survived and found ways to regain at least some prosperity. In our relatively small region, neighbors live cheek to jowl in different realities. Whether red or blue, they believe, with all their hearts, that the reality they experience is a fight for justice and even survival, either economically, socially, or morally. A relative handful of Michigan votes surprised the nation last November. With States of Motion, I hoped to portray Southeast Michigan as a place where this result is no surprise.

Q: While the stories take place in Michigan, some settings are real and some are fictional. I am struck by this. Why do you think you wrote these Michigan stories in both real and imagined Michigan realms? Or, what did you add or subtract to the fictionalized Michigan of your stories?
A: Thank you for this question; now I have to think about why I did this! As with many aspects of writing, at least for me, the choices of settings for each story were completely intuitive. In some stories, it felt right for Ann Arbor or a community nearby to be named, and in other stories, it felt right to have the setting be a fictional amalgam of several Southeast Michigan places. In some stories the town is fictional but as you point out, even in these stories some real features are swirling around in the imagined. Mostly, I think, this mix of the real and the fictional came down to the music of place. Certain roads names and landmarks strike the perfect chord, so why change them?

In the case of real settings, as in “State of Motion” and “An Uneven Recovery,” although again the choices weren't conscious, these stories look at economic and social changes in a relatively prosperous area that most readers recognize and have opinions of, so it made sense to me to allow the reader to bring their assumptions to these stories and characters. In “Lab Will Care,” the lab Emily manages is set at the University of Michigan. Of all the stories, this was the only one in which the setting was a deliberate choice. While everything about the story is fiction, and I’m sure inaccuracies abound, I did want to draw attention to our scientists’ commitment to research in the face of funding contractions and other difficulties. Threats to independent science are not new issues, but I feel these issues are under-represented in fiction. Since the impact is all too real, I wanted the place to be real, too.

I didn't consciously add or subtract anything as I was writing, but in fiction, exaggeration for effect is certainly part of making a place a character that the other characters have no choice but to respond to.

Q: Which Michigan or Midwestern literary voices have resonated with you or have provided inspiration for your writing about Michigan?
A: I love voices that bring psychic drama, the noise in a character’s head, heart, and soul, into a story's action and experience of place. Laura Kasischke does this so beautifully in her writing, as in her novel Eden Springs. Lolita Hernandez's stories masterfully blend the action of the mind with the action of the body. Her characters’ experiences are surreal, almost haunting, but remain grounded in the practical in a way I find both mimics real life and makes of it a dream. Kelly Fordon’s fiction and poetry explore the psychology of the witness, the interpreter of what is seen, and whether and whom to tell. I admire how her characters experience uncertainty about what they've seen, or what it might mean. Her writing about the wounds both witness and victim carry forward, and even share, is so moving.

Laura Hulthen Thomas reads from her debut collection of stories, "States of Motion," at Literati, 124 E. Washington St., Ann Arbor, on Wednesday, May 17, at 7 pm.