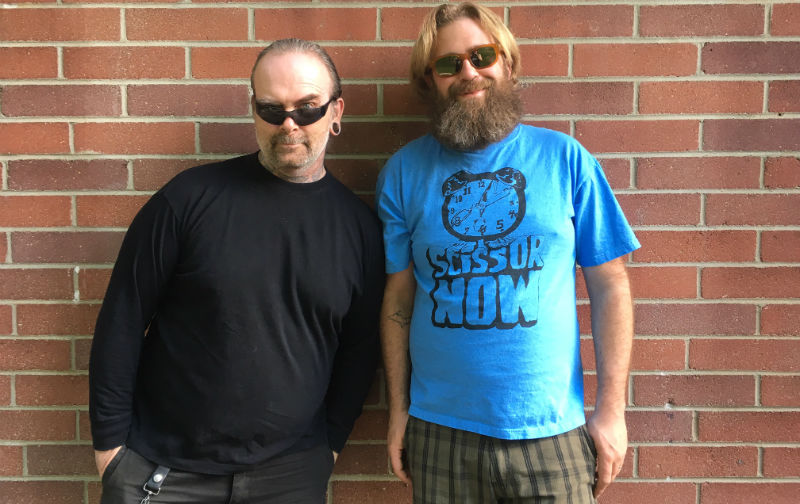 Q: How did the band get started? It's basically two-thirds of Zen Banditos, right? Was it as simple as Andy moving away and you two wanting to keep going, or did it take some time/trial and error to get to this point?

O'Neill: Yeah, pretty much. Andy Furda and we formed Zen Banditos after parting ways from the Mike Hard band. Andy has a really cool noisy, heavy psychedelic style on the guitar, and Jeff and I found our groove in the pocket and playing off of each other a lot, giving Andy the room to do his thing over top. After Andy made the move down to Arkansas, Jeff and I were already super comfortable jamming together, and it just seemed natural to keep going.

West: It was basically that simple. Since Justin and I meld together as a rhythm section so well, why stop true chemistry?

Q: The bass tone is so huge, and the drumming has so many things happening that it actually took me a couple of listens to realize this was just bass and drums and singing. How has losing the guitar affected the way you write?

O'Neill: It definitely has tightened us up. Jeff plays a riff, I’ll come up with a drum part. If we like it, we’ll expand on it. I’ve generally been in three-pieces in the past, so differing opinions and ideas were pretty easy to iron out. With a two-piece, it’s even easier. Jeff has hours and hours of music he’s written and recorded over the past two decades. I’ve heard him say, “I wrote that riff over 15 years ago,” several times. It’s really sweet to jam with a dude who knows his craft, has been doing it for so long, and there’s no bullshit involved. He’s the consummate musician.

I’ll let Jeff tell you why his bass sounds like that. I just hit things with sticks.

West: I got lucky achieving that tone. I just put the different Frankenstein rigs I have together. My bass runs through a guitar head into a bass cab, and the guitar tones are run through a bass head into a guitar cab, via a few pedals. I have really never used pedals before, and I am still getting used to it. There may be a POG (Polyphonic Octave Generator from Electro-Harmonix) or two involved in the mix.

Q: How does your history going back to playing in Mike Hard's band together play into what you do?

O'Neill: I was only playing in Mike’s band for a month or two. I’m pretty sure Jeff joined not too long before I did. Andy, who’d been playing with Mike for a couple years at that point, reached out to me to play drums for a couple of gigs. We played in Chicago and at Theater Bizarre. It was fun. Mike went a different route and reformed a different project with some guys he’d been playing with for years. Andy, Jeff, and I formed Zen Banditos.

West: Andy asked if I would want to jam [with Mike Hard] because their current bass player was exploring new ideas. Since Andy and I had jammed together before in ChristPuncher and Bonk, I said, "Yes," after not having played live with anyone in a decade. I am so glad I said yes because I would have never had the opportunity to jam with Justin.

Q: I hear what sounds like a pretty solid High on Fire influence in the vocals and intensity, but these songs are also super hooky. What are some recurring reference points for your sound? Any we might be surprised by?

O'Neill: For sure, you can hear a lot of the obvious influences in our music. High on Fire definitely, Sabbath, Melvins, older Clutch, etc. Honestly, I like a lot of random stuff. I'm a huge Ween fan, Mr. Bungle, The Yeah Yeah Yeahs, Jesus Lizard, Don Ellis, Santigold, Russian Circles, Bjork, A Tribe Called Quest, early thrash metal, early hardcore/D-beat. I could go on and on, but I'd say all the music I love sticks with me and influences me in one way or another.

West: For me, if it has a good melody and a strong groove, I dig it. I really dig a lot of different types of music, from jazz to funk to classical to rock, metal, blues, and try to incorporate that into what I play. It's all about how the riff makes me feel. Vocally, I wish I could sound like Paul McCartney in The Beatles' later years. ("Oh! Darling," "Helter Skelter") but that’s not gonna happen. So I do what I can.

Q: For the EP, it was interesting to me how a lot of the lyrics are very story-driven. Who writes the words and where do the stories come from? Are they exaggerations on real life or just pure fantasy?

O'Neill: Other than "The Fall" Jeff wrote all the lyrics. From what I can tell, they're all telling fairly fictional stories.

West: I will be the first to tell you I am not a lyricist. I can't write worth a shit. So my songs are pretty much just babbling about things I am thinking or see in movies. I get an idea and go with it. Yes, I do sing about weed a lot, because it's just so fun to sing about. It's not as evil as some would lead you to believe. Some of my best ideas are when I'm on that plane.

Q: From what I can tell, three of the four tunes are, in some way or another, about weed. I'm not positive on "Bio-Grey'd," but there seem to be clues. But "The Fall" is very clearly a call-to-arms of sorts for social justice and maybe Trump resistance. What was the inspiration for that song?

O'Neill: I wrote "The Fall." I just can't seem to write anything that isn't politically charged lately. There's a lot to be pissed about nowadays, at least for me and many others. It's a statement about how I'm feeling about different social issues -- systemic racism, cops beating and murdering people of color with impunity, Trump and his supporters’ dreams of a wall. That's the gist of that tune. If it inspires someone to speak up, write their congressmen or get out and protest, that’s awesome! It may be a little selfish, but it’s more of a way for me to get my thoughts and feelings out there.

West: "Hang Em' Higher" is loosely based on the Clint Eastwood movie Hang 'Em High. "Space Weed" is, obviously, about grass. "Bio-Grey'd" is purely sci-fi: creating a creature in a lab, and it gets loose and wreaks havoc on the world.

Q: What's next for the band? Any plans for a full-length?

O'Neill: A full length will happen. First, we wanna get the EP on vinyl, maybe a split with another band. Right now we're focusing on a handful of gigs, trying to raise funds for the vinyl, shirts, stickers, and other merch, and getting our music out there.

West: We are currently writing new material for [a full-length] and to extend the length of our set. And we just like jamming together. Why stop a fun thing?

Bubak plays Thursday, June 1, as part of FuzzFest 4 at the Blind Pig.