String Things: Wire in the Wood goes on the record with "All Fall Apart" 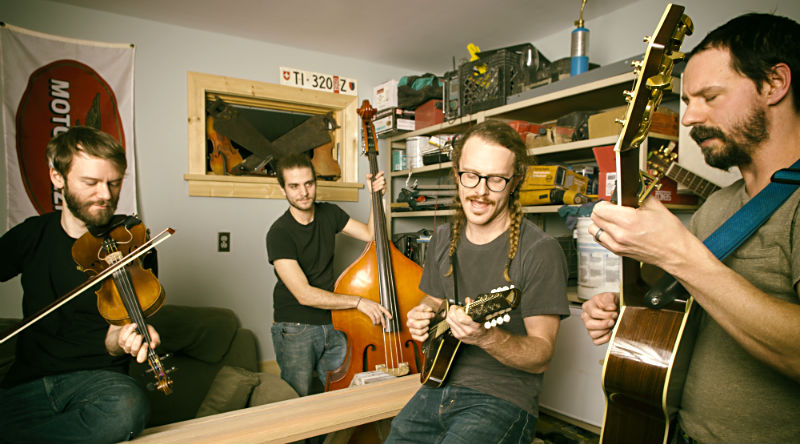 Wire in the Wood brings the strings to Taste of Ann Arbor (June 4) and ABC Microbrewery (June 5).

The Ann Arbor-based rootsy string band Wire in the Wood has been playing in various incarnations for around 10 years, building a reputation as a creative and skilled live act. But until this year, the group had never gotten around to releasing an album.

“At this point we probably have like 60 songs,” says frontman and guitarist Billy Kirst. “And maybe three years ago, I said, ‘I’m not booking any more shows until we record an album.’ So we didn’t play for a little over a year … and we recorded the album.”

Recorded at Jim Roll’s Backseat Productions and released earlier this year, the album, All Fall Apart, showcases Kirst’s songwriting and the virtuoso playing of all the band’s members, including Jordan Adema (violin), Ryan Shea (bass), and Michael Spaly (mandolin). The sound Wire in the Wood creates weaves together elements of bluegrass, swing, jam-band improvisation, and beyond.

Now, with one album finished, the band plans to continue recording regularly, starting a second album in October. A new song about the Flint water crisis might be released even sooner and will likely be featured in upcoming live shows.

The next few days offer two chances to see different sides of Wire in the Wood. The band will play the music stage Sunday, June 4, at the annual Taste of Ann Arbor outdoor festival, followed by a Grateful Dead tribute show Monday, June 5, at ABC Microbrewery (formerly the Corner Brewery) in Ypsilanti.

True to the band’s free-wheeling spirit, the quartet doesn’t play shows using a predetermined setlist, instead choosing songs from its repertoire right in the moment. Although Wire in the Wood draws on a deep selection of original songs, covers remain an important outlet. “We have a very good selection of covers,” Kirst says. “We like to take from a lot of different genres,” everything from “Django (Reinhardt)-style swing” to “straight-ahead bluegrass.”

All Fall Apart features entirely original songs. The title track sounds like it might have been inspired by the current political landscape, with lyrics like “One after the other, blaming another / Hiding behind opinion as cover …” Yet Kirst explains the song originated in the early days of the Arab Spring, watching some of the violence at the time. “What do you do? You’ve been completely oppressed for so long, you go ahead and set fire to your town. What drives people to do that?” he says. “You want to get to a civil, peaceful world, but what if the only way to get there is through war or destruction?”

Ultimately, Kirst says, the point of the song -- and part of what makes it sound so current -- is, “Yes, you’re right, there are serious problems. But let’s not beat up each other over it. Let’s look at what’s really going on.”

The epic-length closing song on the album, “Raindrops in a Cartoon Sunrise,” ends with a long instrumental jam that might offer the best example of the band’s live sound. “While we’re kind of based out of bluegrass and swing, we’re certainly all kind of inherently weirdos and into improvisation, so the ending is more a reflection of how we actually perform,” Kirst says.

“Raindrops” also had a long gestation before being recorded. Kirst dreamed up the first lines on a beach in Australia, then let it sit for 13 years before completing the lyrics, which contrast images of chaos and tranquility.

“You have those moments where everything just makes sense, and the hard part is holding on to those moments,” he says. “In the times in life when you’re just overwhelmed with stress or despair, you can tap into the fact that everything is all right.”

Bob Needham is a freelance writer and the former arts & entertainment editor for The Ann Arbor News and AnnArbor.com.

Wire in the Wood plays the music stage for Taste of Ann Arbor from 2:40-3:30 p.m. Sunday, June 4, at the corner of Main and Liberty streets in downtown Ann Arbor. The band also plays a Grateful Dead cover show at the ABC Microbrewery, 720 Norris St. in Ypsilanti, from 7-10 p.m. Monday, June 5.