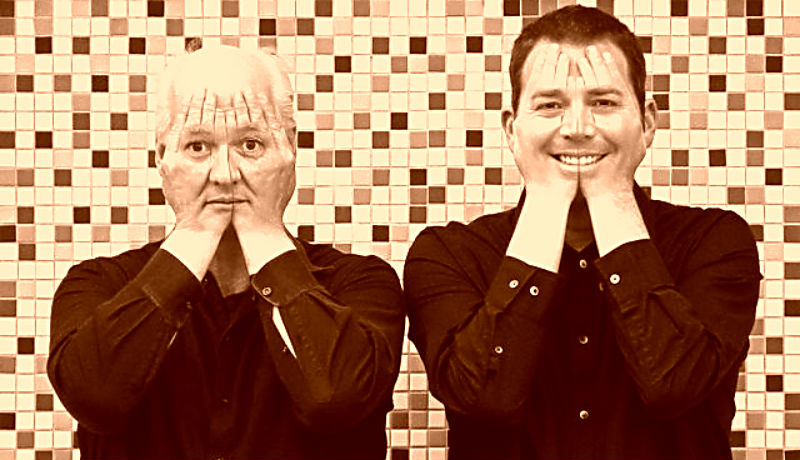 Sherwood, who now lives in Las Vegas (following a 26-year stint in L.A.), grew up doing theater in Santa Fe, but he wasn’t exposed to improv until he was studying drama at Wright State University in Ohio. “It was a three-man improv group, and I was blown away by them,” said Sherwood. “I thought it was so funny, how they would just make it up as they went. I got involved in a comedy troupe, but it was more sketch stuff. Improv was more of a writing tool than anything else.” But after college, when Sherwood moved to L.A. and got a job as a production assistant, a co-worker who was in an improv class encouraged Sherwood to get involved, too, and told him that he thought Sherwood would be good at it. “I owe that guy for my career,” said Sherwood. “I signed up for the class, and it was like, the clouds parted, and a ray of light shone through, telling me that this is what I was meant to do.” This training led to a kind of improv comedy boot-camp lifestyle wherein Sherwood regularly performed in five shows a week. “It was the improv equivalent of being in a band before they get their big break.” Mochrie, based in Toronto, was also studying theater when he got his first taste of improv. “To be a good improviser, you have to do everything you don’t do in real life,” said Mochrie. “You have to really listen to people and accept their ideas and build on them. The hardest thing to do when you’re staring out at a theater full of people is to let your ego go. If I have a great idea, but my partner gets theirs first, I have to just drop mine and support them.”

Mochrie, like Sherwood, has pursued a variety of different kinds of projects during his career, but the appeal of improv comedy has never waned. “It’s the thing I certainly enjoy most,” said Mochrie. “Every show is totally different, and every audience is different, so you can’t get bored. It always keeps you on your toes.” “Every performance is, in a sense, like an opening night,” said Sherwood. “It’s the equivalent of jumping out of an airplane. If you’re not getting a rush from people paying to see you be funny, then something’s wrong. It’s always fun. Both of us love making people laugh, and we both have that internal ham in us.” But some attention Mochrie received earlier this year had nothing to do with creative work. In January, the improv star tweeted:

My 90-yr-old mother-in-law and 87-yr-old mother love and acceptance of our trans daughter warms me. Wonder why some who are younger can't.

Though online trolls did their usual thing, Mochrie -- who reportedly just wanted to put something positive out in the world, and had asked his 26-year-old daughter if she’d be OK with the tweet before posting it -- said that the response he got from fans and followers was overwhelmingly positive. “The great thing about (Mochrie’s wife) Deb and (daughter) Kinley and me is, we’ve always been very close, from day one,” said Mochrie. “We’ve always been a tight unit. … (Kinley) always tells us about what’s happening in her life, and she’s a great person. Ultimately, that’s what I’m proudest of.” In auditoriums now playing host to Sherwood and Mochrie’s “Scared Scriptless Tour,” though, audiences seem conflicted about whether they want the current polarizing political climate to be part of the comedy or not. “We try to stay away from politics for two hours,” said Mochrie. “We want the show to be an escape from that, and many people are appreciative of that. But then someone in the audience will suggest Trump for one of the games. … Once, when Bush was in power, Brad made a joke that seemed pretty inoffensive -- it was just one line -- but you could feel the audience splitting in half. It was really weird. Comics have a long history of making fun of presidents, but it feels like something you can’t do now.” This comedy quandary adds an extra layer of difficulty, as does the fact that Sherwood and Mochrie have no additional players on stage with whom to work. “It doesn’t put more pressure on us, but it does force us to be more innovative with the games,” said Sherwood. “That’s why we’ll take hybrid parts of different games and try to turn them into one. … That’s been one of the fun parts of doing these shows. We’re crafting some things that didn’t exist before.”

"Whose Line is It Anyway?" stars Brad Sherwood and Colin Mochrie will appear Saturday, June 24, at 8 pm at the Power Center as part of the Ann Arbor Summer Festival’s main stage series. Tickets start at $45. Visit a2sf.org for tickets and more info.