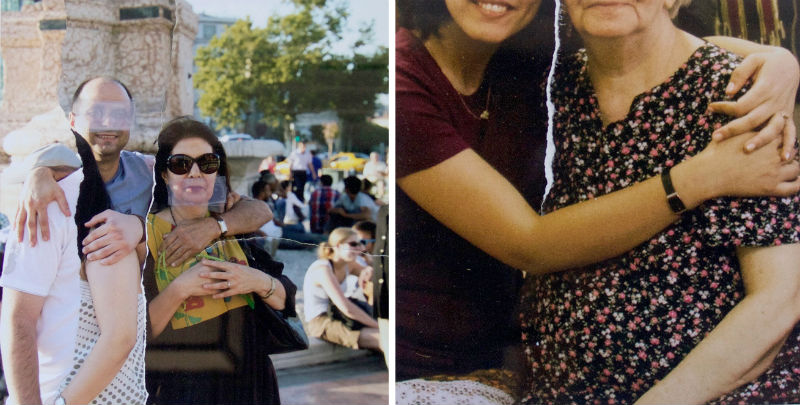 The manipulated photographs of Ebrahim Soltani (left) and Parisa Ghaderi help explore the messiness of memory.

Photographs are haunting; they are aching evidences of our relations with those who are gone. However, through photographs, we do not remember the past: we invent the past.” --Parisa Ghaderi & Ebrahim Soltani

For the month of June, YES!, an experimental gallery located at 8 North Washington St. in Ypsilanti, will host Waiting for the Past, an installation of videos and photographs created by visual artist Parisa Ghaderi in collaboration with social scientist, writer, and photographer Ebrahim Soltani. The exhibition is sponsored by the Ann Arbor Awesome Foundation and will provide the space with permanent sound and lighting equipment to support future public art projects at the gallery.

Waiting for the Past is the first collaboration of this creative team. Asked if they plan to work together in the future, Soltani replies with an enthusiastic “Absolutely!” They say they particularly enjoyed writing the poetry that dots the wall of the gallery and they hope to continue to create work for a publication.

The friendship and collaboration of the two Iranian emigres on Waiting for the Past grew from their parallel immigrant experience and the recent loss of a parent by each. Ghaderi lost her mother to cancer in 2011; Soltani’s father passed away in 2015. Both parents died in Iran after Ghaderi and Soltani had emigrated to the United States.

Soltani’s relationship with his father was somewhat remote.

"I had a very complicated and challenging relationship with my father and a lack of deep communication," he said, "and he was in a sense absent from my existential life for a long period of time. When he [died] he was much more present [in my mind] than when he was alive. I had dreams about him, memories came back and I have been talking about him for 2 or 3 years now."

Ghaderi’s relationship with her mother was much different. "I was close to her. She was very young when she passed away -- only 54 -- and she looked very young, so everybody thought we were sisters when we were together," she said. "We were close but at the same time, we had this emotional distance. It was a little complicated. ... She was diagnosed with breast cancer, but in all those years when my immigration status was changing I couldn‘t leave the country, so she hid it from me. She was so considerate of my situation."

In spite of their contrasting experience with parental relationships, Ghaderi and Soltani share a sense of geographic dislocation as a metaphor for emotional distance. Soltani, a soft-spoken man with a warm manner and a professorial air, explained, “We both had this feeling that when one of the parents leaves, the family dynamics change radically. The sign of some kind of earthquake you see in [some of the] the photographs is a symbolic representation of that feeling of loss and change, and the reconfiguration of the family [after a death].”

Waiting for the Past features two large projected videos and a series of snapshots of family groupings. The videos fill two walls of the gallery and feature slow-moving torsos and arms of mysterious, larger-than-life figures dressed in black. Over several minutes, the figures’ arms change position, and each video ends with a departure.

The series of small photos arranged on the wall of the gallery have been torn apart and reconstituted to illustrate the changing dynamics and relationships of family members over time. In one particularly telling photo, Soltani embraces his son, while his mother stands next to him. The arm around her is that of Soltani’s father, who has been excised from the picture. Translucent tape covers Soltani’s eyes, his vision metaphorically occluded by his relationship with his father; his mother’s lower face is likewise obscured in reference to her voice, lost in a male dominated society.

One of the most formally inventive aspects of the installation is a scanning bed upon which several ripped up and recomposed snapshots are arranged in a grid fashion on top of the glass screen. As the light from below travels across the bed, images that were invisible become visible, ghosts of the departed returning. In these recomposed photos, it’s possible to create remembrances of a past that never was -- in one picture Ghaderi’s mother and Soltani’s father are posed sitting side by side, though they never met.

While a feeling of loss permeates the work in this installation, there is the sense also of something to be found. In each of these photos, the past is reimagined and offers a potential clue in the search for the answer to Soltani and Ghaderi’s existential question: “Who am ‘I’ without you?”