Red Scare: Glenn Frankel's "High Noon: The Hollywood Blacklist and the Making of an American Classic" 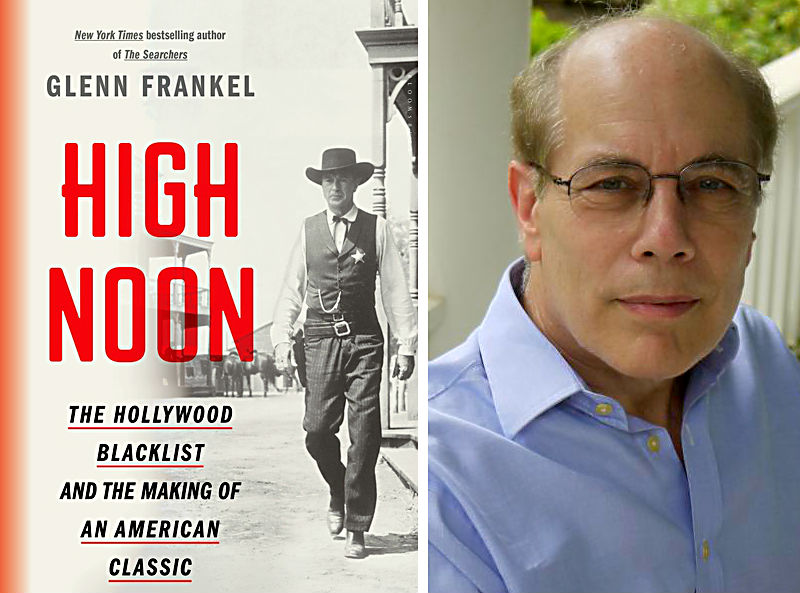 Each year we hear about how political the Oscars are, but this may have never been truer than in 1953 when High Noon scored big with critics and moviegoers the year before (and earned seven nominations), but also found itself in the crosshairs of the House Un-American Activities Committee.

“There was a campaign to make sure (High Noon screenwriter Carl Foreman) didn’t win, because that would be too embarrassing,” said Pulitzer Prize-winning journalist Glenn Frankel, who just published High Noon: The Hollywood Blacklist and the Making of an American Classic.

Frankel will talk about his latest book at the Westgate branch of the Ann Arbor District Library on Friday, June 23 from 7-8:30 pm.

High Noon, now considered an American classic, starred Gary Cooper as an Old West marshal (William Kane) who’s about to retire and leave town with his new, young, Quaker bride, Amy (Grace Kelly, in one of her first movie roles), when he receives news that a killer he caught and sent to prison has been released and is on his way back to town, on the noon train, to seek revenge, alongside three of his henchmen. Kane tries to form a posse, but as he makes his way around town, he quickly realizes that, despite his service to the town, no one is willing to stand with him.

There were some similarities between the initial four-page treatment for High Noon and a published short story by John Cunningham called “The Tin Star,” so Foreman purchased the story’s film rights. But when Foreman received a subpoena to appear before HUAC during the month-long filming of High Noon in fall 1951, the character of Will Kane secretly, but pointedly, evolved to become a fictional stand-in for Foreman, who found himself being abandoned by friends and colleagues in Hollywood.

“(Foreman) was careful not to tell anybody that or it would have killed the movie,” said Frankel. “But a couple sets of people figured it out. You had right-wingers like John Wayne and columnist Hedda Hopper doing the math of, Foreman was once a member of the Communist Party, he wrote High Noon, therefore, High Noon is a communist movie. That was their sense of how the world worked.”

But Foreman, who self-exiled to London after refusing to provide names to HUAC, wrote a letter to New York Times movie critic Bosley Crowther, who’d already sung High Noon’s praises in a review. “That next weekend, there was a Sunday weekend piece talking about the movie, saying that courage is what it was really about and that people in Hollywood could learn a lot about courage from watching High Noon,” said Frankel.

As is often true with McCarthy Era tales, a friendship came apart as High Noon was coming together and the rift was never mended. Producer Stanley Kramer built a highly successful independent production company, working alongside Foreman, whom he’d gotten to know while working in the Army’s film unit during World War II. High Noon, as it happens, was to be Kramer’s last indie production before jumping into a big contract with Columbia Pictures -- one last, quick, cheap hurrah -- but Foreman’s refusal to cooperate with HUAC caused a rift between him and Kramer. Even so, Kramer couldn’t kick Foreman off High Noon while it was still in production, for financing reasons.

The screenwriter emigrated to England before the movie’s release in theaters and the two men reportedly never spoke again.

“Kramer’s people didn’t want (Foreman) to win, and (director Fred) Zinnemann didn’t win,” said Frankel of the 1953 Oscar race. “Cooper won best actor, but he was part of Hollywood’s royalty, and a conservative, so even though he was an ally of Foreman’s, they were happy to support him. It also won best theme, best score, and best editing. So it won the safe ones, the easy ones. It didn’t win the ones that would have validated the movie. And that’s no accident. There was a lot of quiet campaigning going on.”

High Noon was distinctive for being a western that broke genre rules. It didn’t have beautiful landscapes, but instead had a gritty, documentary feel; there’s little action, until the iconic gunfight at the end; a woman saved her man, instead of vice versa; and at a time when most movies were in color, Zinnemann chose to film in black and white. Plus, before the movie even appeared in theaters, its opening theme, “Do Not Forsake Me,” was a huge hit.

So it had an awful lot going for it; but Foreman -- who, after two Oscar nominations for other films, had drawn more attention to himself -- had been part of the Communist Party more than a decade earlier, and that was enough to temper its success.

“The real attraction of the Communist Party, and the left in general, was during the Depression when things were breaking down and people were looking for answers,” said Frankel. “After the war, things began to change. The war ends, the Soviets develop the atomic bomb, a nuclear arms race gets underway, there’s brutal fighting in Korea -- by 1951, it’s hard to overestimate how much anxiety and fear of communism there was, and people in power exploited that.”

Frankel places some of the blame for HUAC’s successful, sustained reign of fear at journalists’ feet, but he also notes that politicians used what they’d gleaned about journalism’s conventions, parameters, and timelines to put their cause in an advantageous position.

This still occurs, of course. And in an interesting twist, conservative talking head Ann Coulter recently compared Donald Trump to none other than Cooper in High Noon.

“Works of pop culture can be used and abused in all kinds of ways,” said Frankel. “But it’s helpful to know where a work comes from. … I like writing about pop cultural history and its relationship to the larger culture, because I think we learn things from that, and it’s interesting to see how they interact.”

Glenn Frankel will talk about "High Noon: The Hollywood Blacklist and the Making of an American Classic" at the Westgate branch of the Ann Arbor District Library on Friday, June 23 from 7-8:30 pm.