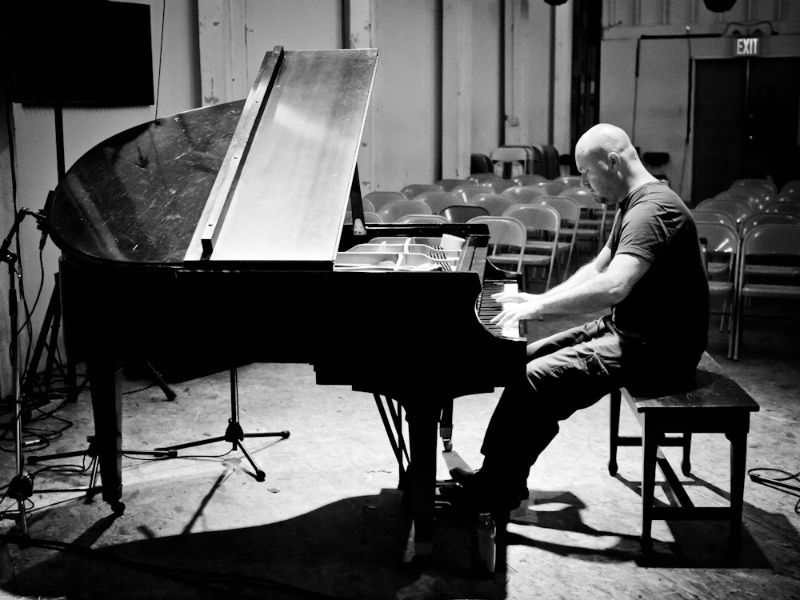 This article on June 28, 2017. We're re-running it because McDonas is returning to Kerrytown Concert House on Thursday, November 7, and he'll again collaborate with local improvisors Piotr Michalowski and Abby Alwin for an evening of spontaneous music.

Thollem McDonas might be a compulsive collaborator. The American pianist, composer, keyboardist, songwriter, activist, teacher, and author's many projects have included several renowned, and lesser known, players over the years, and he doesn't seem to be slowing.

McDonas plays Kerrytown Concert House on Thursday, November 7, with a trio completed by two accomplished locals: reedman Piotr Michalowski and cellist Abby Alwin. We talked with the restless, and very thoughtful, pianist by email about his many collaborations, balancing political action with music, and sitting down at Claude Debussy's piano.

Q: You began playing piano at a very young age. What first drew you to the instrument, what are your earliest memories of playing, and when did you realize this is what you wanted to do in life?
A: My mom was a piano teacher and my dad played in piano bars. Some of my earliest memories were with the piano. I remember climbing inside my mom’s baby grand before I was old enough to start lessons. I was 13 when I kind of woke up one day and realized I had all these musical ideas. That composers were all people and that I was a people and I could be a composer. This is when I really made music mine for the first time. This is when I became obsessed.

Q: When did your interests begin expanding beyond your initial classical training?
A: I’ve always been curious about different approaches to music and what music means to people from different countries, cultures, and generations. I grew up in the San Francisco Bay area and turned 13 in 1980 when West Coast punk rock was in its heyday. When I was 12 my mom remarried and my step-sister worked at Kuumbwa Jazz Club in Santa Cruz. I started heading over there regularly and hearing some of the greatest innovators. I’ve always experimented; there really wasn’t a beginning to that. It’s more like there wasn’t an end, then a new beginning. Life is all about experimenting and playing with the world. We’re born with the instinct to play, the trick is not losing this in the first place.

Q: I read that you "decided to become homeless" for several years after college and "wander and live out of a backpack, rather than pursue a career as a concert pianist." Where all did you wander and what did you do? How did your parents take the news?
A: I didn’t know my dad so well, but my mom was pretty devastated. I quit everything during the build-up to the Persian Gulf War. I didn’t want to circulate money or participate in society, and the idea of making a "career" in music, or anything else, seemed absurd. I lived with a backpack and sleeping bag, sleeping in all kinds of situations, from action centers to federal buildings to on the street. I traveled up and down and around the West. I burned a lot of bridges. In some ways, I wish I could’ve realized then that music was my best way to contribute (not that I have necessarily changed the world with my music either). It’s taken me a long time to figure some things out! But all those experiences are important parts of who I am and the work I’m doing now, both of which I feel good about, ultimately.

Q: Political action seems to be as important to you as musical exploration. When did you start to develop your political inclinations and what events and policies have shaped them over the years? How do music and politics intersect for you?
A: Learning to balance the two has been a constant struggle for me my whole life. I started with animal rights when I was in junior high school and that moved into environmental issues, then anti-war, then police brutality, institutional racism and the injustice system, and so on. Like I said earlier, the Gulf War was a big moment for me. I think we are really fucking things up (or allowing a few to), and it’s unfortunate because it’s so unnecessary. I don’t want to get preachy here, though. Estamos Ensemble and Tsigoti have both been specific outlets for me, at least in terms of expressing something larger than the music itself. And right now my partner, ACVilla, and I are in the middle of a three-year endeavor making audio/video experiences with the United States as a subject. We started it last year during the presidential campaigns, and it’ll culminate with the mid-term elections next year.

Q: Estamos Ensemble's mission is to encourage dialogue and collaboration around the U.S.-Mexico border. What made you take this up, and what has the response been since it started? Do you think most Americans really want a border wall, and what could change their minds?
A: I don’t know what most Americans really want. The border wall is cruel, and the security and private prisons and laws associated with it are Draconian. It’s the ultra-rich elite who are responsible for convincing people that poor people are their enemies. I think as artists we are in a special situation to bring people together and to share our common humanity. I started Estamos Ensemble in 2009, and we just released our third album (Suube Tube).

Q: What was it like to be invited to perform Debussy's works on his own piano and then to actually do it?
A: It was pretty amazing all around. The city of Brive-la-Gaillarde sent me a very official document, signed by all the city council members. It was only the second concert they had had with his piano since it had been found and semi-restored. It wouldn’t have been possible to pack more people into the room where the piano is normally on display. I could really feel the audience. And to play Debussy’s music, as well as my own, on his piano, to hear his music from that same vantage point as when he wrote this music originally -- pretty crazy! The first half of the concert I played pieces he had written on that piano. For the second half, I had invited the great contrabassist Stefano Scodanibbio to join me in structured improvisations I created specifically for us for this occasion. The recordings were released on Die Schachtel, out of Italy, and were the first recordings ever published of Debussy’s piano.

Q: Molecular Affinity, your album with Pauline Oliveros and Nels Cline, came out the month after she died late last year. What led to those sessions and what were they like to take part in? Was there any thought given to this possibly being some of the last music she recorded and released?
A: No, I think most everyone thought she was going to be around for a while. She still had so much energy right up until the end, working on an opera and so many other projects. This was the third trio album Nels and I recorded together, each time with a different third member (William Parker on the first, Michael Wimberly on the second), and we asked Pauline if she’d be into it, and she was. We had a great time before, during, and after the session. Pauline was always a real joy to be around, and Nels and I are good friends. So it was a pretty relaxed time making music together in an old renovated barn in upstate New York. Pauline suggested this studio because Daniel Weintraub, the main engineer, is making a documentary about her. She was working on it with him. Fortunately she was, and now Daniel just has to follow through with what their general plan was.

Q: You've done three albums now with Cline. How did you two come together and what makes him a good recording partner for you?
A: I heard Nels and Thurston Moore play and had an idea for a duo with Nels where he’d play melodies through feedback in response to the harmonics I’d bring out of the piano with these hyper-speed clusters. He was into it. Then I thought to invite William Parker to play as a conduit between us. When we recorded, we used these relationships as leaping off and landing points. For the second album, we were both involved with Analog Outfitters out of Urbana, who repurpose parts from old Hammond organs, and I thought it would be interesting to see what might happen with all this equipment. Nels is a really interesting person to me and an incredible musician who has always been exceptionally curious, diving into many different approaches over the years.

Q: How did the Hand to Man Band come to be and how was jamming with Mike Watt? Were The Minutemen a group you followed as a Bay-area teenager?
A: The Minutemen were playing when I was just coming of age, so they definitely had a big influence on me. Punk is what we make it and “start your own band” are about two of the most influential statements I’ve ever heard. Watt is an incredibly intense person. Definitely one of the smartest people I’ve ever known. A crazy memory for all kinds of subjects throughout time, including who played in what band and seemingly every single gig he’s ever played. He’s a fan of Tsigoti. John Dieterich (of Deerhoof) and I were invited to record at Nicholas Taplin’s studio, which was in Austin at the time. So, I thought to invite Watt and John invited Tim Barnes. We made a second album as well but decided not to release it.

Q: Tsigoti is something very different from your solo and improvised work, and also different for punk rock -- even at its more adventurous -- since you don't often hear acoustic piano in the genre. It makes me think of The Minutemen and maybe The Ex a little. How did the group start and what does this project let you do that your many others don’t?
A: Tsigoti was started on a whim in a musician's house in the hills of Tuscany. I had been at this house for a while and with three days left, me and Andrea Caprara and Matteo Benicci and Jacopo Andreini decided to make a punk album. I had pages of words I had spent a week writing while I was in Prague about the war between Israel and Lebanon, and we turned these into songs. The whole idea was to write songs in the studio, recording them in less than three takes, mix and master before I left. We’re now working on our fifth album. We did a U.S. tour a while back and a bunch of Italian/European tours, including an anti-mafia tour throughout the country in association with anti-mafia groups there. We’ll probably play some shows in Italy next summer.

Q: For this Ann Arbor show, you're playing with a local mainstay in free improv in Piotr Michalowski and also Abby Alwin, the orchestra director for Ann Arbor Public Schools. Have the three of you ever played together before? What can people expect? [Ed. note: They played together for the first time on June 30, 2016, at Kerrytown Concert House.]
A: We’ve all played together in one way or another, though never as a trio. We’ll be playing structured and freely improvised music. It will go in many different directions, exploring all the many different possibilities our instruments are capable of. Solos, duos, trios, extended techniques. I’m sure there will be many very abstract sonic moments as well as modal/melodic playing. Abby and Piotr are both amazing musicians, so it’s going to be amazing. What else is there to say?