Of Jokes and False Starts: The Church's merry psychedelia rocked The Ark 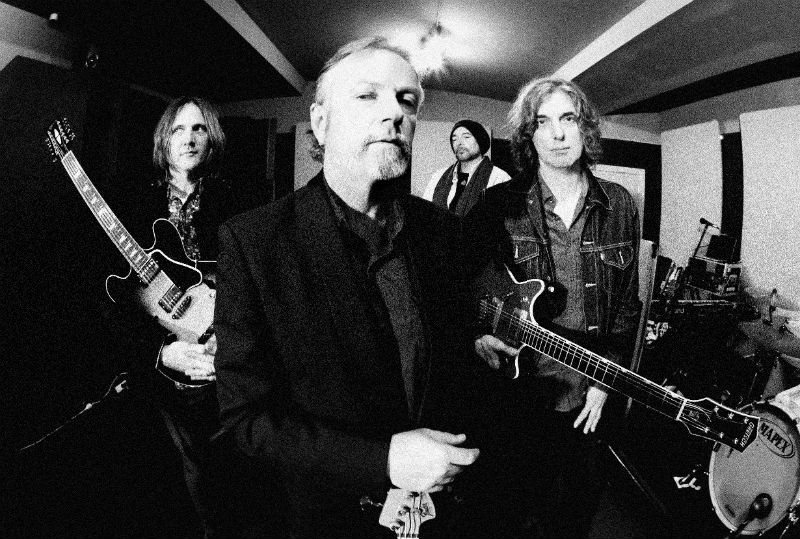 The Church spent a few days in Ann Arbor soaking up the vibes before its show at The Ark.

Before the first encore of The Church’s set at The Ark on Wednesday, June 28, guitarist Peter Koppes joked, “We can use the encore to rehearse for tomorrow's festival.”

Every good jape contains a kernel of truth, and Koppes’ honesty hit the mark. Singer-bassist Steve Kilbey said this was the band’s first show in a year, and The Church spent a lot of the show working out the kinks: adjusting their sound mid-song, dealing with equipment malfunctions, and relearning songs new and old.

Even after hitting stages around the world for 37 years, it's nice to know that the band best known for the 1988 hit "Under the Milky Way" can sometimes still feel like absolute beginners again -- and do so with giant smiles on the muscians' faces.

“North, South, East, and West,” the eighth number in the 16-song set, even began with a false start by Koppes and a sloppy ending. Kilbey joked, “Sorry for my friends in the band for fucking up that song.” Koppes clapped back with something like, “Who said we’re your friends?” Kilbey returned fire with, “Who was drinking all that absinthe and smoking all those joints?” And Koppes concluded the Abbott and Costello bit with, “I resemble that remark.”

The band’s looseness about being rusty translated into a joyful 80-minute concert that featured several laugh-out-loud one-liners for Kilbey and Koppes. The less-than-formal feel of the concert might have come from the fact that the band spent a few days in Ann Arbor practicing its set at Johnny’s SpeakEasy, the west side basement venue known for its intimate acoustic shows. The Ark’s stage felt like an extension of the SpeakEasy, with The Church’s five musicians looking relaxed and enjoying themselves even if every note wasn’t perfect.

The Church began its set with the brooding “Aura” (Priest=Aura, 1992) and worked through “Myrrh” (the lead track on Heyday, 1985) before blasting a massive version of “Toy Head” (from the band’s most recent LP, Further/Deeper, 2014). It’s likely the loudest The Ark’s been in years -- at least until later in The Church’s set. 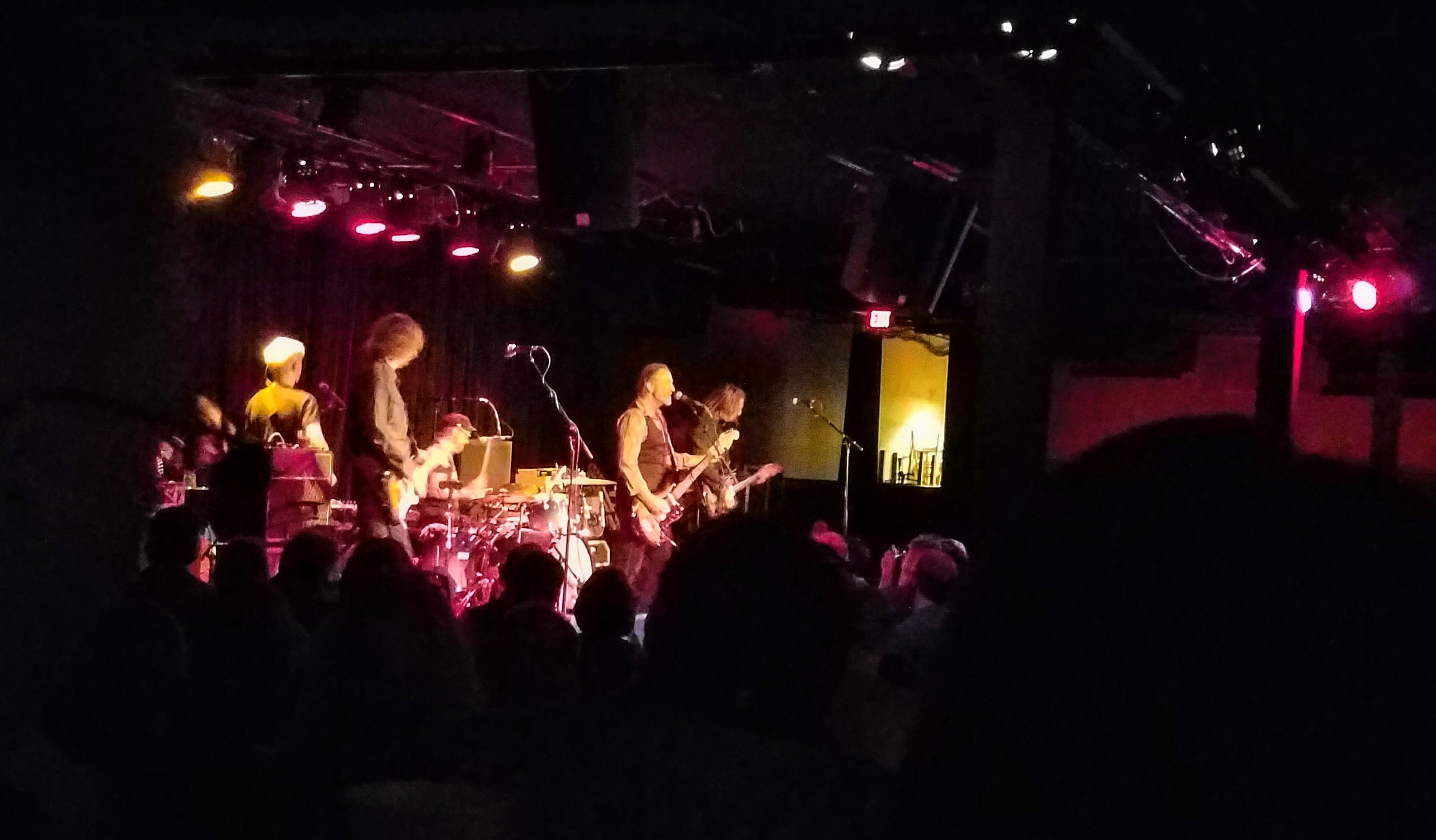 The Church played some great songs between the funny japes. Photo by Christopher Porter

One of The Church’s finest songs, “Metropolis” (Gold Afternoon Fix, 1990) struggled with slightly out of tune backing vocals, an odd lead guitar sound, and a beat that felt jaunty and off-kilter compared to the song’s straightforward recorded version. The brand new “Another Century” was followed by “Delirious” (Further/Deeper, 2014) and one of Kilbey and Koppes’ comedy routines. As Kilbey turned to his left and asked for a towel, Koppes walked up behind him and held one right next to the singer’s unaware head for what felt like a minute. Once Kilbey noticed it, he grabbed the towel, wiped his face, and offered to sell it for $1,000: “You could have twins if you wiped yourself with that towel.”

The Church reached way back for “Fly” (Seance, 1983) and a ragged “North, South, East, and West” (Starfish, 1988), then caught its stride again on “Day 5” (Uninvited, Like the Clouds, 2006), which featured Koppes imitating a sitar during his solo by running his acoustic guitar through a pitch shifter.

Another new song, “I Don’t Know,” began with Kilbey reciting the chords for the song -- “A minor, G, D, all diminished or augmented” -- but ended prematurely when the bassist messed up the tune’s 6/4 rhythm. Drummer Tim Powles told Kilbey it was no big deal to screw up: “Neil Finn does it every fuckin’ night.” (Duck! Shrapnel in a Crowded House!)

The Church nailed the next song, “Tantalized” (Heyday, 1985), even besting the volume of “Toy Head.” It was the finest moment in the set and the group was in sync right down to Kilbey’s paisley shirt, which evoked the garb he wore in the song’s video. “Under the Milky Way” was next and the crowd cheered from its opening notes. Kilbey put his hand to his forehead and feigned falling backward at the start as if to say, “Oh, no, this one again!” When the song ended, Kilbey joked, “That’s a cover version, you know” before breaking into a stand-up routine: “We’re gonna miss Zingerman’s Restaurant. The black bean burger was pretty good ... because I don’t eat fucking meat.” (At some point he also made a joke about Noah playing The Ark.)

“Reptile” (Starfish, 1988) closed the set, but the band quickly came back for an encore with “Miami” (Further/Deeper, 2014). Koppes had fun mugging for friends in the front row, as he did throughout the set, with his rubbery funnyman face evoking that of Stan Laurel. (Seriously, get these guys a sitcom, stat.)

The second encore began with some banter about Iggy Pop and guitarist Ian Haug broke out a Stooges riff (“T.V. Eye”?) before The Church finished the show with “Unguarded Moment” (Of Skins and Heart, 1981) and “Space Saviour” (Untitled #23, 2009), turning the latter song on its ear. The recorded version of “Space Saviour” is a droney ballad, but The Church pretty much turned it into a Stooges-type garage-rock raver, with Kilbey turning his bass duties over to the roadie so the singer could prowl the stage with just the mic and go full-on showman.

It was a perfectly playful way to send the appreciative crowd out the door and under the Milky Way.

Christopher Porter is a library technician and editor of Pulp.

Read our preview of The Church concert at The Ark and listen to a 22-song playlist here.