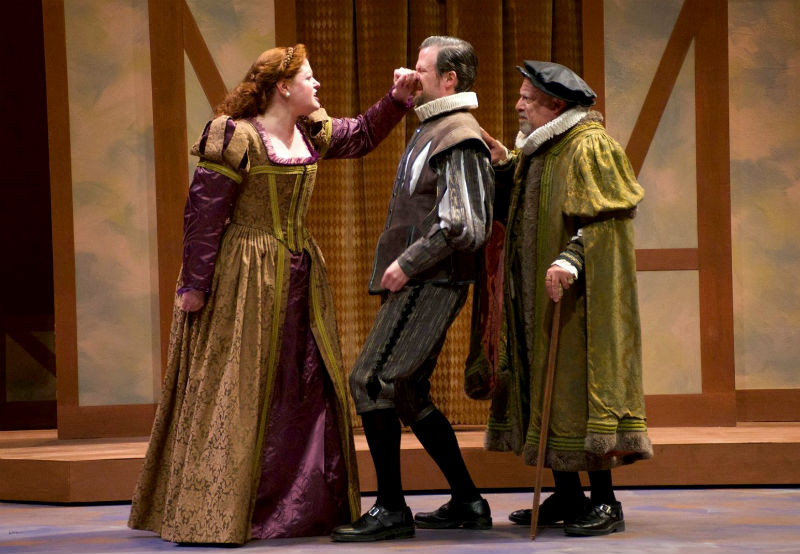 Michigan Shakespeare Festival's The Taming of the Shrew deals with the play's misogny without major script changes.

The Michigan Shakespeare Festival’s board votes on the plays for a specific season -- pitched by MSF’s Producing Artistic Director Janice L. Blixt -- 18 months in advance of the curtain being raised.

So in early 2016, when MSF’s board voted to approve Taming of the Shrew, Julius Caesar, and Chekhov’s The Seagull for 2017 (the season kicks off in Jackson on July 6), the company had no idea that it would be staging Caesar shortly after New York Public Theater’s production of the play (which depicted Caesar as Donald Trump) made national headlines and drew protestors.

“I expected Shrew to be the controversial show, where I’d be fielding questions like, ‘How are you dealing with the misogyny?’” said Blixt.

Not so much. Although Blixt, who is directing Caesar, had her own vision for the play -- a take that bears no resemblance to the Public’s political lightning rod production -- MSF has received phone calls, emails, and Facebook comments from across the country recently.

“We’re getting it from both sides,” said Blixt. “Some people are angry that we’re doing the show at all. Others are angry that we’re not giving it a more political bent. Both of our venues (in Jackson and Canton) have gotten a lot of calls about it. Enough so that I finally had to issue a statement.”

Blixt has largely built her production around this key passage from Caesar’s Act III, scene I: “How many ages hence/ Shall this our lofty scene be acted over/ In states unborn and accents yet unknown!”

“(These characters) talk a lot in the show about the situation they’re in in Rome,” said Blixt. “They feel like they’re losing their Republic to the power of one individual, so they feel like they have to do something. Historically, this is the basis for nearly every government overthrow, be it a military coup, or an assassination, or some other kind of turnover of power. It happens again and again and again.”

Blixt’s production features a set that combines traditional columns with modern graphics, and Roman Senate togas appear alongside more contemporary looks. According to Blixt, this works to underline the fact that “Rome has stood this entire time, and the traditions and rituals of ancient Rome are often still what are used today.”

Due to the controvery in New York City, Michigan Shakespeare Festival issued a statement about its version of Julius Caesar.

The production’s primary focus, though, is drawn from the text itself: how Brutus must weigh his own feelings against the needs of the state, and what comes of his decision. “We see how far he has to be pushed to see that Rome is more important to him -- the traditions and rituals of Rome -- than even his friend, a man he cares about a great deal. But Brutus is terrified that Caesar’s changing the republic, so he and the other conspirators choose to use violence, which inevitably means the whole thing will end in violence. That’s just how it works in Shakespeare. It tends to be true that the first guy to draw a sword ends up dead.”

Blixt takes several factors into account when putting together a season proposal, but two broad-stroke starting points involve pairing of a Shakespeare comedy with a tragedy or history, and an oft-produced work of the Bard’s with a lesser-known one. Caesar was intended to fill the latter slot, which Blixt acknowledges seems strange, given that it’s pretty famous. “But we’d checked in with our patrons, and we were surprised to find that an incredibly big number of them had never seen it,” said Blixt. “They’d read it in high school, but they’d never seen a production of it.”

The Taming of the Shrew, filling the “more familiar Shakespeare show” slot this season, will not only surely be a lighter, sillier night of theater than Caesar, but it will also feel celebratory, as it marks the 20th anniversary of a special production that brought three key MSF figures together.

Back in 1997, when the fledgling company was called the Jackson Shakespeare Festival, artistic director John Neville-Andrews cast Blixt (née Waldron) as Kate and David Blixt as Petruchio. The two young actors had never met before, and not only did they go on to co-star in subsequent MSF productions helmed by Neville-Andrews (Much Ado About Nothing, A Midsummer Night’s Dream, Macbeth), but they also got married, and they honeymooned in Petruchio’s hometown of Verona. (Neville-Andrews stepped down as MSF artistic director in 2009 and Janice Blixt stepped in.)

This trio of artists that helped establish, and build on, MSF’s foundation are reuniting this year for a brand new (yet more Elizabethan) production of Shrew, with Neville-Andrews back in the director’s chair. The comedy tells the story of a Paduan lord whose beautiful youngest daughter, Bianca, earns the attention of many suitors, but her father won’t allow her to marry until her older sister -- headstrong, willful Kate -- finds a husband. When Petruchio comes to town, looking to marry a woman of means, his friend, Bianca-smitten Hortensio, convinces him to marry Kate. After the wedding, Petruchio goes about “taming” Kate by way of denying her food and clothing (claiming nothing’s good enough for her), and reflexively disagreeing with everything she says.

Obviously, Petruchio’s treatment of Kate often makes Shrew disturbing for modern audiences. “But I think audiences will be pleasantly surprised,” said Blixt. “Without major script changes, we are creating something a little different. The heart of this relationship is -- they’re going to end up happy together, and it’s not about Stockholm Syndrome, or starving her until she listens. It’s about learning to play the game, where a partnership is a partnership. You, scowling angry woman, you don’t get to be leader, just as I, goofy ebullient man, can’t be the leader. We will not have happiness until we’re truly partners.”

Not that there haven’t still been challenges along the way. “As a 40-year-old woman, I hear these words come out of my mouth, and I think, ‘I don’t like this. I need to figure this out,’” said Blixt. “But we all knew the product we wanted to make, so it’s a matter of how we use what’s there to get to that product. And I think we’ve done it.”

Twenty years ago, the couple approached Kate and Petruchio as two people who fell in love at first sight, but -- because of where they were both coming from -- they couldn’t communicate it or acknowledge it until going through one hell-week of marriage. But that’s not the only difference.

“Last time around, I didn’t have to take a hot shower and an ibuprofen after every rehearsal,” said Blixt, referring to her role’s physical demands. “I mean, we’re trained as classical actors, so before, I’d always do things like warm-ups because it was the right thing to do, but now, if I don’t, I’ll really be hurting for a few days.”

Finally, MSF will present a new adaptation (by Blixt and the company) of Anton Chekhov’s classic dark comedy The Seagull, about an aging actress, her famous author boyfriend, her pretentious aspiring playwright son, and an ingenue who’s both a threat to her and a painful reminder of what she’s lost.

“I was looking for something that was going to be funny, but I didn’t want anything that’s ‘silly funny,’ since Shrew would have that covered,” said Blixt. "Even when (The Seagull) gets painful toward the end, the humor is dark and biting. It’s more like a modern sitcom, like The Office, than something that’s lighter and sillier. And it’s got great characters and terrific roles for women.”

Blixt is directing The Seagull (as well as Caesar), and she’s excited by what she’s seen thus far in rehearsal.

“I hope audiences walk in and can slough off the idea that they’re in for three hours of Russian angst, which is what most people think of when it comes to Chekhov,” said Blixt, who says the company’s new version clocks in at closer to two hours.

And because it combines tragedy with comedy, The Seagull seems to round out MSF’s new season nicely. “We’re doing a bit of a mix of shows, and trying to look at each one a little differently,” said Blixt. “We’re definitely going for a ‘something for everyone’ mentality.”