Ann Arbor in Concert’s "Spring Awakening" was lovely and heartbreaking 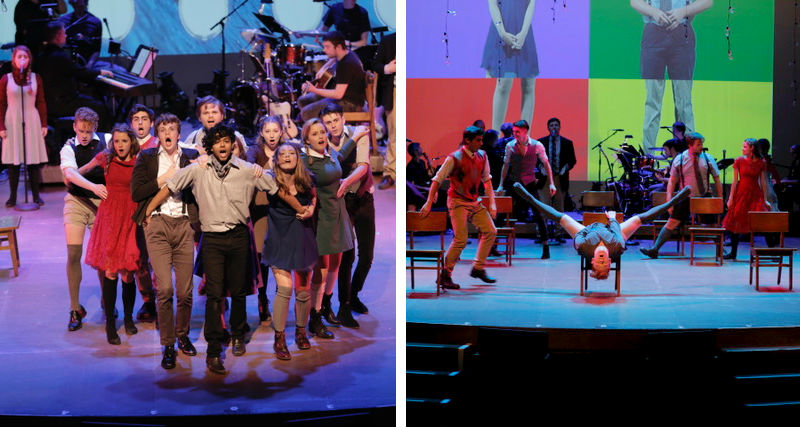 For a few moments during Ann Arbor in Concert’s production of Spring Awakening on Saturday night at the Power Center, all the heightened hormonal chaos, longing, joy, freedom, and frustration of adolescence was on resplendent display.

The number, which I’ll politely refer to “Totally F-ed,” arrives late in the Tony-winning stage musical, and in the words of Rohit Gopal (who played Moritz) during the talkback, “It’s a banger.” The entire cast embodies revolt through song, and at one point Christopher Campbell’s deft choreography clearly dictates that each performer “rock out on your own as the spirit moves you.”

And boy, does the overall effect work.

Which is good, because although A2iC’s Spring Awakening didn’t hold back at all in some ways -- the graphic adolescent sex scene between intellectually sophisticated, handsome Melchior (Ben Walker) and curious, stifled Wendla (Natalie Duncan) that ends the first act and opens the second included partial nudity, just as the original Broadway production did -- it generally felt a bit muted, emotionally and vocally, throughout the evening.

Inspired by Frank Wedekind’s controversial 1891 play Spring Awakening, the Tony Award-winning 2006 musical adaptation -- with a book and lyrics by Steven Sater, and music by Duncan Sheik -- focuses on a group of 19th-century German teenagers who are dealing with sexual and physical abuse, homelessness, suicide, illegal abortion, depression, and homosexuality, all while living within a repressive society that refuses to acknowledge, let alone talk about, their issues.

A2iC, meanwhile, is a town-and-gown theater company -- notably heavy on the “gown” end this year, given that Spring’s focus is young people -- that has presented, in its four previous years, one big, splashy staged concert of a musical, with scores of musicians, singers, and performers from the community worked into the mix. These concerts have generally featured lighter-fare shows like Hairspray and 42nd St., and this year, A2iC founders Mike Mosallam and Eric Lofstrom originally planned to produce the Meredith Willson classic The Music Man. However, the intense political climate inspired Mosallam and Lofstrom to not only take on something darker but something smaller and more intimate -- and thus more like a full production, involving just 15 actors and 8 musicians.

Largely thanks to U-M’s top-ranked musical theater program, Mosallam (who directed Spring) managed to draft some pretty impressive talent for the show. Duncan, a U-M senior, conveyed the right mix of yearning and vulnerability, alongside strong vocals; Gopal and Matthew Kemp (as unabashedly “out” Hanschen) -- a U-M senior and junior, respectively -- both dug deep for their roles and didn’t shy away from their toughest moments; and Walker, a U-M senior, was the production’s beating heart. With emotionally clear, resonant vocals that matched his depiction of Melchior as an unheard, rational voice of reason, Walker pulled the whole show together.

Bringing various ancillary adult characters to life, meanwhile, fell to Eva Rosenwald and John Seibert, who gleefully reveled in tossing German names back and forth, but also had the tough job of humanizing sometimes-cruel characters. Indeed, it’s a tremendous credit to Seibert that when he resumes his brief role as Moritz’s abusive father, who’s presiding over his son’s funeral, and finally breaks down, I did, too.

Some of Mosallam’s staging choices worked better than others. A new approach to the show’s coda, “The Song of Purple Summer,” involving a small pool where pairs of characters anointed each other as a kind of rebirth, was quietly lovely and moving in its awkward way; and Andrew Howell’s multimedia contributions, and John McCarthy’s video backdrop work, were quite well done.

Yet the choice to film a scene in which Moritz’s father strikes his son over his poor performance in school, as the actors stand on stage and watch in darkness, felt odd and a bit jarring, particularly when a show’s raison d’être is to make us face and talk about things that make us uncomfortable. And vocally, Spring’s original Broadway production had all the characters using individual microphones, in part to visually contrast past and present eras, but also so that the unleashed punk quality of the score screamed through. While handheld microphones aren’t themselves the issue, the attitude, intensity, and feel they seemed to achieve are; and some of A2iC’s Spring numbers -- like “The Dark I Know Well,” wherein two girls trapped by incest give voice to their pain and rage -- simply lost some of their edgy, hard punch in translation.

Drew Hill designed the costumes (and hair and makeup) that gently suggested the era without being too fussy, and Noemi Ybarra designed the show’s atmospheric lighting.

All these elements combined to make A2iC’s Spring a lovely, heartbreaking night of theater, despite the aforementioned minor bumps. The show became a hit for a reason: if you’re in the midst of adolescence, with all of its trials and flashes of beauty, you’ll see your life writ large on-stage, while if you’re an adult, songs like “Touch Me” will time-travel you back to your own teen years, when you thought you might actually die with longing.

Plus, Mosallam’s fresh take on the show’s end worked like a balm, particularly in a political climate that’s caused many of us to feel both more fragile and more hardened simultaneously. It was surprisingly healing to watch a small gesture of forgiveness between characters -- to such a degree that when I arrived home, and Melchior’s philosophical anthem “All That’s Known” began playing on my phone, I took a moment to stand in the wet grass of my front yard, listen to the lyrics, and stare at the dark sky and stars above me.

To learn more about the play and this production, read our preview article: "Serious sentiments in "Spring Awakening" flip the script for A2 in Concert."