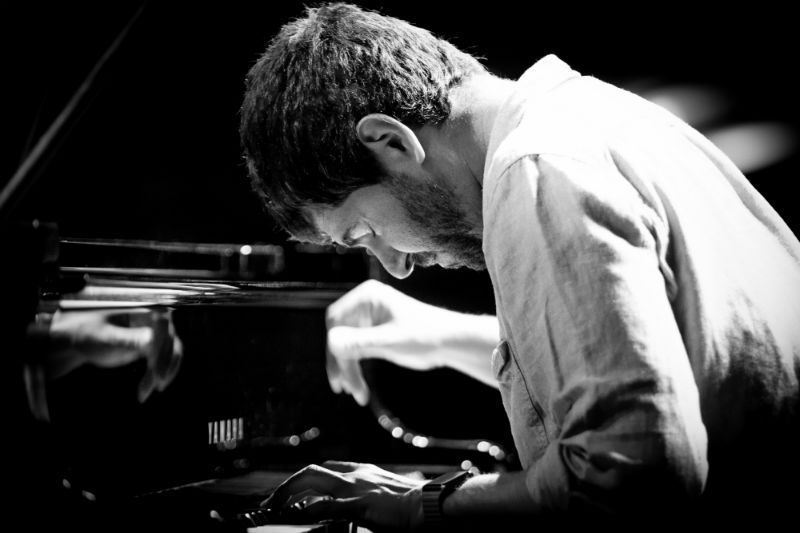 As he introduced each piece during his July 16 performance at Kerrytown Concert House, André Mehmari tended to position himself between the small audience and the jet black bulk of the concert piano behind him on stage. Standing in a manner that was at once relaxed and poised, the 40-year-old Brazilian pianist and composer would sometimes lightly rest a hand on the edge of the instrument’s body as he spoke, engaging with his audience in a manner befitting the intimate space of the venue.

“I think that it’s very important to play this music, to tell the story of Brazilian music,” he explained. Mehmari -- who appeared at Kerrytown Concert House nearly a year prior -- brought with him an exciting collection of repertoire, music infused with influences of jazz, ragtime, classical, and all manner of Brazilian and Latin American music.

The concert opened with “Tenebroso,” a work by the late-19th and early-20th-century Brazilian composer Ernesto Nazareth, a musician respected for what he termed “Brazilian tango.” The piece, a mostly jaunty work with contrasting, expressive minor-key B section material, began with a bass-register line that (particularly when played in the manner Mehmari played it) puts one in mind of the brooding opening of Stravinsky’s famed 1910 ballet The Firebird. From those first notes audience members were transported to another world, and for the next hour-and-a-half or so, Mehmari held his listeners rapt with bursts of dazzling virtuosity and moments of sweeping expression.

Just as he appeared relaxed when speaking to his audience, Mehmari looked completely at ease in front of the keyboard. If anything, the act of playing augmented his apparent quietude, a hallmark of a natural performer. His limbs, loose and unconstrained, would move up and down the keyboard as he poured out shimmering pyrotechnic displays, and in some of the more expressive moments his body would sway gently back and forth. Once in awhile, during a split-second pause in a fast and vigorous section of music, he would give a single stomp of his foot, infusing the music with new energy before he plunged onward. Whether this was deliberate or involuntary wasn’t entirely clear, but that’s inconsequential -- either way, it was little touches like that (in addition to Mehmari’s obviously superb pianistic ability) that made the concert so compelling.

Throughout the remainder of the evening, Mehmari adroitly performed works by Gismonti, Amélia, Gnattali, Pixinguinha, more Nazareth, and his own compositions. But interspersed throughout these, the pianist provided a taste of his formidable improvisational abilities. Taking requests from the audience as to the material he should use, Mehmari played three different spontaneous compositions throughout the concert. “It allows me to play the music of the moment,” he remarked.

The first of the improvisations must have contained somewhere around a dozen different musical fragments lifted from a smattering of genres -- Chopin’s Prelude in D-Flat, a couple of Joplin rags (including the ubiquitous “Maple Leaf”), “Take the 'A' Train,” Debussy’s “Clair de lune” (which elicited slight laughter from the audience), Chopin’s famous Nocturne Op. 9 No. 2, “The Girl From Ipanema,” Schubert’s “Der Leiermann,” and others -- and yet Mehmari managed to bring all of the disparate threads together to form a new piece that was not only coherent but outright beautiful, a work that would be impressive even if it wasn't composed in the moment of its performance.

The remaining improvisations were no less impressive, and as the audience warmed to the idea of participating (however slightly) in the creative process, they began to offer more suggestions. Many in the audience appeared to be quite familiar with Brazilian musical history, and several asked for themes from composers who are little known in the United States (though The Beatles managed to make an appearance as well).

Approximately midway through the performance, an unexpected guest appearance was made. As Mehmari introduced his composition “Lagoa da Conceição,” he remarked, “(For this piece) I’m going to need some help.” As Mehmari beckoned him, teenager Ben Chamis made his way from the audience up to the stage. As Mehmari explained, he became friends with the Chamis family while they were living in Brazil several years ago, and when Mehmari later visited the family in Pittsburgh, Ben asked Mehmari to teach him the piece. Ben remains, in Mehmari’s words, “my favorite interpreter of the piece.” The pair then proceeded to play the composition, an act which can be seen in a previous iteration on YouTube, in a video taken several years ago when Ben was a mere nine years old.

At the end of the evening, after Mehmari had finished all of his improvisations and all of his prepared pieces, the audience left gratified, giving the pianist a hearty round of applause. Mehmari left having told the story of Brazilian music, and having brought Ann Arbor a variety of music that is less known in the United States than it should be, a type of American music not widely understood as such. But even if only a little bit, Mehmari helped to change that perception, bringing the music of America -- all of America, North, South, Central -- closer together. As he remarked, “We’re all Americans, because America is a huge thing.” And American music is so much more than sometimes we realize.

Dayton Hare is the summer managing editor of The Michigan Daily and is working on his BM in music composition and BA in honors English.

Read our interview with the pianist: "Piano Panorama: André Mehmari returns to Kerrytown."