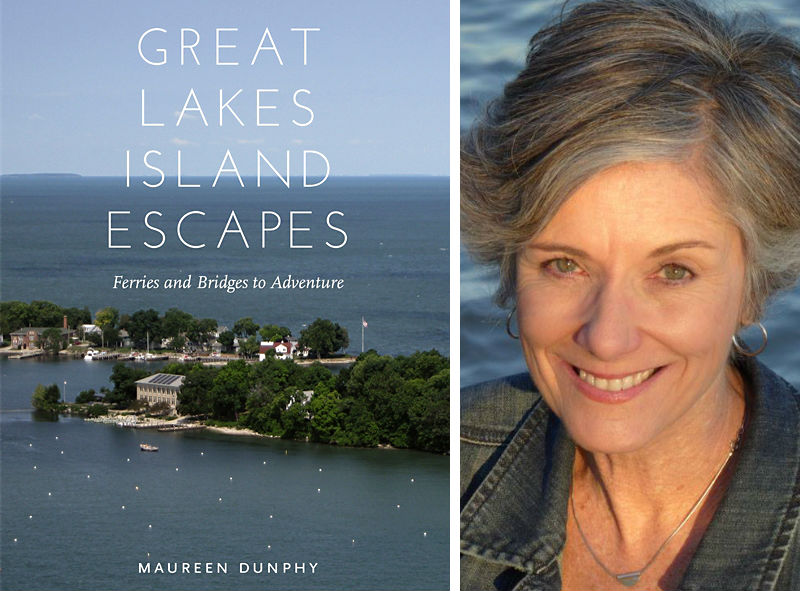 In grade school, we learn the mnemonic HOMES to remember their names. We know they are the largest freshwater system on the planet. And those of us lucky to live near them get to enjoy recreation opportunities year-round.

But did you know that over 30,000 islands can be found in the five beautiful Great Lakes?

Maureen Dunphy’s new book, Great Lakes Island Escapes: Ferries and Bridges to Adventure takes us on an amazing journey to more than 100 of these slivers of land.

Over two summers, Dunphy visited islands in the Great Lakes basin that are accessible by a ferry or a bridge. She says, “I only visited islands between Memorial Day (or Victoria Day for the Canadian islands) and Labor Day. Some islands shut down after Labor Day, weather can change … so I made sure I was comparing islands fairly.” During those seasons in 2013 and 2014, Dunphy made 27 trips to 136 islands.

Dunphy then spent 2015 writing Great Lakes Island Escapes, using pictures, journals and the copious notes she had taken during her visits. “There are 11 bodies of water in the basin -- the five lakes, five rivers, and the Straits of Mackinac. I used those bodies of water for sections in the book and then it is broken down further into one or two featured islands. Each island chapter is then in sections -- what natural sights are on the island, the history that is preserved there, cultural attractions, special island events, how people can support the island and where they can learn more about the island.”

It is not an exaggeration to call this book epic; each chapter begins and ends with quotes from the journals that Dunphy kept. There are 24 island maps in the book to show visitors where they can hike and bike ride as well as highlighting the topography of each island. The pictures, bountiful and beautiful, are liberally scattered in the book -- and many of them are from Dunphy’s own camera. She laughs, “I took thousands of pictures so I could document everything and jog my memory as I was writing. I just had a little personal camera (and we ended up using) about 115 of them in the book!”

Dunphy found that there were not a lot of recent maps of the islands and found herself consulting a 1953 map from National Geographic. She took ten days and visited as many islands as she could, including Belle Isle, Boblo, Grosse Ile, Beaver Island, and Johnson Island and then wrote a book proposal which was accepted by Wayne State University Press. “They have the best regional studies department on the Great Lakes and they were my number one choice for a publisher,” she shares.

One of Dunphy’s earliest decisions was to take along a friend or relative on each trip. “The sample chapter I submitted was about Grosse Ile and I took a friend who grew up there. I quickly found that this made it much easier to talk to locals -- we could tag team with questions and when we were done we could talk it over. It also allowed me to see the island through someone else’s eyes.”

After that, Dunphy says she “got the idea of inviting 24 of my best friends from all stages of my life -- grade school, high school, grad school, work colleagues; 19 of them accepted and I let them pick what island they wanted to go to and what we should do once we got there.”

Throughout her career, Dunphy has taught, edited, and wrote fiction. She currently runs her own consulting business and is hard at work on another project and laughs, “I’m a fiction writer, but I keep getting pulled back into nonfiction!”

Check out this 2017 Michigan Notable Book and learn more than you ever thought possible about the stunning natural wonders that surround our beautiful state.

Maureen Dunphy will be at the Pittsfield library branch on Wednesday, July 26, from 7-8:30 pm where she will discuss and sign "Great Lakes Island Escapes: Ferries and Bridges to Adventure."