However it’s made, Ellipsis Theatre's "Sausage" is good fun 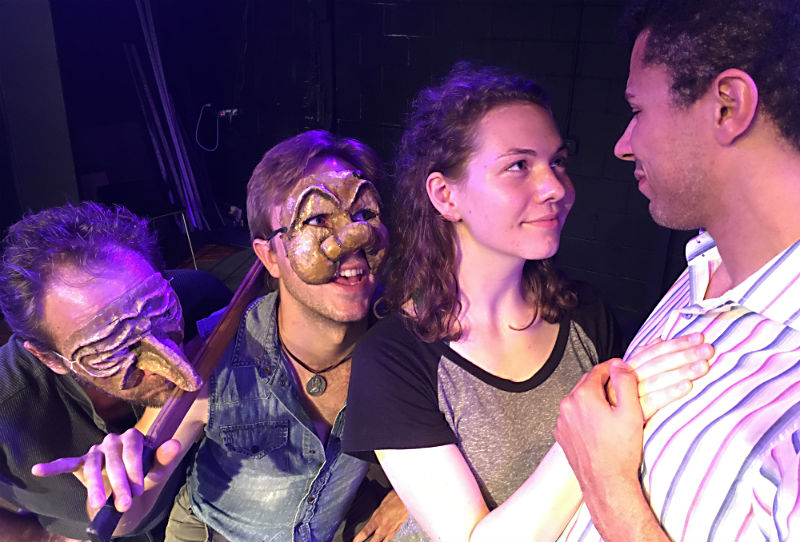 Masked men and women: The School for Sausage is a commedia dell’arte filled with high-energy humor.

The raucous atmosphere of The School for Sausage is evident even before the play starts -- one of the characters plays ukulele in the middle of the stage, other characters prance about to warm up, and the director tells you that because this is commedia dell’arte and you will never see this exact play ever again.

Considered the first form of professional theater, commedia dell’arte combines improvised dialogue and scripted scenarios. No one knows the exact date the art form began, but origins can be traced back to the Roman Empire. As early as 1551, performances were documented and we know they were performed outside by masked, professional actors, and unlike in other types of theater at the time, females played female characters. There are four character groups in commedia dell’arte, each with their own unique costumes and masks: servants, old men, lovers, and captains.

Joanna Hastings, co-playwright and co-founder of the Ellipsis Theatre, says she and theater partner Scott Screws “used to do the annual original commedia dell'arte show in the parking lot of Downtown Home and Garden every summer. It was outdoor, vibrant, crazy comedy and we loved it. When we started producing theatre together again last year after a hiatus of nearly a decade we decided to revive the tradition. It fits perfectly with the spirit of mission, which is to explore the telling of new stories in old ways and old stories in new ways. Plus, it is an irreverent art form by tradition, and there is plenty to be irreverent about these days.”

This irreverence and fun were on display at the opening night performance on July 27. The play opens with The Dottore (Justin Cohen) as he concocts a chastity potion. Fed up with “kids these days” and their potential to waste their lives, The Dottore wants to “cure youth of today of their libidos” and just needs one vital ingredient to complete his potion, so he sends his servant, Arlecchino (Forrest Hejkal) to the market. The show follows Arlecchino to the market where we meet Lelio (Jahmeel Powers) and his pal Horatio (Snow Woodcock), both of whom are planning an adventure involving wine and women. Before they can get too far, however, they meet Columbina (Breon Canady) and Isabella (Mariah Colby). Lelio and Isabella fall in love at first sight, and we have a romance brewing right in front of our eyes.

Meantime Isabella’s father, Pantalone (Scott Screws), ruminates over his waning fortunes -- partially caused by his daughter’s overspending. To turn his financial situation around, Pantalone decides his daughter must be married off to his old friend, The Dottore. The play then revolves around Isabella and Lelio trying to prevent that wedding along with plenty of other hijinks: inn owner Babette (Hastings) just wants to get paid for those 20-year-old bar tabs, The Dottore wants to complete his potion, Pantalone wants Columbina to watch over his daughter, Columbina wants a fair wage for a day’s work, and Arlecchino just wants a bite to eat.

Act II features the school set up by The Dottore, Pantalone and Babette to teach abstinence. None of them are exactly up to the task of teaching, but at least they are funny about it. The hilarity includes a “chore off” to determine who worked the hardest (washing half a window versus doing three pieces of laundry), the unscrupulous Pantalone tricking the students into signing themselves into student loans, and discussions about how to best escape that debt: Drowning? Jumping off of a mountain? Chaining yourself to a desk while you watch your dreams die? From there we see what happens when that chastity potion is drunk and how to do a paternity test when all you have are flasks of urine and your taste buds.

The masks worn by most of the characters added to the fun atmosphere (commedia dell’arte sets forth which characters wear them and which don’t). Hastings says, “The masks were all made by Forrest Hejkal (Arlecchino), who has recently joined Scott and myself as an official partner in Ellipsis Theatre Company. They were live-cast from the actors' faces and made to evoke traditional commedia designs for the stock characters.”

Hastings says the show contains lots of mild sexual jokes and so parental guidance is encouraged, but “the physical, high energy nature of the humor is a great fit for all ages.”

Come on out and see passionate death scenes, an attempt to capture a fly, and a sly throw back joke about the blue/black or white/yellow dress that plagued the internet. But maybe you won’t because, as the man said, you won’t see the same show twice.

Ellipses Theatre's "The School for Sausage" will be performed at The Yellow Barn, 416 W. Huron St., on Thursdays-Saturdays at 8 pm and Sundays at 2 pm through August 12. Click here for tickets.