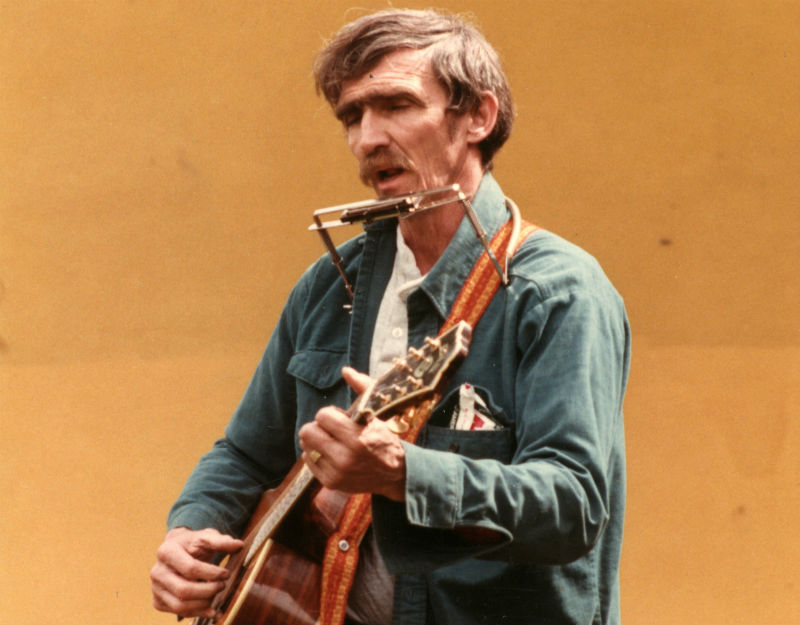 Jay Stielstra in 1984 at the Interfaith Council for Peace and Justice sendoff party at West Park following the Peace Parade. Photo via oldnews.aadl.org.

Jay Stielstra will be receiving a Michigan legislative tribute at The Ark on Tuesday, August 15. Many Michigan music fans will agree the award is well deserved and long overdue. Few musicians command more respect and affection than Stielstra, 83, who has been writing and singing about his beloved Michigan for nearly five decades.

State Senator Rebekkah Warren will present the award, which honors Stielstra’s lifetime of artistic contributions to the State of Michigan, and former State Senator Lana Pollack will introduce Senator Warren and will also make brief remarks. After Stielstra is presented the award, the music will begin. A large group of musicians will be on hand to help celebrate Stielstra by performing and/or accompanying his songs, which shouldn't take too much practice: His songs are a part of the repertoire of many musicians throughout the state.

“This concert evolved from an idea that was the brainchild of Mary Sexton, a local conservationist and longtime fan of Jay's music,” says organizer Judy Banker. “Mary came up with the idea of petitioning for a Michigan Legislative Tribute to honor Jay for his artistic and other contributions to our great state and reached out to Senator Warren and former Senator Pollack to formalize the plan."

"A Michigan Tribute to Jay Stielstra" will also benefit The Ark, the place where Jay began his musical career back when the venue was on Hill Street.

"I knew there were many artists and other people Jay has worked closely with who would like to share in honoring Jay," Banker says, "and I know that Jay enjoys hearing other artists perform his songs more than he likes singing them, so it very quickly evolved into a plan to have Jay's artist friends perform his music for an evening of celebration."

Banker has known Stielstra for over 30 years and has been performing with him for the last nine. “I met Jay back in the mid-1980s through my late husband, John Sayler, who was good friends with him," she says. "John and I played with Jay in the Jay Stielstra Trio from 2009 until John's death in 2012. It was difficult, but Jay and I found a way to continue playing after losing John by inviting different musician friends to sit in with us at gigs. Dave Roof began playing with us regularly on upright bass and over time we've been joined by an array of wonderful musicians.”

Stielstra is a prolific songwriter who estimates he’s written over 150 songs. His lyrics cover many different topics, but it’s his love of nature -- and the wilds of Michigan’s Upper Peninsula -- in particular, that inspires many of his lyrics, even in his love songs. In “Two Rivers” he sings, “I love two rivers and only one woman / They mean more than life to me / I’ll never tell you the name of the woman / The rivers are the Fox and the Manistee.”

He’s written beautiful, lyrical descriptions of the northern landscapes -- “I’m going home to the golden meadows, hawkweed orange and hawkweed yellow / I’m going home where the white birch stand in the jackpine hills of northern Michigan” -- and also hilarious observations about some of Mother Nature’s less glorious aspects. “Now I hate mosquitoes, black flies are even worse / The flies of Lake Superior are the very devil’s curse.”

Though Stielstra’s songs stand perfectly well on their own, they often fit smoothly into larger narratives. Over the years he’s combined many of them into musicals, among them North Country Opera, Tittabawassee Jane, and Old Man in Love, that have received warm receptions in theaters throughout the state.

A number of the artists honoring Stielstra at this lifetime achievement event have also had roles in Stielstra’s plays, says Banker, “so we'll be recreating some vignettes from the plays as well. In particular, North Country Opera and North Country Opera Continued, using many of the original cast members. Ron Miller, who directed Jay's plays, has generously offered to direct these vignettes.”

I asked Stielstra about his long life in music and how he got started. In his typical taciturn, humble, and self-effacing way he wrote, “Back in the 1960s we had two little daughters and I bought a guitar for $20 and learned to strum it so we could sing a few songs together. The oldest is now 62 and will be here on August 15! I have been so flattered to have these truly great musicians willing to play with me. It will be such a pleasure to hear them because they do the songs much better than I ever have. I'm just going to sit back and enjoy it.”

Stielstra has recorded three CDs of his music over the years and has just finished his fourth, Heaven for Me and this evening will also serve as a record release party. Banker says the recording features “popular songs of his, songs that he has performed for years but never got around to recording.” Multi-instrumentalist Jason Dennie, harmonica wizard Peter Madcat Ruth, fiddler Mary Seelhorst, bassist Dave Roof, and Banker accompany Stielstra on the recording.

“I am so gratified to be able to be part of this event and to have had the opportunity to play music with Jay for these last nine years,” says Banker. “Jay and Barbara are close friends of mine. And Jay's music feels like an old friend. Nothing compares to performing with Jay when he breaks out his state anthem, "I'm Singin'," and you feel the room fill up with everyone's voices joining in. I look forward to many more years of performing with Jay, and I'm glad for this opportunity to celebrate the music and art he has created out of his love for friends, family, and our beautiful state.”

I’m singing, I’m singing 'bout this old State of mine
Closest thing to heaven that I will ever find
Her Great Lakes and her rivers are flowing sweet as wine
And an old empty beer can buy a man a dime

I fished her icy rivers with every kind of fly
Shot straight at a partridge though most refuse to die
I skied her silent forests, seen chickadees at play
And hunted magic mushrooms some secret place in May

Now I hate mosquitoes, black flies are even worse
The flies of Lake Superior are the very devil’s curse
But when you take the bitter and mix it with the sweet
Down it goes with a can of Stroh’s, oh lord, it can’t be beat