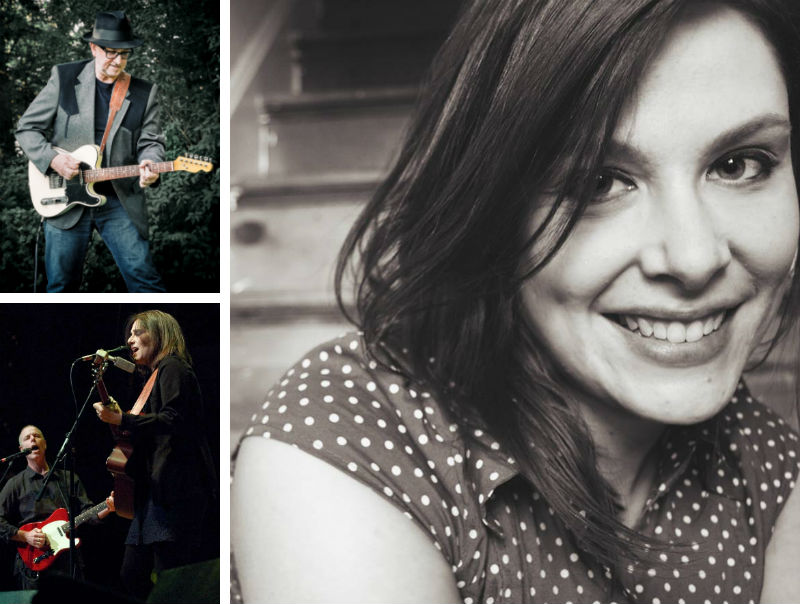 NashBash enters its 11th year of transforming Kerrytown into a giant outdoor party.

“NashBash is basically a block party,” says local musician Bill Edwards, who, along with founders Deanna Relyea and Whit Hill, organizing the 11th annual NashBash to be held on Thursday, August 17. Relyea puts it this way: “This is a music festival that really focuses on the music, which is always of the highest quality.” And Hill says, “Every year it seems to get better: more people, more energy, a really loving and supportive vibe.”

Each of them is right. For one night in August, the Ann Arbor Farmer’s Market turns into the site of a block party/music festival. Areas usually crowded with shoppers and vegetable stalls become the stage and audience seating, while the adjacent parking lot is transformed into an outdoor restaurant and dance floor.

The brainchild of Relyea of Kerrytown Concert House fame and former Ann Arborite dancer, musician, and writer Hill, NashBash brings together local country, bluegrass, and Americana performers with some of the best Nashville songwriters and musicians. “This year's Nashville artist is my good friend Becky Warren,” says Hill. “Becky is a stellar writer of fascinating country-rock songs. She's just put out a concept album called War Surplus. It tells the story of a fictional Iraq War vet and the woman who loves him. Beautiful, interesting, hooky songs with a whole lot of soul and truth. Becky's been touring with the Indigo Girls this past year and I'm so excited that her schedule allowed her to come to play this event. Al and I will be backing her up on as many songs as she'll let us sing on!”

Al is her husband and musical partner, Al Hill. He is also a former Ann Arborite and a singer and multi-instrumentalist who has, among other things, long served as music director for soul diva Bettye LaVette. The Hills have traditionally closed out NashBash and will again this year. “We have been really working on presenting our material as a duo as often as possible; lots of close harmonies, a lot of songs that we haven't put out there much. I have a backlog of maybe 150 songs that I'm trying to look at more closely to see if there might be something there to perform or record. We're planning our first duo record, and it's about time. But we'll be a trio at NashBash, with Pat Prouty, our longtime friend and bass player.”

Local country musician Bill Edwards, who has attended nearly every NashBash and has played the last five, helped book the local musicians and done much of the other behind-the-scenes work of the festival for the last four. “My favorite part is watching throngs of Ann Arborites enjoying great music, mostly original and not always something they've heard before," Edwards says. "Last year, Sally Barris from Nashville followed local favorites Hoodang. The Hoodang set was full-band, electric, and rocking. Sally got up with just her guitar, her great songs, and her voice, and the audience made the transition to something much more intimate in a heartbeat. They were enthralled. That's the magic of NashBash, presenting really good music that people of all tastes can embrace.”

And speaking of taste, there’s also fabulous food at NashBash: BBQ by the Aut Bar, plus plenty of libations, food trucks, ice cream, and more. And even after the Hills finish their last song, NashBash 2017 will not be over. “The Afterglow continues to be a lovely end to the night,” says Hill. “We do a very informal open mic in Braun Court. I hope people come and sing."

“NashBash brings people back every year, says Relyea. “It’s owned by the community and is an example of a grassroots idea that has become a signature community event that brings hearts and souls together.”

NashBash runs 5-11 pm on Thursday, August 17. The schedule, supplemented by Bill Edward’s descriptions, is as follows:

John Holk and The Sequins: "Self-described as a honky tonk, power pop, jangle-psych band. Detroit and Ann Arbor-based, they'll play great original songs from their new CD, Where You Going, in the tradition of Gram Parsons and classic country."

The Whiskey Charmers: "A popular Detroit-based Americana band led by Carrie Shepard and Lawrence Daversa. Fans have compared their sound to riding through the desert with the top down. They've just released their second full-length album, The Valley.”

And finally, Whit Hill with Al Hill and Pat Prouty.