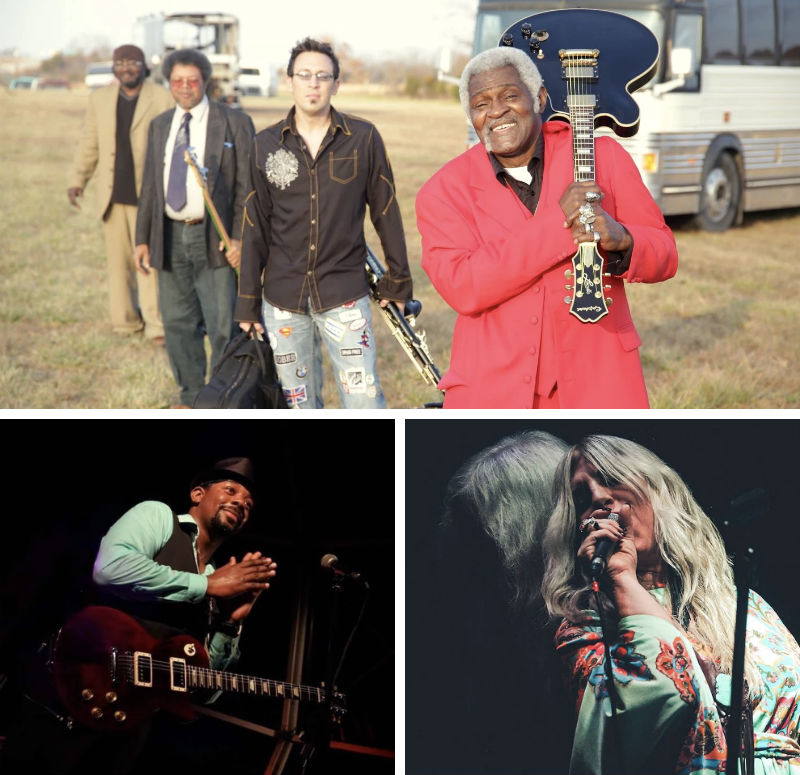 Clockwise: The Norman Jackson Band, Eliza Neals and the Narcotics, and The Chris Canas Band are three of the nine acts who will get blue in A2.

As an East Coast transplant and late-comer to the blues, you can forgive James Partridge for not knowing Ann Arbor's storied history with the world's greatest blues musicians until fairly recently (or exactly blame him -- there's no Beale Street or other marker to speak of).

But as founder of the recently formed Ann Arbor Blues Society and co-organizer behind the return of the Ann Arbor Blues Festival, which takes place Saturday, August 19, at Washtenaw Farm Council Fairgrounds, he's making up for lost time quickly.

Partridge was turned on to the blues by a guitar teacher while taking lessons as an adult and was soon thinking of ways to get more live blues into his life on a regular basis locally.

When he started doing his homework, he soon learned he was basically living in the birthplace of the electric blues festival.

"I started doing some research and was like, 'Whoa!" he says. "Not only did Ann Arbor have blues festivals here years ago, but we invented the blues festival for crying out loud. I couldn't believe that."

The original 1969 Ann Arbor Blues Festival is believed by many to be the first and greatest of its kind, with headliners including just about any name a casual blues fan could think of -- B.B. King, Muddy Waters, Son House, Big Mama Thornton, Otis Rush.

The follow-up event in 1970 was a close second, and after taking a year off, the festival returned in 1972 under new management as the Ann Arbor Blues and Jazz Festival. Under the direction of John Sinclair, the fest expanded to include jazz giants, like Miles Davis and Sun Ra, before dying out a few years later. Another run of Blues and Jazz Festivals ran from the early '90s to mid-'00s with a slightly different format, ending in 2006.

With the 50th anniversary of the original Ann Arbor Blues Festival approaching, Partridge contacted several local event promoters and others in the music industry with the idea of trying to revive the fest in time to commemorate that milestone. When he didn't get any takers, he eventually decided to do it himself, thanks in part to the encouragement of co-organizer and local blues musician Chris Canas.

"The fact Ann Arbor had such a tremendous impact on the genre and on the lives of the musicians who played here and the people who organized it and the people who attended but nearly 50 years later it was like nobody knew that had happened except for a really small group of people was just startling," Partridge says. "I could not fathom that."

With the help of about a dozen volunteers, Partridge and Canas set to booking the venue and artists, securing sponsors, advertisers, and vendors, and promoting the festival. Thanks to a successful GoFundMe campaign, Partridge says attendees can expect a first-rate stage and sound system for the all-day event.

"We've done a significant amount of work in a very short period of time," Partridge says. "Far more than most people ever thought possible. I thought we would need a year of planning, and we put it together in like four months."

Partridge hopes to get at least 1,000 people out for this first "dress-rehearsal" festival Saturday, with his on eye substantially growing the festival each year from there.

"We talked to people who performed in 1969 and '70 and '72 and their management, and they are very aware of what's happening here this year and very interested in participating in the future," he says. "To the extent that this event is successful and advertisers and sponsors are on board for the future, we're going to be able to draw some incredibly talented and big name artists in the future."

For this year's acts, Partridge says the organizers curated a selection of national, regional, and local acts covering a range of styles, from the heavy, blues-rock of the Nick Moss Band to the more traditionalist leanings of Alabama Slim and Benny Turner, who also played the 1972 Blues and Jazz Festival.

"It's so significant to me not just that [Benny] is coming, but that he's so excited about playing here," Partridge says. "That connection to the old festivals and old Ann Arbor and what we accomplished was really important. That's something we want to carry through as we move up into 2019."

It's important to Partridge to honor those earlier festivals and the city's ties to the music while also building what he hopes will be a future for it, to the extent that he sought counsel from previous producers, like Peter Andrews and Sinclair. The latter actually made contact with Partridge when he heard what he was up to.

"I'm in my 50s, and I knew of John Sinclair through the John Lennon song," Partridge says. "He was larger than life. He was a legend to me. The fact that this guy who has been immortalized in song by a member of The Beatles wanted to talk to me was just, I couldn't even fathom that."

In the future, Partridge also hopes to do something ceremonial to honor Ann Arbor and the role it has played in blues music.

"I think it's time the city get its due and the people who participated in that and had the vision to do that at the time also get some recognition," he says. "I'd like the city to become proud of what it did and recognize what it did in terms of blues music and how it shaped what we listen to today."

The Ann Arbor Blues Festival is from 1-11 pm Saturday, August 19, at the Washtenaw Farm Council Fairgrounds, 5055 Ann Arbor-Saline Road, in Ann Arbor. Advance tickets are $35 ($17.50 for kids age 13-18, free for kids 12 and younger). For tickets and more info, visit a2bluesfestival.com.