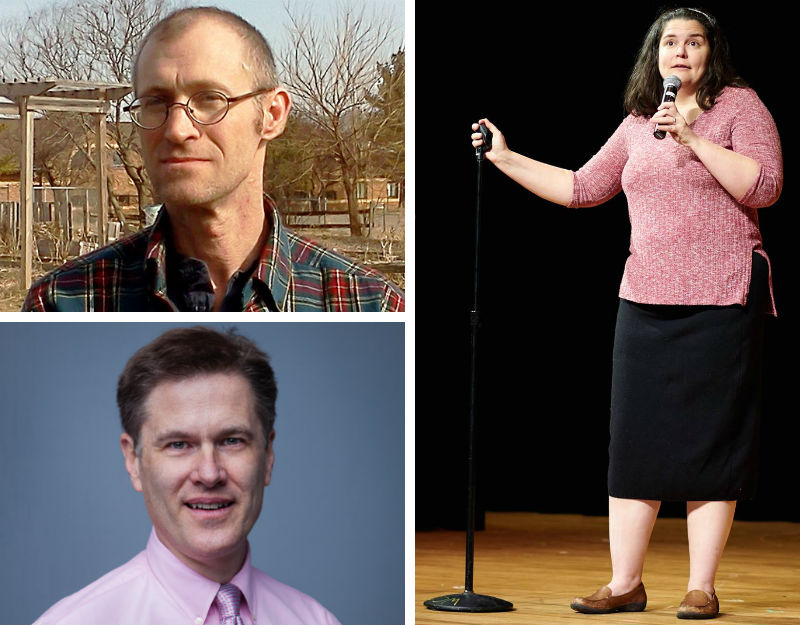 As adults, we often forget how pleasurable it can be shut everything off, stop talking for a while, and just listen to someone read a story out loud.

“There were all these different storytimes for children, and I thought about how much I loved story time as a kid when I was in school,” she said, adding that she then noticed that a group of young Detroiters “had an event that had interesting people reading interesting things. I went to it, and a woman -- not an author -- brought a book she just really liked, a memoir, and read some quick little lines from it. There was a brunch with mimosas, and it was just a lovely event. It wasn’t political, it wasn’t deep, it only lasted about an hour, but it just made me remember that it’s really, really nice to be read to. So I thought, well, why not have something in Ann Arbor?”

With this in mind, Smith has planned Grown Folks Story Time at BookBound on Thursday, August 24, at 7 pm. The theme is “childhood,” since the three participants will read from books they loved as kids.

Smith will likely read from a Mrs. Piggle-Wiggle book, while Ann Arbor novelist David Pratt (Wallaçonia, Bob the Book) is still undecided. "For a while, it looked like 'pigs' was going be a theme," he said. "Well, Charlotte's Web is a big fave of mine, and I also have a unique and interesting piece of writing hanging around that would interpret "pig" in a whole different way. I am also attracted to 1980s queer activists, including David Wojnarowicz, Leslie Feinberg, and Karen Finley -- straight but kinda "queer," if you know what I mean. The time sure seems right for some of their messages!"

Ypsi horror-fiction writer Ken MacGregor said he's narrowed down his choices to two short stories: "The first, because the title sounds a lot like the one Patti is reading, and the second because it's it's one of my favorites; it's not speculative fiction, which is what I mostly write, but it's funny and sad and a little hopeful."

“This is not a book launch, it’s not ‘come buy my book,’ nothing like that,” said Smith. “But I want to get local some local authors out there because depending on the kind of artist you are -- and I’m not saying it’s easy, but if you’re a musician, you can get gigs. If you’re a writer, unless you have a book launch or something, there’s not a lot of opportunities to really get out there in public and share something in a performance setting. One of my first thoughts was that I’d love to hear authors read stuff that’s not their own.”

Attendees should note the “Grown Folks” part of this event, which is decidedly not for kids. Smith plans to bring cheese and snacks for attendees, and as the event’s Facebook page notes, “There may be profanity, wry humor, and pseudo-intellectual banter.” Even so, attendees are encouraged to bring blankets and get cozy while listening to the evening’s stories.

“I didn’t know the folks at Bookbound [Peter and Megan Blackshear] before,” said Smith. “I’d just bought stuff there. But then Ken MacGregor made an introduction over email. I wrote saying, ‘I don’t know if you’d want to do this or not, but ...’ and Megan and Peter immediately said, ‘Yes, let’s do it.’ We met and Megan showed me the space where we would be, and we just immediately clicked. She just got it right away.”

Megan Blackshear concurs. "I can't count the number of times we've overheard customers react to our signs for children's story time with comments like, 'When do we get story time?,'" she said. "While they are generally joking around, I think it does reflect a real sentiment about fond memories of being read to as a child, and a desire to sort of recreate that in a more adult way."

Grown Folks Story Time may become a regular series at Bookbound if the first gathering goes well. "As a small mom-and-pop shop, we don't do a whole lot of traditional author events," Megan Blackshear said. "We do occasionally host book launches for local authors, and a monthly open mic poetry series, usually with a featured poet. I expect Grown Folks Story Time will be more festive, raucous, and unpredictable than most of our other events."

And given recent world events, a lot of people may be in the mood just now for gathering together to listen to a beloved book from childhood.

“This event is not going to solve any world problems, it’s not going to stop the Nazis," Smith said, "but it will be this comforting, safe thing so many of us remember from childhood, which is circle time, or story time. But at this one, there will be swearing.”