Heads Will Roll: Theatre Nova's "The Revolutionists" is equal parts comedy and tragedy 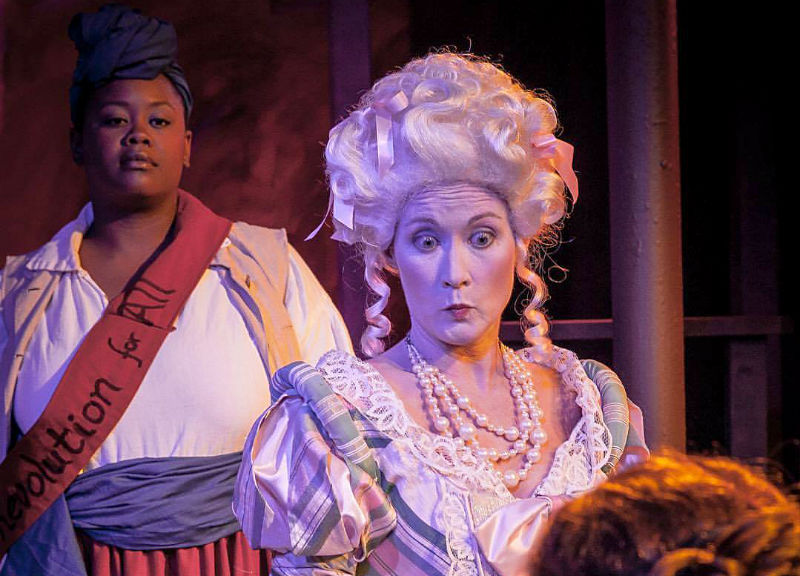 The Revolutionists takes place in 1793, during the French Revolution and the start of the Reign of Terror. But Theatre Nova's production of Lauren Gunderson’s play is remarkably fresh and relevant today. The characters’ language and mannerisms are entirely present-day, and the four strong women the play portrays are fighting for freedoms that many women, racial minorities, and the disenfranchised still do not enjoy even today.

Even though The Revolutionists is set during one of the most horrifying periods in history, and it’s clear that not enough has changed about these issues since then, the play is far from a downer.

It is, in fact, mostly a comedy.

And what a premise for a comedy.

During the chaos and tumult of the Revolution, Olympe de Gouges, a playwright who fancies herself an activist, is struggling to find inspiration for her next work when she is bombarded by an old friend and two strangers, all seeking counsel, or the help of her pen to create and cement their legacy. The ensuing dialogue is witty, the characters are feminists, and we learn about lesser-known but fascinating figures in history. What more could we ask for?

Diane Hill is equal parts hysterically funny and touching as de Gouges, who dreams of the glory of being a writer on the front lines of the Revolution, documenting the fight for freedom, but can’t work up the courage to actually be on the front lines.

One of the most pivotal moments, historically, on those front lines was the killing of radical journalist and politician Jean-Paul Marat by the young assassin Charlotte Corday, who is perhaps the feistiest of our heroines in The Revolutionists. Sara Rose brings wonderful fire and conviction to Corday, but where she truly shines is in her softer, more vulnerable moments.

Melissa Beckwith has the equally enviable and unenviable task of bringing to life the famously infamous citizen queen, Marie Antoinette. She is “hilarious,” as her character is wont to say. Her Antoinette is privileged, deliciously ditzy, endearingly ignorant, and in her own way, wiser and more discerning than she was ever credited while she was queen.

Obviously, Antoinette, Corday, and de Gouges were all real people. But Olympe’s friend Marianne Angelle, a free woman from Saint-Domingue, now Haiti, is an invented character that represents the many Haitian people who fought for their freedom from France. K Edmonds’ Marianne is in some ways the most aware of the realities of what they are fighting for, and whom they are fighting. Edmonds imbues Marianne with a steely, sometimes slightly sardonic resolve, which never crumbles even when she is the most beaten down.

Director David Wolber’s firm guiding hand infuses the production with power and a steady pacing that finds the balance between the uproarious and the devastating; the energy never dips. The set, props, and costumes, all designed by Forrest Hejkal, are spare (except for Marie Antoinette’s dress, which has just the right amount of frivolity) and exactly what are needed to tell the story to fullest effect.

There is minimal but beautiful lighting designed by Daniel C. Walker, and very few (but extremely crucial) sound cues designed by Carla Milarch; they are all just dramatic enough that we notice them and not enough that we are distracted by them. The music is particularly effective, mostly in the transitions and in the pre-show, which features powerful, women-led songs.

The most famous symbol of the Reign of Terror, Madame Guillotine, stands solemnly in a corner of the stage, an ever-present reminder that while the show is in large part a comedy, the horrors of these women’s reality looms large. Yes, you know heads will roll, and while not graphic, those scenes are intense. But the courage, resolve, and wit of these four unlikely allies gets us through the heartbreaking moments. And Theatre Nova’s production admirably finds the equilibrium in the play’s mix of impending tragedy and many “hilarious” quips, fueled by badass women power.

“The Revolutionists” runs through September 17, Thursday-Saturday at 8 pm, Sunday at 2 pm. Theatre Nova is located at 410 W. Huron St., Ann Arbor. Tickets are $20, or pay what you can. Visit theatrenova.org for more info.