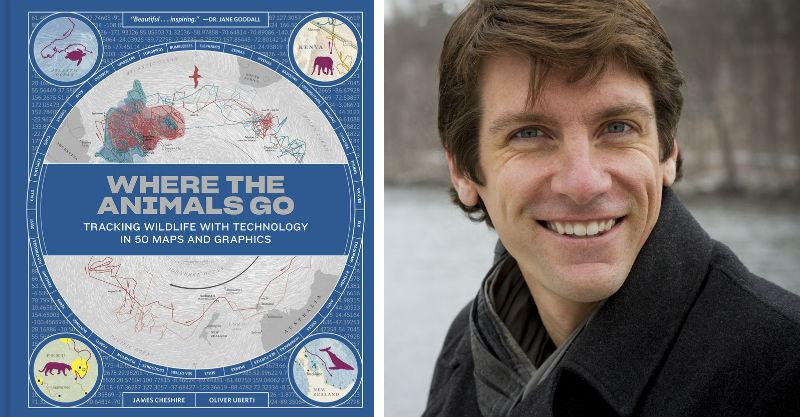 Oliver Uberti's new book, Where the Animals Go, was conceived in Ann Arbor.

On Tuesday, September 12, designer and author Oliver Uberti returns to Ann Arbor to launch the Where the Animals Go at Literati. It's a full-circle journey for the book and Uberti.

"I discovered graphic design as a student at the University of Michigan. I drafted many sections of Where the Animals Go in Literati’s cafe," Uberti said. "I found the book’s epigraphs on Literati’s shelves. Quite literally, Ann Arbor is where this book originated. I’m very excited to come back to say thank you."

Where the Animals Go is the first book to offer a comprehensive, data-driven portrait of how creatures like ants, otters, owls, turtles, and sharks navigate the world. Uberti teamed up with James Cheshire, whose award-winning maps have appeared in publications like the Financial Times and The Guardian, to create this collection of charts and maps that tell fascinating stories of animal behavior through an intersection of technology and design.

"James and I are not biologists. He’s a geographer; I’m a designer," Uberti said. "That’s the beauty of the animal-tracking revolution. The convergence of ecology and technology invites more people from more disciplines into the conservation conversation. We hope this book will inspire readers to get involved in any way they can."

The book has already earned incredible praise, including from legend Jane Goodall, who called Where the Animals Go “beautiful as well as informative and inspiring.” We chatted with Uberti ahead of his visit.

Q: How does it feel to have the endorsement of Jane Goodall?
A: When you work on a project for years, it’s easy to lose perspective. You set out to do a good job, to make a difference. By the time a book comes out, you’re too close to it. A terrible little voice wonders if your words and images are even worth the paper they’re printed on.

For Dr. Goodall to say she has “no doubt our book will help in the fight to save wildlife” ... I mean, it chokes you up. She silences that terrible voice. In so many ways, she is a light in the darkness.

Q: On your website you say that you hope the book inspires new conversations about the needs of animals. How does this intersect with advocacy on issues like the sixth extinction or climate change?
A: To protect animals, we need to protect where they go. Tracking technologies allow us to see habitats we can’t see for ourselves: the undersea rest stops of humpback whales; the mid-ocean feeding areas of albatrosses; the nocturnal wanderings of a jaguar. With such fine-scale geographic information, conservation efforts can be targeted on specific areas at specific times of year. For example, the same nutrient-rich waters that attract migrating albatrosses also attract longline fishing boats. Their baited hooks ensnare and drown an estimated 100,000 of these endangered birds a year. Thinking aloud here, what if longliners were banned from key stopover areas during the predictable months of albatross migration?

As for climate change, we highlight a few examples where technology now allows animals to tell us what’s happening where they live. In the warming ocean around Antarctica, elephant seals have become our sentinels, thanks to an international initiative led by Mike Fedak of the Sea Mammal Research Unit at the University of St Andrews in Scotland. The seals, which can dive as deep as 1,500 meters, collect temperature data from the cool, deep waters that drive ocean currents and from areas below the ice that even the most intrepid oceanographer could never reach. 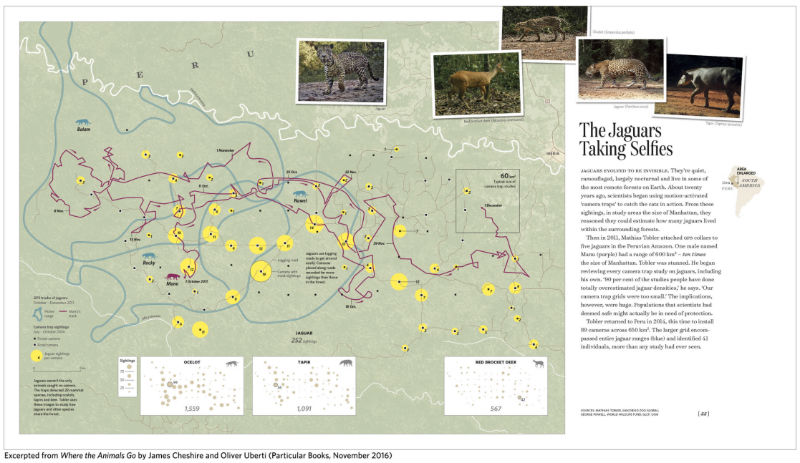 Oliver Uberti, Where the Animals Go.

Q: Did you discover anything about how animals interact with man-made objects like pipelines or border walls?
A: Border walls and pipelines make headlines. The more insidious barriers are roads and fences. Within an hour’s drive from where I live in Los Angeles, two populations of mountain lions are effectively marooned by freeways and human development. To ensure genetic diversity of the population in the Santa Ana Mountains, at least one mountain lion needs to cross Interstate 15 -- and successfully breed -- every few years. However, of the 146 mountain lions that researchers have genetically sampled since 2001, only seven have crossed the road. One has reproduced.

It doesn’t have to be that way.

My coauthor James got married in Slovenia in August. While touring the country in the days before his wedding, I drove under overpasses thick with grass and trees. The road signs were in Slovenian, but I recognized the icons for wolves and bears. These bridges were wildlife crossings, built specifically to aid the free movement of animals. A vegetated bridge across I-15 in California would link the Santa Ana mountain lions to other populations in a chain of wilderness all the way to Mexico.

The benefits aren’t hypothetical. After a wildlife control fence in Botswana was dismantled in 2004, zebra resumed a migration they hadn’t made in 36 years. Animal populations are resilient. They can rebound if we give them a chance.

Q: While the book is a fascinating data and technology story, you also experienced many moments not mediated by technology with animals in the wild in your prior work and work on this project. What was your favorite or most memorable?
A: Where the Animals Go was inspired by the death of an elephant named Annie. Years ago, I made a map of her travels while working for National Geographic. Her story was the first time a map had ever engaged me in the life of an individual animal. The shift in consciousness it provoked was irreversible.

So the most memorable moment in writing this book had to be meeting an elephant named Kulling. She was an elder female from a family of elephants in Kenya that Save the Elephants (STE) had been studying for two decades. One day in March 2016, while I was visiting STE, Kulling’s GPS collar sent out a distress signal. She was moving unusually slowly. It turned out that she’d been shot four times. Vets promptly treated her. Still, her fate was uncertain. A few days later, STE allowed me to tag along when they went to check on her.

We drove for hours through the bush. Eventually, we came upon a circle of trees. Peering at us from within the branches was Kulling -- alive. I could see a splotch of caked blood on her left ear and another on her trunk. She held her front left leg aloft like a person on crutches. It was heartbreaking.

STE had asked me to document her condition, so I moved around the trees in search of a clear angle for a photo. Kulling followed me with her eyes. Her ears flapped. I crouched down. When I stepped forward into the open, she reared up and attempted a short charge -- a very good sign! As I was told, if she was moving well enough to charge me, there was a chance she might recover.

Q: Your project is a great example of technology in service of stewardship, thoughtful and innovative application of technology. What other projects do you admire that do something along similar lines?
A: As much as our book is about animals, it is also about the people who study them. Their data and insight have given individual animals a voice that we hope we have been able to amplify through our maps and graphics.

In particular, the eBird team at Cornell have created a great app called Merlin Bird ID. It makes identifying birds in your backyard easy and rewarding. Plus, each successful ID contributes to the largest database of bird observations on the planet.

I also have a lot of admiration for the guys at Project SNOWstorm. Their snowy owl research is world-class, mostly crowd-funded, and led by volunteers who fight for owl conservation in their spare time. On their website, you can follow dozens of owls, including a few in southeast Michigan.

Anna Prushinskaya is a writer in Ann Arbor. Her collection of essays, A Woman Is a Woman Until She Is a Mother, will be out from MG Press in November 2017.

Oliver Uberti's launches "Where the Animals Go" at Literati, on Tuesday, September 12 at 7 pm. Visit literatibookstore.com for more details.

This is some great review…

This is some great review that you have done of those films. In my opinion the most hideous is the monster that is living inside us. We need to discipline it first to take the first step for being a better human being. Also thanks www.driveonelimo.com sharing update on the sale on Pandora bracelets.