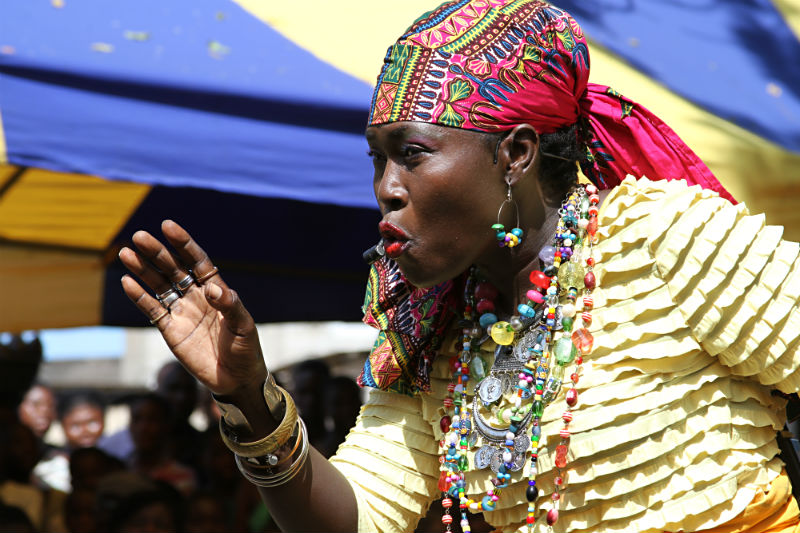 National Theatre of Ghana will turn Ten Blocks on the Camino Real into a Ghanaian Concert Party."

Theater-goers in Southeast Michigan will soon have four chances to see a unique production of Tennessee Williams’ one-act play Ten Blocks on the Camino Real, the foundation of his later expanded work Camino Real. The National Theatre of Ghana -- aka Abibigroma, the Ghanaian name of the theater troupe -- will perform the one-act play at outdoor venues in Ann Arbor, Ypsilanti, and Detroit in a performance style known as Ghanaian Concert Party.

David Kaplan, the production’s director and also the curator of the annual Provincetown Tennessee Williams Festival in Massachusetts, said he “learned about Ghanaian Concert Party in 1997 from someone in the Peace Corps who had seen performances in Ghana. Concert Party is a form of outdoor theater that combines African stock characters, clowning, singing, and dance -- and social satire. I love clowning that delivers insight."

Kaplan "thought for years about a suitable text" to adapt for a Ghanaian Concert Party "and it seemed a perfect fit for performing Ten Blocks on the Camino Real. The American actor Greg McGoon, who had worked with Abibigroma, introduced me to the ensemble. It fit their mission, too, performing popular theater as a way to build community.”

Tennessee Williams was already famous for A Glass Menagerie and about to become even more so for A Streetcar Named Desire when he wrote Ten Blocks on the Camino Real. Kaplan says, “Ten Blocks came first as a one-act play that began as episodic scenes worked by Elia Kazan with actors from the Actors Studio, including Eli Wallach as Kilroy. The one-act version was finished in 1946. It was experimental work, very different than the usual realism of the Studio and different from Kazan’s work directing Streetcar Named Desire in 1947. The one-act was expanded by Williams into a full-length play with 16 blocks titled simply Camino Real. That opened on Broadway in 1953 and puzzled critics expecting something similar to Glass Menagerie or Streetcar or Summer and Smoke.”

Williams himself was very energized about Camino Real. In an interview in The New York Times just before the Broadway opening he said, “More than any other work that I have done, this play has seemed to me like the construction of another world, a separate existence ... the appeal of this work is its unusual sense of freedom.”

“Kazan and the actors were very excited to be breaking new ground,” says Kaplan. “Eli Wallach told me on the phone, in the 1980s, they were shocked after they opened in Washington that not everyone shared their pleasure in it. The earlier Ten Block version is terse, and much more focused on the simple story of an innocent man caught up in a city of nets.” 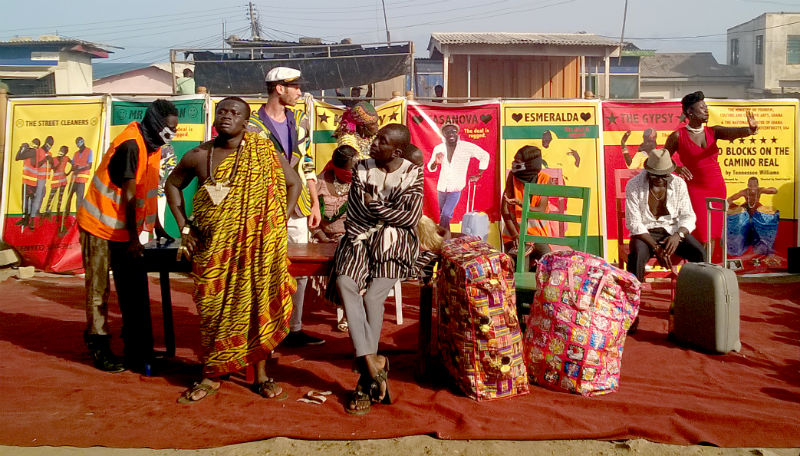 While Ten Blocks is unusual in the Williams canon, it's was not out of character for him to push boundaries. “The play reminds us that Williams, throughout his career, necessarily experimented with unexpected forms in order to deliver unorthodox content," says Kaplan. "And this production exemplifies the confluence of the world’s popular theater forms: Italian commedia dell’arte, Ghanaian Concert Party, Brecht’s learning plays, Chinese opera (the source of Brecht’s ideas), and American vaudeville sketches."

All of Williams' plays are about the same thing: love, youth, beauty, and summer, none of which last long. As a result, these transitory things need to be remembered, talked about, and written about. That’s the imperative for performing the plays. We live knowing we will die, the glass animals will break, the match in the dark will blow out, but while the glass shimmers or the match blazes we enjoy the light. In Ten Blocks, Kilroy enters knowing he has a heart so enlarged he will die from one strong kiss -- nevertheless, he wants to kiss Gypsy’s daughter. But first, he must convince her he is sincere and asks if she believes him. “For a while,” she answers. He replies “Everything’s for a while. For a while is the stuff that dreams are made of, Baby!”

But what it is about this play that enables it to speak to two such different cultures as mid-20th century America and 21st century Ghana? How much does Ten Blocks reflect what was going on in the world when it was written, with WWII having just ended, and what makes it relevant today? “As long as there are travelers who come to unknown cities,” Kaplan said, “the story of the play will be relevant.” Then he quoted some lines from Ten Blocks:

PROPRIETOR: ... An Indian died of thirst today in the plaza. You see, the springs are dried up and there isn’t a drop of water in the fountain and not everybody can afford to buy wine.
JACQUES: Doesn’t the government do anything about it?
PROPRIETOR [vaguely]: Ah, the government! [Fans himself with a palm leaf fan.]
JACQUES: What kind of government is it?
PROPRIETOR: Democratic.
JACQUES: Well, I suspect it is really just a big corporation in which a few are stockholders and all the rest -- petty wage-slaves!
PROPRIETOR: Does that strike you, sir, as being at all unique?
JACQUES: I have never been in a country, nominally Democratic or anything else, where even the most underprivileged citizen would be permitted to die of thirst in front of an hotel overflowing with wine.
PROPRIETOR: Have you -- travelled, Senor?

“In America,” said Kaplan, “That WWII ended in victory maintained a complacency among the victorious that all was right with the world. It wasn’t. It isn’t.”

All four performances of Ten Blocks are free and open to the public -- and relatable to everyone. “The jokes, verbal and physical, in rehearsal and in performance, cross borders," says Kaplan. "If you see part of it, or linger to see the whole, the play makes an impact.”

The National Theatre of Ghana will perform Tennessee Williams’ "Ten Blocks on the Camino Real" at the Ann Arbor Farmer's Market at noon on Wednesday, September 13, then on the UM Diag on Friday, September 15, also at noon. The production will move to the Ypsilanti Farmers Market on Saturday, September 16 at 11 am and end up at CMAP Detroit on Sunday, September 17 at 2 pm. For more information, visit lsa.umich.edu/world-performance.