After cancelled flights, Darlingside hit the road to sing harmonies for The Ark 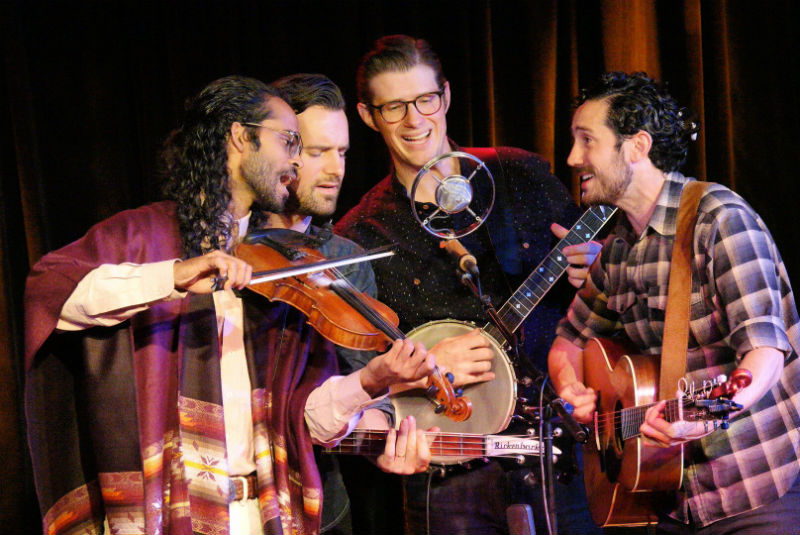 Real-close harmonies. Photo of Darlingside at The Ark by Andy Rogers.

In order to play at The Ark’s nearly sold-out fall fundraiser on Sunday night, Darlingside had to skedaddle out of Kansas City after a show on Saturday night. The Boston-based quartet packed into a minivan with its sound engineer and drove through much of the night.

This hadn’t been the original plan, but the sudden appearance of a 200-mile-wide storm system meant that Darlingside's flights, scheduled several months earlier, weren’t going to happen. “So we arrived in Ann Arbor this morning, badly in need of a shower,” confessed cellist/guitarist Harris Paseltiner.

The innovative folk foursome surely wanted to honor their commitment, but there may have been a little something extra pushing them to go the extra mile(s). For earlier in the band’s career, when Darlingside shows consistently drew just a small handful of people, the quartet arrived at The Ark for the first time and found about a hundred people willing to listen to its music and give the group a chance.

That local affection for the band has only grown over time. “Things are going well for us elsewhere,” said mandolinist/violinist Auyon Mukharji, “but not as well as in Ann Arbor.”

Darlingside -- whose gorgeous close harmonies regularly draw comparisons to Simon & Garfunkel as well as Crosby, Stills, Nash, and Young -- formed in 2009, after the musicians met while students at Williams College in Williamstown, Massachusetts.

The band’s unique name came about when a songwriting professor quoted British literary critic Sir Arthur Quiller-Couch’s admonition to “murder your darlings” -- which is to say, when writing, one must vigorously prune for self-indulgent passages. The musicians took this lesson to heart, but they also thought “Darlingcide” might engender confusion, so they changed the “c” to an “s.”

Plus, an earlier iteration of the group featured a drummer, but when he left, the remaining quartet started putting more emphasis on their vocals, gathering around a single condenser microphone to more seamlessly blend their voices together. This has since, of course, become the band’s trademark.

Sunday night’s two-hour program at The Ark began with the haunting “God of Loss” as a preamble, then shifted into the more up-tempo “Go Back,” one of the best, most captivating songs in Darlingside’s catalog. (In addition to a handful of EPs, the band has two complete albums, 2012’s Pilot Machines and 2015’s Birds Say, and a new album in the works.)

With a chorus that goes, “You can’t live in the past / But the only way to go is to go back” the song fittingly gets at the heart of the band’s artistic identity: the group sounds charmingly retro while also making music that sounds groundbreaking and wholly new. In addition, the lyrics “So we hold to who we are / Even into the arc” earned a knowing laugh, given the long-established host venue’s name.

Yet the irresistible pull of Darlingside primarily involves the close, unifying harmonies that the crowd not only hears but also senses among the bandmates. A good-natured, genuine closeness among the quartet comes through -- a joyful ease in being with each other, and by extension, the crowd -- and this cohesion, paired with Darlingside’s masterful musicianship, makes for a pretty fantastic evening of music.

Other highlights in Sunday’s program included the cheeky, delightfully fanciful “Harrison Ford"; the darkly pulsing “Blow the House Down”; the infatuation-induced giddiness of “My Gal, My Guy”; and “The Ancestor,” a song made all the more poignant by bassist David Senft’s introduction, during which he announced for the first time on a stage, “I’m going to be a dad in about a month.”

For this reason, the band will now be going on a “paternity leave hiatus,” because as Mukharji noted, “We function as a foursome, or we function as a no-some.”

After spending one enchanting evening with Darlingside at The Ark, I considered this simply an objective truth.

Encore: “The Fourth of July”