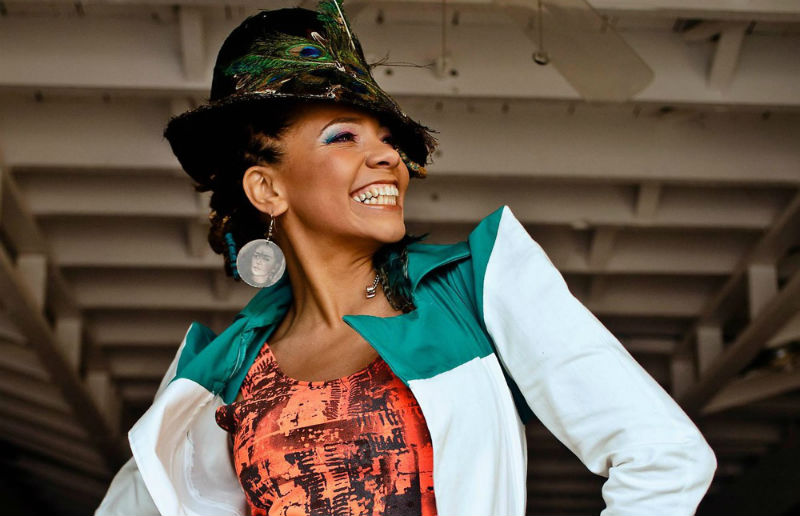 jessica Care moore's spirit and charisma cast a wide next.

I didn’t grow up going to church, but seeing the poet-playwright-author-musician-activist-performance artist jessica Care moore do her thing is what I imagine an incredibly moving church experience feels like.

moore’s appearance at the Michigan Theater on September 14 was the kickoff event of the 2017 Penny Stamps Distinguished Speaker Series. The series aims to bring innovators from a wide variety of fields to the university in order to interact with and inspire university students, faculty, and the greater community. (See the full fall 2017 lineup here.)

I wasn’t going to attend this performance. I had read that moore's forthcoming collection of poems, We Want Our Bodies Back, honors the life of Sandra Bland, who was found hanged in a jail cell days after being arrested on a traffic stop. I prefer to contemplate these topics in the privacy of my own home, or at least within the confines of my car.

But I couldn’t stop thinking about this event. Something about the Def Poetry Jam star and five-time Showtime at the Apollo winner, whose work is featured in the Smithsonian’s National Museum of African American History and Culture, mesmerized me. Perhaps it was the photograph of moore riding a brown and white horse, sitting tall in gold boots, wearing multiple necklaces and a top hat as she held a bow. Not a bowtie -- a compound bow for archery. I couldn’t resist the appeal of a performer who embodies the creative spirit in her own personal way. 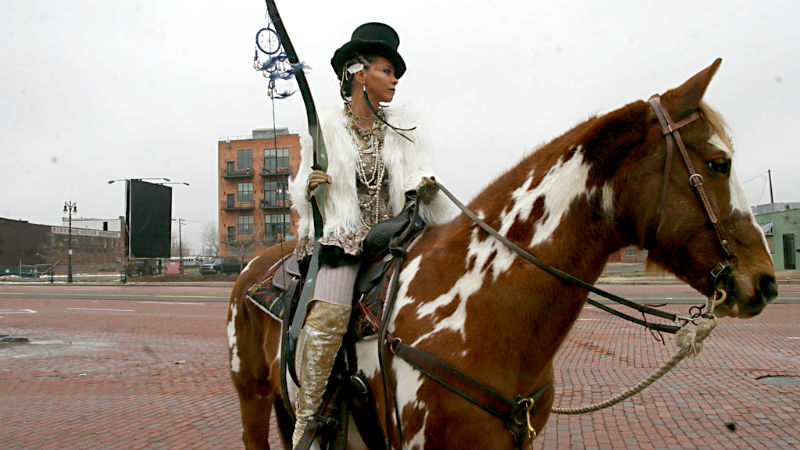 jessica Care moore during the cover-photo shoot of her 2015 CD, Black Tea: The Legend of Jesse James.

This spell likely compelled me to participate when moore invited the audience to stand and clap to the music as she opened her performance. Or perhaps I was overstimulated; moore’s charm, the dynamic video behind her, and the music from drummer Marwan Amen-Ra and DJ Stacey "Hotwaxx" Hale were a lot to take in.

moore talked to the audience, which included many Penny Stamps School of Art and Design students, about the importance of hard work, advising, “You don’t just get here.” She has been doing this work for over 20 years. Then moore shared the poem “You Want Poems,” which touches on what goes into creating this sort of work.

Before I knew what had happened, my hand was in the air waving in understanding. It was in this moment that I wanted to put my notebook away and just enjoy the experience, let it wash over me, forget that I had planned to write about it at all.

“I call myself a post-riot baby.” --jessica Care moore

moore’s father was from Madison, Alabama, but he moved to Michigan to carve his own path, working for himself. To illustrate his individualism and self-determination, moore showed the audience an image of her father wearing a white suit and bright red shirt while leaning on a Cadillac. She invited us to take him in, stating, “He can’t work for no white man.” As moore's successes added up, she wished her father, who died in 1994, had been able to live to see them: “He was God to me. That’s what God looked like.”

It was when she read the poem “There’s a Fire in My Belly” that I specifically focused on the others on the stage. They appeared to be totally in tune with each other, as if they spoke their own language that didn’t require their speech. But they were not silent. The barefoot Amen-Ra played the drums in a way that drew the listener deeper into moore’s work. Along with DJ Hotwaxx, the trio moved through their own intimate choreography that captured the audience's attention and forced our brains to hear and feel the words and rhythms as one.

moore allowed the audience to behold her humanity as told through her life’s twists and turns. She has a journalism background, and many years ago she had thought that she’d be a reporter on a national news station. But moore didn’t want to straighten her hair, something that would have been required of her at the time to pursue that career option. She talked about the dissolution of her second marriage, which brought her back to Michigan where she would have to figure out how to make a living as a performance artist. She talked about her brief experience with public assistance at a point in her life when she needed to get back on her feet. She talked about trying to look ugly, pulling a baseball cap on. The scene set, she shared a poem about this experience and the humiliation that came with it.

“When black boys are killed and you are a mother of black boys ...” --jessica Care moore

As moore performed a poem that she wrote after Trayvon Martin was killed, the screen behind her showed images of Martin, Tamir Rice, and Michael Brown. As a mother of a black boy myself, these were the images that had almost made me pass on the show. I sat in my seat unable to look away from these baby faces. It is here where I felt the emotions that I prefer to save for private spaces. It is here when I imagined what it must feel like in a house of worship to be overcome by forces bigger than oneself.

“If you don’t make black boys your children, too, there’s something wrong with you.” --jessica Care moore

This was not a show for pure passive enjoyment. moore implored audience members to think about their roles not just with respect to other people’s children, but also on topics such as gentrification. Of the changes happening in Detroit, she says, “It’s not gentrification; it’s colonization.” She wondered aloud where, now, are the homeless people she used to see on the Cass Corridor? “This is what colonization does -- people disappear.”

moore is not against the new businesses and amenities coming to Detroit. She joked that she likes to drink coffee, too. But she also recalled her memories growing up in Detroit, being a young girl walking to school. Unapologetically, she pointed out the irony of transportation being a problem in Motor City when people are simply trying to get their children to school. She warned about disparity, challenging the audience, “You think another rebellion won’t happen?”

I left the evening both moved and abuzz with things to think about. I left happy that I had come, like a tired mother who dragged herself to church despite every temptation not to -- I left energized.