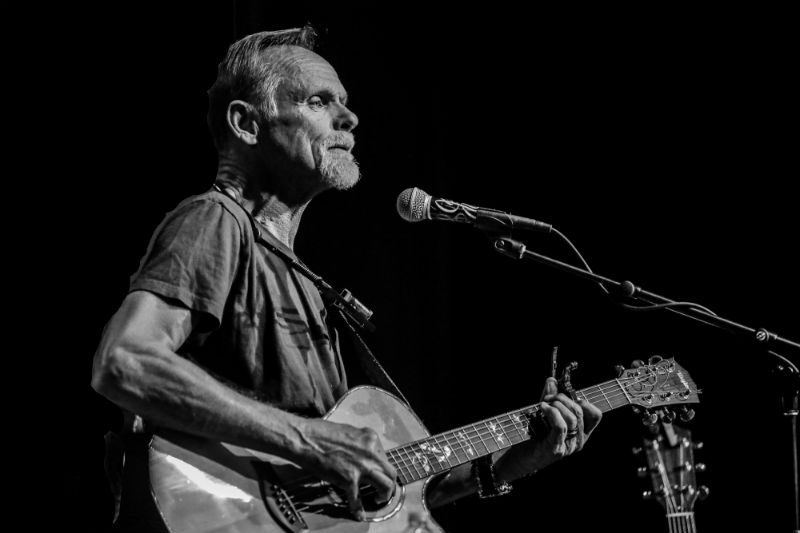 Jonathan Edwards earned his first performing check 50 years ago and his first hit with “Sunshine (Go Away Today)” in 1971.

When Jonathan Edwards’ song “Sunshine (Go Away Today)” came out in 1971, it seemed to speak to the anger and the frustration that many felt at Nixon, the war in Vietnam, and other aspects of the establishment. But it did it in a memorable, catchy, almost joyful way.

Another song on that first Edwards recording, “Shanty” is still played by many classic rock stations around the country on Friday afternoons as a way of signaling and celebrating the beginning of weekends. (“'Cause we gonna lay around the shanty, mama / And put a good buzz on.”)

Edwards still tours and plays in Ann Arbor regularly, and he’ll be at the Green Wood Coffee House on Friday, October 6 at 8 pm. I spoke with him on the phone recently.

Q: “Sunshine” was not your first song, and there have been many others since then. How do you go about songwriting? Are you one of those writers who waits for the lightning bolt of inspiration to hit, or do you have a regular routine where you sit down, start writing, and invite the muse to show up?
A: That would be more me, waiting for the lightning bolt, then inviting the muse in and making her comfortable. I know a guy, a very successful songwriter in Nashville, who claims, and I believe it’s true, that he writes one song every 30 days. Every month he writes a song, forces himself through it (laughs) and has 12 new songs every year, like clockwork, for the last 30 years. There’s many ways to do it. I go sometimes for months without putting a pencil to paper, then all of a sudden, boom, I have three songs before I get up. I wish I had some sort of a method and procedure that I followed, but I really fill up the bucket with life experiences and then it all comes pouring out when the time is right. And I’m OK with that.

Q: It clearly works. You’ve also recorded many songs by other writers.
A: That’s such a part of my process, to find great songs that I can believe in from my core, make them my own, and find a way to get into them every night. As a result, half the songs on my albums have been other people’s songs.

Q: How often do you perform now, compared to say, 1971, when “Sunshine” first came out.
A: I’m down to about 70, 80 shows a year. I’m a weekend warrior: I go out for Friday, Saturday, Sunday and come back to real life in the garden and my family, and other things that interest me besides sitting in a van. (Laughter) For a few years after 1971, I did 250 shows a year. It was crazy. All I was doing was getting in and out of buses, planes, and hotels. I so looked forward to getting a chance to play. The rest of the time was pretty horrible. (Laughs) But, I still managed to have a hell of a lot of fun!

Q: Do you perform mostly solo?
A: It depends. If I’m close to home I bring a dear friend of mine named Tom Snow to play piano. We have a pretty incredible communication and dialog between us musically on stage. It’s a real treat to have someone like that by my side. But if I’m flying, or for long-distance travel, he’s got a family that he’s really committed to and involved with, and a whole other career on his own, and so I do a lot solo. And I love that, too, because that allows me to do songs that I wouldn’t ordinarily do, or it allows me to do requests that Tom might not know. It gives me a chance to get out there and sort of, if you’ll pardon the expression, “man-to-man” work my show and really concentrate on my guitar playing, and my groove, and my pitch, and my engagement with the audience.

Q: Would you talk about collaborations on your recordings. On your latest one, 2015's Tomorrow’s Child, you have some very familiar names: Vince Gill, Shawn Colvin, Jerry Douglas, Allison Krauss. Are these people who you’ve had musical relationships with over the years, or did you just invite them for this recording?
A: No. I’ve known these people all my life. And even though I haven’t called on them before to collaborate or sit in on my projects, I felt this was the album to do it on, not knowing how many more there are going to be. The time was right to not wait. And so, I started calling. I think I called Jerry Douglas first and he said, “Well sure, I was waiting for you to ask. I heard you were recording. I’d love to.” So, I got energized and I called up Shawn and she said, “Sure, send me the tape and I’ll put it up in my own studio.” The album was done in three days and, then we had what I call the "star-power overdub" some months later, waiting for everybody to clear their schedules and get off tour. It was such a pleasure, and such a gift, to be joined by Vince Gill, who I’ve known since we worked on Cheryl Wheeler’s record. Allison Krauss ... I met her at some bluegrass festival when she was 11. These people have always been in my corner, and always interested in what I’m doing, and maybe how they could help, and so I finally called that number.

Q: You’ve been playing music in front of audiences for a long time now. Could you reflect on what that means to you, and maybe how that has changed for you over the years?
A: I’m just writing a song now about how I haven’t really changed anything (laughs) in the last 50 years. I’m celebrating my 50th year this September of the day I got my first check.

Q: Wow!
A: Yeah! But you know, I really haven’t changed anything. I listen to the same people I’ve always listened to: Otis Redding, Ray Charles, Aretha, George Jones, Merle Haggard, you know, the people that artists usually name as their spiritual influences. And I still have the same instrumentation, I still love acoustic music, I still love acoustic instruments, I love pedal steel, I love the dobro, and piano has always loomed large in my recording. I still sing the same sorts of songs that I always have, the same basic subject matter of life and love and this crazy world we happen to inhabit. Nothing much has changed. But about the audiences ... audiences have become a lot more sophisticated, a lot more experienced in listening to music, and going to venues. And so, it puts a little more pressure on us than it used to. When I started walking out there with my acoustic guitar and a harmonica, not many people were doing it, and now, of course, everybody does it. And so, people have become more accustomed to the guy on stage with a guitar. It really puts a lot more onus on us to do something different, and to bring it every night, to engage personally with the audience, which I love to do, and which differentiates my live experience from people sitting home and listening to CDs. Anyone can do that, and I try to bring something different, I try to bring something new to the party. I bet 75% of the shows I play are repeat shows, year after year. So, I try to bring something new: new songs, new attitude, new energy, new depth, new honesty, new authenticity. I really take all of that very seriously, especially my musicianship and my singing.

Q: When “Sunshine” came out in 1971 I, along with everybody else I think, assumed you were talking about Nixon. Do you have any songs in the works about the most recent election?
A: (Laughs) I’m doing a cover version of my own song, “Sunshine”, and I’m mentioning his name in it, the way I used to mention Nixon’s name in the '70s when he was president and I was a scared, angry young hippie. I’m doing it a little slower, a little more in depth, sort of concentrating on the protest song that it was, and didn’t sound like, back in the day.

Q: What do you see ahead of you. In other words, what will you do in the next 50 years?
A: (Laughter) That’s right, I’m celebrating my first 50 years! (More laughter) I’m just gonna keep on keeping on to the best of my ability. I’ll keep calling in collaborators, keep sharing the music, keep sharing the experience. Because it’s such a gift; I am blessed that I can go out night after night and engage with audiences and let them into my crazy world and maybe let them forget about things that are going on in their crazy world. I really appreciate folks coming out to support live music. It’s such a pleasure and I’m so grateful.