America's librarian, Nancy Pearl, penned her own novel for the stacks 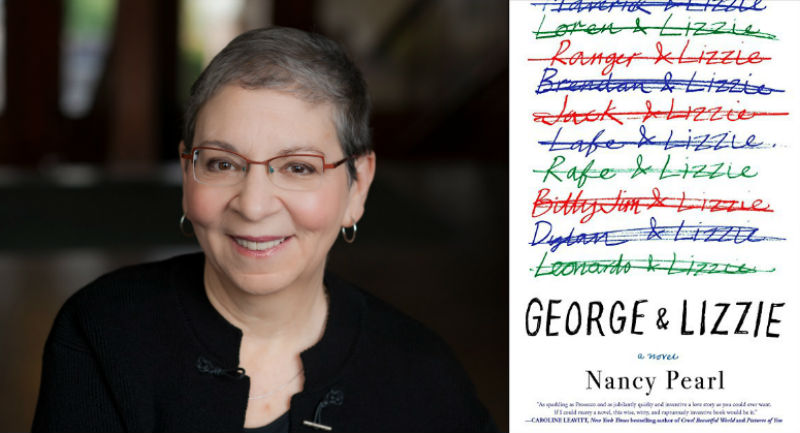 NPR regular Nancy Pearl wrote her debut novel after longing for the "perfect thing to read."

Nancy Pearl -- coming to Nicola’s Books on Wednesday, October 4 at 7 pm to talk about her new novel, George & Lizzie -- may be the only person in America who could be referred to as a “celebrity librarian.”

For she’s regularly featured on NPR, where she recommends and discusses books; and she was the model for a librarian action figure that boasts “amazing shushing action!”

But locals who’ve heard Pearl on the radio may not realize that she has deep local roots. Though she now calls Seattle home, Pearl grew up in Detroit and studied library science at the University of Michigan.

“I remember being addicted to Judy Collins and Joan Baez and Joni Mitchell -- that was the soundtrack for my time in Ann Arbor,” Pearl said during a recent phone interview. “The other thing about being in Ann Arbor at that time, of course, was the bookstores. That was when Borders was still this little bookstore. And I lived in the co-op system while I was at Michigan. I have a lot of fondness for those times.”

Regarding Pearl’s chosen profession, the die was cast early on.

“I grew up in Detroit, in a lower-middle-class family, and home was not a place where I felt welcome or loved,” said Pearl. “So I’d go to the library all the time. I’d go every day after school, and on Saturdays, I’d ride my bike there in the morning. Those librarians -- particularly Francis Whitehead -- I felt loved by them and welcomed by them. I think they recognized early on that I was a reader, and they helped me discover these wonderful, wonderful books to read that gave me a way of looking at the world in a way that wasn’t how I was seeing it. They gave me kindness and the gift of reading. And when I was 10, I was a do-gooder, and so I felt like I wanted to be a children’s librarian and help other kids like she helped me.”

As an outgrowth of her work as “America’s librarian,” Pearl has previously published books packed with suggestions for what to read when in certain moods or situations (“Book Lust,” “More Book Lust,” “Book Lust to Go,” “Book Crush”). But her latest release, George & Lizzie, marks Pearl’s first foray into novels -- though writing a work of fiction wasn't a longtime desire.

“It was a great surprise in a way when it did happen," said Pearl. "I had written a lot of poetry in high school, in Detroit, and in college, and a few years after that, until I was probably in my 30s. There were always these lines that came to me where I thought, ‘That’s clearly poetry.’ But at a certain point, these things stopped coming out as lines of poetry, and I recognized that they were instead prose.”

The genesis of George & Lizzie, though, involved the characters simply appearing in Pearl’s mind. “These two characters just came into my head, and I loved thinking about them,” said Pearl. “For several years, I didn’t consider writing anything down. I just told myself stories about them before falling asleep each night.”

Eventually, during a time when Pearl felt an “inchoate longing for the perfect thing to read” -- a feeling all book addicts can likely relate to -- she thought, “Well, I have these two characters in my head, and by that time, I knew everything there was to know about them. What if I put those stories, those episodes and vignettes, down on paper? ... I was really just writing it for me. ... It would be impossible for me to write something where I was worried about whether my agent would like it, or could sell it. You just have to do it for you. And I was lucky because I already knew what I liked in books. I’d analyzed my own reading enough to write a book just for me. It wasn’t until I reached the end that I thought, maybe this is a book, and maybe I should get in touch with my agent.”

George & Lizzie has elements of both a romantic comedy and a domestic drama. The titular married couple first meet as students in Ann Arbor (locals will note that in the opening scene, the two are bowling in an alley on Washtenaw), but they come from vastly different situations. George grew up in a generally happy, loving home, while Lizzie believed herself to be little more than a lab rat for her famous psychologist parents. Her intense desire for love and attention led her to hatch a foolhardy plan: to sleep with each starter on her high school’s football team. And because the “Great Game” continues to haunt Lizzie well into adulthood -- in the form of making her obsess over a college boyfriend who broke up with her upon learning of her past -- George and Lizzie’s marriage eventually arrives at a crossroads.

How did Pearl come up with the racy secret that shadows Lizzie’s life? “The simple answer is, it’s just the way it happened,” said Pearl. “I know this sounds bizarre and very woo-woo -- I don’t have a woo-woo bone in my body -- but that’s just what I learned about Lizzie. This is what she did.”

Of course, being on the other end of book reviews can be tricky for a librarian whose recommendations get a national audience; yet because Pearl has long made a point of only highlighting books that excite her -- rather than critiquing those that don’t -- she’s taking the feedback in stride.

“Everyone brings to a book their own life, their own experiences,” said Pearl. “The majority of reviews and feedback has been positive and wonderful, but the few that have been negative have indicated to me that this is simply not the kind of book this particular reader wanted.”

Other noteworthy things about Pearl include: her master’s degree in history; her oft-quoted Rule of 50, wherein you read 50 pages of a book, and if it doesn’t engage you, you stop reading (“The rule only works well if you know you can always go back to a book. It’s not like not reading it is the death knell for that book forever,” said Pearl); and her insights about the role parents play in their children’s reading life.

“One of the best ways to spend quality time with a child is to read to her or him, and to not stop reading to them when they’ve learned to read,” said Pearl. “Too often, parents stop reading aloud to their children after first or second grade, thinking, well, they can read to themselves now, they don’t need me. But there’s something so special about sharing those books together. I think that needs to be emphasized more.”