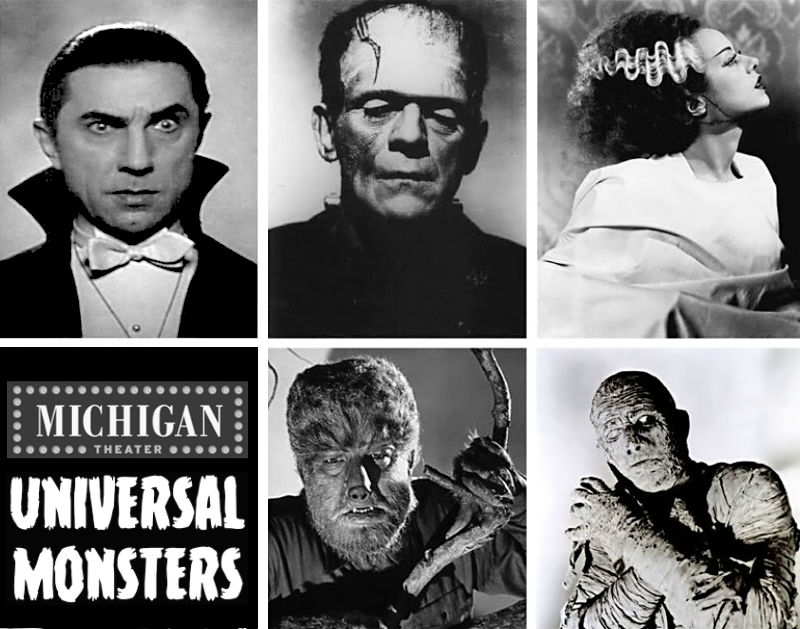 In the '30s and '40s, the most horrific words in Hollywood were "Dracula," "Frankenstein," "Mummy," and the names of the iconic creatures that implanted themselves into the popular culture.

For people who love cinema, an even more horrific word reigns supreme in Hollywood's marketing lexicon today: universe. This is the idea that several movies can be grouped together in order to manipulate ticket buyers into seeing films they might otherwise skip. We have the Marvel Universe (Avengers, Iron Man, Thor) at Disney and the DC Universe (Man of Steel, Batman v. Superman: Dawn of Justice, Wonder Woman) at Warner Brothers, and Universal attempted to launch their "Dark Universe" last summer with the Tom Cruise vehicle The Mummy. Yes, Universal plans to make a series of films connecting their classic monsters.

"Horror movies are about the things that bump in the night," says Michigan Theater Senior Film Programmer Brian Hunter. Looking at Tom Cruise's underperforming Mummy gives us a glimpse of how these classic tales of terror refuse to adhere to modern blockbuster conventions. "There's nothing really creepy about it. It's a Mission Impossible movie with a supernatural storyline," Hunter explains.

Many people who have never seen these black and white classics probably think they actually have. Considering how many movies utilized their ideas and iconography, it's easy to see how these groundbreaking works have been taken for granted by so many. It's not just familiarity that breeds complacency, it's also about these landmark achievements never quite getting their due as classic films, not just classic horror movies. "Up until five years ago there were probably a lot of really terrible prints of these floating around," Hunter says. "What you saw was a scratchy image and a hissy soundtrack that doesn't do the films justice."

The Michigan is showing these films in sparkling new 2K transfers, and Hunter believes they will allow people to discover the richness they possess to this day. Hunter argues that people think they know Bride of Frankenstein because of Elsa Lanchester's definitive updo, but unless you see the film, the inventiveness of the entire project, not just the hair, goes unnoticed. Hunter hopes that the series will show people "how progressive these movies were for the time they were made." From the sexy, predatory seducer of Dracula, to the attempts of science to alter nature in Frankenstein, to the split-personality nightmare of The Wolf Man, the elemental themes these movies address speak to us as clearly as ever.

Sitting in a dark theater, surrounded by strangers, and letting a film play on your dread of the unknown is an experience that no home viewing could replicate, no matter how good the movie. Universal will do its best to drag its most revered titles into the 21st century with the Dark Universe, but the Michigan Theater is giving you the chance to reconnect with the original films' greatness first hand.

If all of that isn't a good enough reason, then by all means see each Universal Monsters classic so that you can appreciate all of the jokes and references in the cult classic The Monster Squad (Oct. 30, 7 pm), which caps the entire series.

Perry Seibert is a movie lover, freelance writer, and founding member of the Detroit Film Critics Society. Follow him on Twitter @Perrylovesfilm.