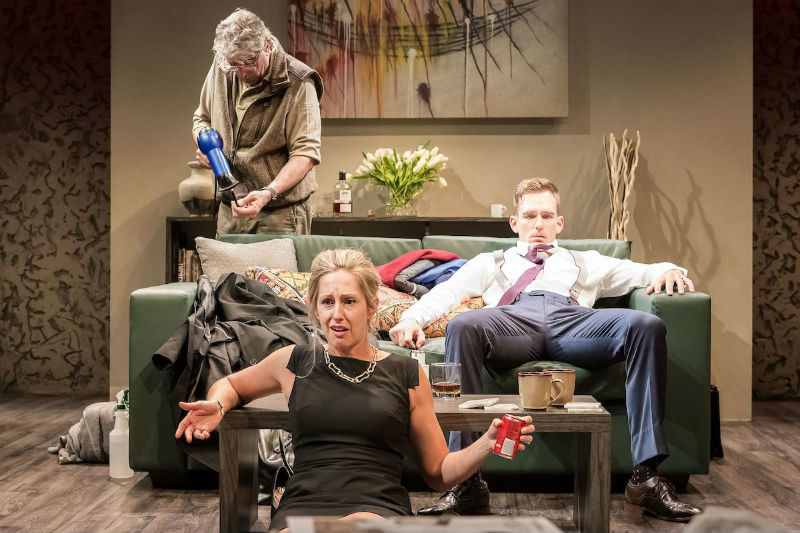 The only real carnage in God of Carnage happens entirely offstage, but the knock-down, drag-out battle of social mores that takes place more than earns the play its comically dramatic title. Yasmina Reza's 2009 Tony Award-winning play, which runs through Dec. 16 at the Purple Rose Theatre, is 70 minutes of one-act, real-time comic chaos as two married couples attempt to reconcile after their sons get into a playground fight.

At the outset of the play, middle-aged Michael (Paul Stroili) and Veronica (Michelle Mountain) welcome the younger Alan (Rusty Mewha) and Annette (Kate Thomsen) to their home to discuss how to proceed after Alan and Annette's son knocks two of Michael and Veronica's son's teeth out with a stick. Michael and Veronica make initial pretensions towards civility, but both couples waste little time rending the extraordinarily thin veils masking their contempt for each other. The meeting quickly descends into a screaming, puking, imbibing melee.

Mewha is the standout among the four leads, physically dominating many of the early scenes by prowling silently upstage like now-President Trump in his infamous second debate with Hillary Clinton. Alan is conceivably the most callous of the quartet, and yet also the most relatable in his brusque clarity on the foolishness of the situation ("Our son is a savage," he admits repeatedly). With his constant cell phone calls interrupting the action and ratcheting up the other three characters' frustration, Mewha is a magnetically ruthless presence.

Alan displays his obeisance to the titular deity right off the bat, but it's also delightful to watch the other three actors as their characters slowly give in to their animal impulses. Stroili's Michael is the most restrained of the group. He slowly stews as Veronica and Alan both belittle him and then finally adopts an entertainingly devil-may-care attitude, guzzling rum and grousing about how his wife "dressed me up like a liberal."

Mountain's Veronica, by comparison, is hilariously over the top. Mountain stumbled over a few early lines on the show's opening night but more than made up for it as her character -- who self-righteously informs the group she's been writing a book about Darfur -- goes off the deep end and starts throwing out F-bombs with abandon. Mountain is pitch-perfect in her hysterical, howling delivery of lines like, "I know all about Africa's martyrdom! I've been steeped in it for months."

As Annette, Kate Thomsen is a bundle of nerves in a power suit, drawing laughs early on merely with her defensive assertion of her occupation ("Wealth management"). Thomsen displays a weirdly flirty energy with Stroili that wisely is never fully played out, but successfully puts the other characters even more on edge. Thomsen also perfectly plays the show's big moment of physical comedy -- if you don't already know what it is, we'll say no more here.

Director Lauren Knox seems to have goaded the actors to perform most of their dialogue at a rapid-fire pace, a choice that yields somewhat mixed results by helping to dial up the onstage energy but also causing many lines to be obscured by the audience's uproarious laughter. Other production touches are excellent. Bartley H. Bauer's set representing Michael and Veronica's upper-middle class Brooklyn living room is furnished with appropriately bland décor, right down to the floor vase of wicker branches in the corner. Shelby Newport's costume design is also excellent, telling you almost all you need to know about the characters from square one. Michael's fleece vest even ends up making for an amusing bit of physical comedy.

However, the production is primarily focused on viciously witty dialogue and high-wire performances, and rightfully so. The show is already short, at 70 minutes, but the terrifically energetic production seems to fly by even faster than that. God of Carnage is a delicious comedy of pettiness, a true war of words with no winners.