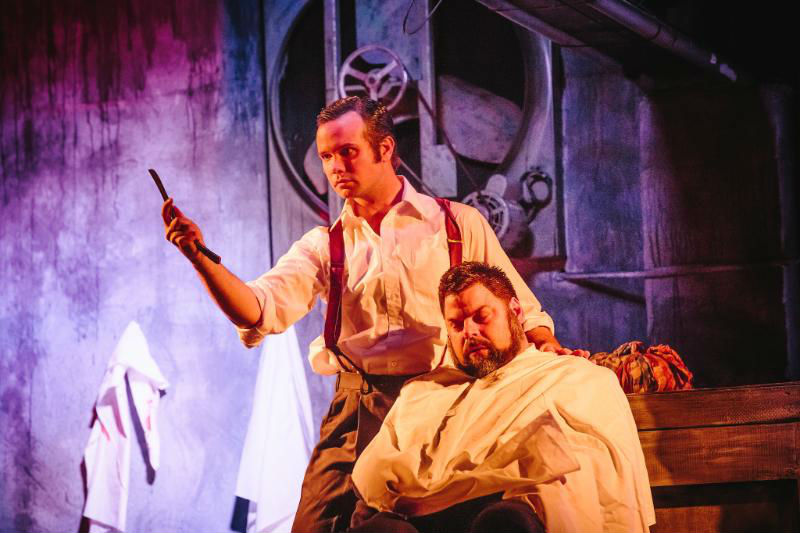 In 2015, I pronounced Into the Woods to be Encore Theatre’s strongest overall production since the Dexter company opened its doors in 2009.

Well, move over, Into the Woods. There’s a new Sondheim show in town, and when it opened on Friday night, Sweeney Todd: The Demon Barber of Fleet Street quickly established itself as the best thing yet to happen on Encore’s modest, black-box stage.

This is largely due to director/choreographer Matthew Brennan, whose distinctive vision makes the classic show, which debuted on Broadway in 1979, into an entirely new theater experience. With seats integrated into the 1940s-era, London factory set -- thus creating an immersive, thrust stage experience -- Encore’s gruesomely comic Sweeney achieves an intensity and an immediacy that’s downright visceral.

With a book by Hugh Wheeler and music and lyrics by Steven Sondheim, Sweeney tells the penny dreadful-inspired story of a wronged man -- a husband, father, and barber -- who was sent to prison 15 years earlier by a corrupt judge. When the man returns to London, now calling himself Sweeney Todd (David Moan), he learns that his beloved wife -- molested by the same judge -- drank poison, while his daughter, Johanna (Emily Hadick), has lived all this time as the judge’s isolated ward. Todd’s mission thus shifts from one of reclamation to revenge, and to this end, he befriends failing Fleet Street meat pie shop owner Mrs. Lovett (Sarah Briggs). For she offers to not only provide Todd with his former barbershop space upstairs but also hatches a mutually beneficial, macabre plan for their success.

Encore’s tech team for Sweeney works in perfect concert. Tyler Chinn’s film noir-like lighting design makes as much use of darkness and shadows as it does blue and red gels, particularly as the show takes its most grisly turns. Plus, atmospheric details aside, one key to the success of Brennan’s in-your-face approach to Sweeney involves using the lights to focus our attention precisely where it needs to be at all times, and Chinn nails this challenging task.

Meanwhile, Brennan’s meticulously plotted, bi-level set design, masterfully executed by Sarah Tanner, allows cast members to venture routinely into all areas of the performance space, so that audience members are almost always mere inches away from the players. Plus, harkening back to Hal Prince’s 1979 production -- wherein pieces from an old foundry in Rhode Island were integrated into the set to re-create a factory aesthetic -- Brennan and Tanner use utilitarian parts of Encore’s performance space, like an I-beam that hovers over Sweeney’s barber shop, as a spot to store his deadly blades, and add subtle embellishments (like an industrial fan and pulley) to the grimy backdrop.

Props like Sweeney’s red blades, and meat shop customers’ red plates, were overseen by Anne Donevan; and Sharon Larkey Urick’s effectively restrained costume design initially employs mostly blacks, whites, and grays in the show’s first act. Yet after Sweeney and Mrs. Lovett make their ghastly pact, they both appear in tones of red, and that color -- through victims’ gushing blood and other means -- becomes a stark signal of the evil overtaking everyone.

Sound designer Chris Goosman helps establish just the right aural balance, and music director Tyler Driskill helms a vocal ensemble that’s among the best I’ve ever heard in this region -- despite the inherent difficulty of spreading cast members across Encore’s space while they’re expected to sing in tight unison.

My one qualm musically involved the production’s orchestra, which sounded, particularly in the first numbers on opening night, tentative and spotty. But the vocalists, from top to bottom, were terrific.

Jamie Colburn gleefully hams up the role of charlatan hair tonic salesman Pirelli, delivering vocally while stealing each scene he appears in. Sebastian Gerstner (Antony) and Emily Hadick (Johanna), as the show’s young lovers, manage to bring sparks of humor to the couple’s usually-generic courtship, and Gerstner’s lovely rendition of the yearning, soaring theme “Johanna” will stay with you long after you leave. The same goes for Billy Eric Robinson’s heartstring-pulling take on “Not While I’m Around,” one of the production’s most moving scenes, wherein young Toby professes his affection for and gratitude to the seemingly maternal Mrs. Lovett; and Keith Kalinowski’s Judge Turpin is humanized by the inclusion of the character’s oft-cut song “Johanna (Mea Culpa)” -- though the scene’s primary action (self-flagellation) feels somewhat murky.

Moan is a younger-than-usual Sweeney, for sure, but his raw, slow-burn intensity, paired with his assured baritone, paint a Fleet Street barber whose rage mostly boils beneath the surface. This choice, alas, turns out to be a bit of a double-edged sword. As with Judge Turpin, Sweeney is presented not as a monster, but as a “normal man” capable of terrible things; and while this psychologically grounds the character in reality and makes us question the assumptions we make about people, it also de-fangs the character, so that the dread and anxiety that normally accompanies his appearance on stage is undercut. In addition, Brennan’s staging choice involving quick throat slashes in the barber shop, followed by each victim descending a set of stairs in a zombie-like fashion, reinforce the odd banality of Sweeney’s murders.

Yet in the end, the Encore production’s main attraction is Sarah Briggs’ hilarious and surprisingly touching breakout turn as Mrs. Lovett. If you’ve seen Briggs in other Encore productions, you already know she’s got serious pipes, and that she could read mortgage documents on stage and somehow make it hysterical, using her ultra-expressive features and immaculate comic timing to maximum effect. But even given that, Briggs demonstrates, by way of Mrs. Lovett, that she can do dizzying complexity, too, so that right after she cracks us up with “The Worst Pies in London” and “A Little Priest,” she makes us feel dreamily wistful via “By the Sea,” and then achingly sympathetic as she processes Toby’s familial love for her in “Not While I’m Around.”

Though Mrs. Lovett is often interpreted through a funhouse lens, Briggs’ humanized Mrs. Lovett feels simultaneously jaundiced and hopeful -- and we do, too. That is all part of taking the ride now on offer at Encore. Brennan’s unique staging makes us part of the Greek chorus of ensemble players, who almost never leave the stage, but it also places actors among the spectators, thus breaking down the divide between performance and artistic consumption. What can we glean from this old tale of obsession and revenge, the production presses us to ask, when we’re witnesses ourselves to senseless violence?

On a day when we’re all grieving and reeling from the worst mass shooting in American history, it seems a question worth asking.