All Wrapped Up: Christo at the Michigan Theater 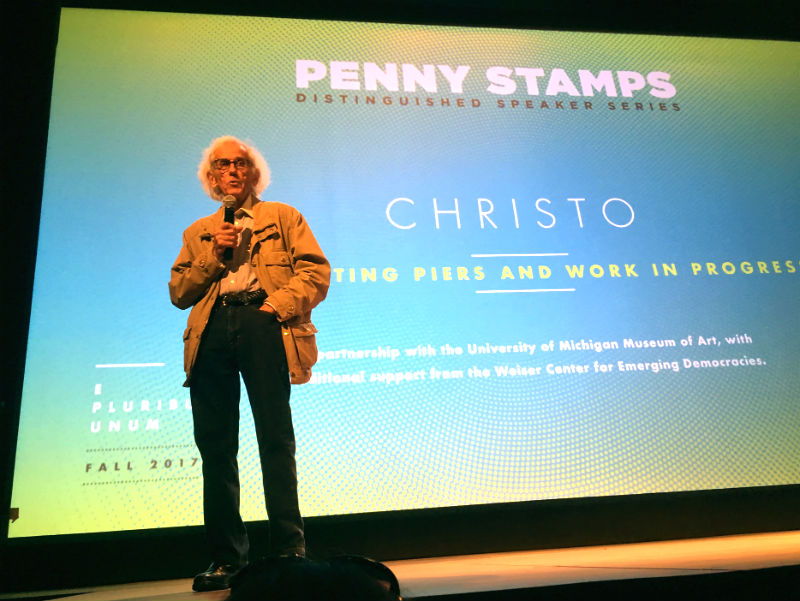 U-M Stamps School of Art & Design hosted mega-famous artist Christo at the Michigan Theater; he told the crowd, "All our projects are totally useless!" Photo by Adrian Deva.

On Thursday evening, world-renowned sculptor Christo, 82, told a huge crowd -- packed into the Michigan Theater to see him -- what might be the best, most succinct courtship story of all time.

Of his longtime partnership with Jeanne-Claude, with whom he collaborated on his massive art installations (and who died in 2009), Christo said, with a shrug, “I was very young, we make love, and we like each other. That’s all.” Moments later, he added, “She was very pretty.”

But Christo -- dressed in dark slacks, a collared white shirt, and a big-pocketed beige jacket that hung off his lean frame -- initially kicked off his Penny Stamps Speaker Series lecture with a few parameters: “I will answer all questions, but I will not talk about politics, religion, and certainly not about other artists. I talk about myself, my work, and anything that I can tell you about my work.”

By way of introduction, Christo shared a series of slides that highlighted some of his most notable, large-scale environmental installations: Wrapped Coast in Sydney, Australia; Wrapped Trees in Riehen, Switzerland; wrapping Berlin’s Reichstag, and Paris’ Pont-Neuf bridge, in fabric; an “iron curtain” in Paris, whereby Christo and Jeanne-Claude built a four meter high road-blocking wall made from oil barrels; Valley Curtain in Rifle, Colorado; the 24-mile-long Running Fence, made from fabric, in California’s Sonoma and Marin counties; the bright-pink Surrounded Islands in Miami; The Umbrellas, in Southern California and Japan; The Gates in New York City’s Central Park; Floating Piers in Italy; and Mastaba, Christo’s planned trapezoidal sculpture, which will be composed of 400,000 oil barrels and appear near Abu Dhabi.

Upon finishing this quick survey of his work, Christo stood on the Michigan Theater’s stage and alternated his attention between two microphones positioned at the head of two aisles, as audience members waited their turn to ask questions like, “How do you pay for your projects?” (by selling more portable and permanent works of art) and “What do you do with the materials after the installation ends?” (he sells what can be recycled).

“I have no stocks, no bonds, no inheritance,” said Christo, noting that he still works in a modest studio with no stool (“I stand 15, 16 hours a day) and no assistant. “I need to sell permanent things to build projects.”

But Christo also noted that one of the most challenging parts of his work has always been getting permission. “Everything in the world is owned by someone,” he said, explaining that although he’s succeeded in executing on 22 projects, he’s failed to get permission on 36 others.

Christo downplayed the importance of the individual elements in his work. “The moment you walk out of your home, you walk on the sidewalk. Someone designed that sidewalk. You cross the street ... someone designed the intersection.” Christo said, citing a parallel between these cross-sections of design and human existence and his installations. “They absorb all the energy of the space, of the people living their daily lives.”

Plus, Christo admitted that surprise was an exciting part of his own experience, in terms of how people interact with his art. “Something happened I never think about "[with the Umbrellas]” said Christo. “People decided to have picnics and stay there for three hours.” 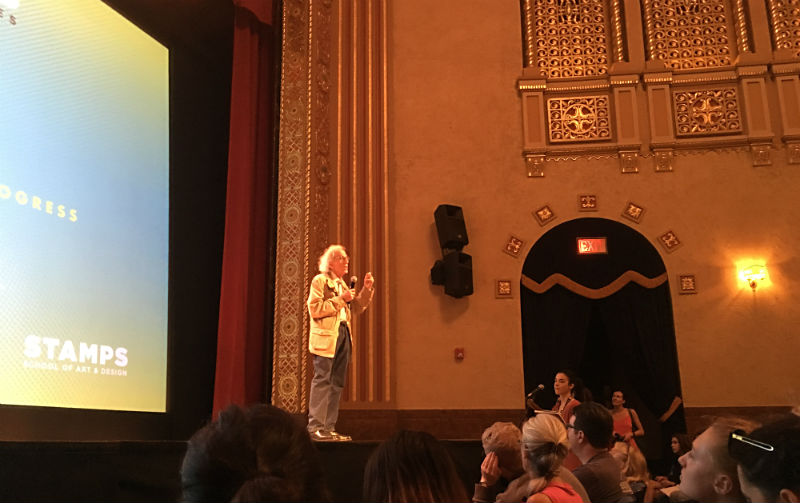 Christo told a U-M Stamps School of Art & Design student that being an artist isn't a job: “You’re an artist all the time." Photo by Adrian Deva.

One audience member who got to visit the Floating Piers -- a 16-day installation -- said she spotted Christo in a nearby boat while she was there. “With all our projects, I like to be all the time there,” said Christo. “We’re on the site and we’re responsible for everything. Around the clock. Cleaning, everything. Security. You say installation too short? I say it’s enough.”

Christo admitted to the Michigan Theater crowd that he does not know how to drive and that he’s not good at talking on the phone. “I do not like virtual things. I like real things. I like to walk in the sun, to be wet, to be cold.”

When a graduating U-M Stamps School of Art & Design senior asked for advice on avoiding creative burnout, Christo said, “You’re an artist all the time. ... It’s not like a job. You need to build something in yourself that you cannot live without. But that is something only you can do. It’s impossible to give advice what you should do.”

Near the end of Christo’s talk, the artist proudly rebuffed a question about meaning in his work (“All our projects are totally useless!”), but he also speculated about why millions come from all over the world to experience it in person, when he’s issued no official invitation to anyone in particular.

“I don’t know,” said Christo. “We always say, once in a lifetime, never again. That’s the most important. We’ll never do the same things again. Never, never. ... People like to see something that will never happen again. ... It’s like how every human is unique in the world. ... And (the projects) happen in a particular moment in our lifetime.”