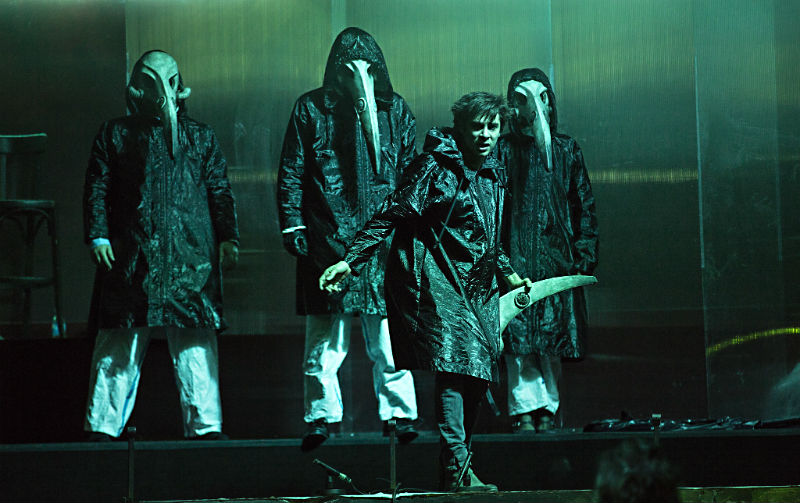 Director Emmanuel Demarcy-Mota and Théâtre de la Ville’s take on L’Etat de siège is a feast for the eyes, but not much can be done about Albert Camus’ ham-fisted postwar tale.

I once spent a summer reading just about everything Albert Camus wrote. Not exactly beach reading, I know -- I jokingly referred to it as “my crazy summer” -- but I’d been hired to write the preface of a book about the French writer’s work, so I dove in.

I hadn’t counted Camus' seldom-produced 1948 play L’Etat de siège (State of Siege) among my favorites of his writings, but I was intrigued that Théâtre de la Ville was staging it. Having seen previous Théâtre de la Ville productions courtesy of University Musical Society (UMS), including Ionesco’s Rhinoceros in 2012 and Pirandello’s Six Characters in Search of an Author in 2014, I was hopeful the Parisian company's past lavish renderings of absurdist classics would nonetheless find a way make Siege sing.

The story begins when a lazy day in the Spanish town of Cádiz is disrupted by the appearance of a comet in the sky. After the townspeople argue about the comet’s status as an omen, the government forbids them from acknowledging what they’ve seen, insisting instead that “nothing is happening, nothing will happen.” This Orwellian bit of darkly comic doublespeak provides a solid opening, but narrative momentum and energy flag beyond this point.

When human versions of The Plague (Serge Maggiani), a stand-in for tyranny, and his secretary Death (Valerie Dashwood) appear and threaten the town’s Governor/denier-in-chief (Pascal Vuillemot), the Governor retreats with his family in tow, and the menacing pair takes over Cadiz. With a new, efficiency-focused bureaucracy in place, bodies start piling up -- quite literally, as actors toss dummies onto the stage with a sickening thud -- and the living must register for “certificates of existence.” But young lovers Diego (Matthieu Dessertine) and Victoria (Hannah Levin Seiderman) resist, eventually leading the townspeople to discover the most powerful weapon in their arsenal: courage. 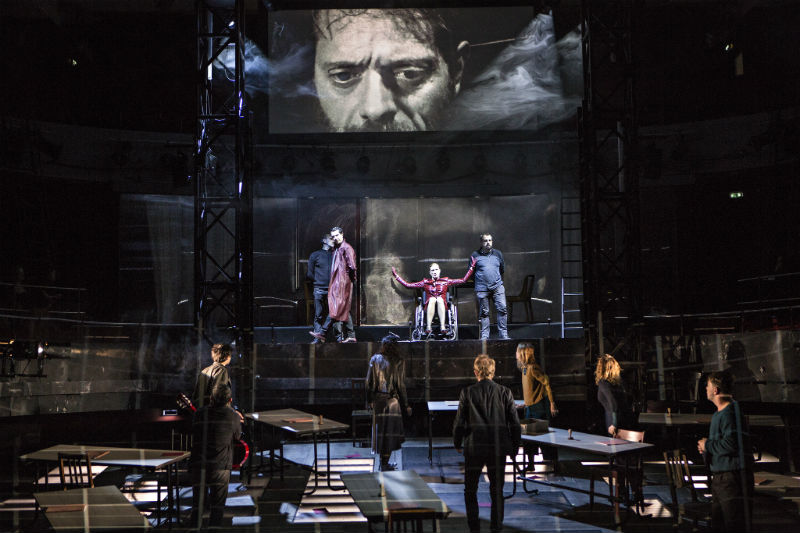 Théâtre de la Ville’s Siege is performed in French with supertitles above and at both sides of the stage. As was true for the company’s two previous productions in Ann Arbor, the temptation to watch the actors closely and absorb the production’s lush staging elements clashes at times with the necessity of relying on the projected supertitles to understand precisely what’s unfolding between characters. While this adds an extra layer of difficulty, it wouldn’t by itself sink a show. No, that happens mostly by virtue of the play’s spark-free blueprint (Camus’ script), combined with our current political climate.

On paper, there would seem to be no better time in recent history to present a play about the threats of tyranny -- how humans repeatedly enable its existence and rise, and the necessity for resistance. But the hard truth of the matter is that many of us feel so psychically beaten down at this point that watching two relentless, bleak, intermission-free hours of what now seems “the new normal,” depicted on stage, just feels like piling on. Plus, despite the presence of the defiant young lovers at the story’s fulcrum, the play lives in the world of allegory, so they are broadly drawn types, not flesh-and-blood individuals we might emotionally respond to. In the end, a cerebral play that stirs no feelings is sharply limited in its capacity to provoke and inspire.

That said, director Emmanuel Demarcy-Mota’s production does once again provide a sumptuous feast for the eyes. Set designer Yves Coliet uses a raised, slanted floor to great effect, particularly when a rising threat creepily emerges from beneath light reflecting, stage-covering tarps. In one sense, the production’s bi-level backdrop feels bloodlessly industrial, with scaffolding, ladders, plexiglass panels, and a set made to look like it was wrought from steel. But light-up floor panels, some of which are raised and lowered, paired with Collet and Christopher Lemaire’s haunting lighting design, give the production its unsettlingly supernatural vibe.

Sound designer David Lesser has atmospheric, menacing music undergirding much of the action, and the actors often sound like the last people living in this post-apocalypse world. Meanwhile, costume designer Fanny Brouste most notably decks out Death in reptilian, blood red business attire -- and Dashwood visually pops in every scene she’s in as a result -- while Brouste’s dark raincoats, paired with Anne Leray’s masks, eerily transform townspeople into nightmarish, long-nosed, Twilight Zone-dwelling rodents.

By show’s end on Friday, I felt as though Théâtre de la Ville had, from a production standpoint, done pretty much everything it could with Camus’ ham-fisted postwar tale. But it was hard to escape the sense that while the production aims to be a call to arms against tyranny, it ultimately lacks a beating heart, or a point of genuine human connection -- which is what we probably need now above all else.