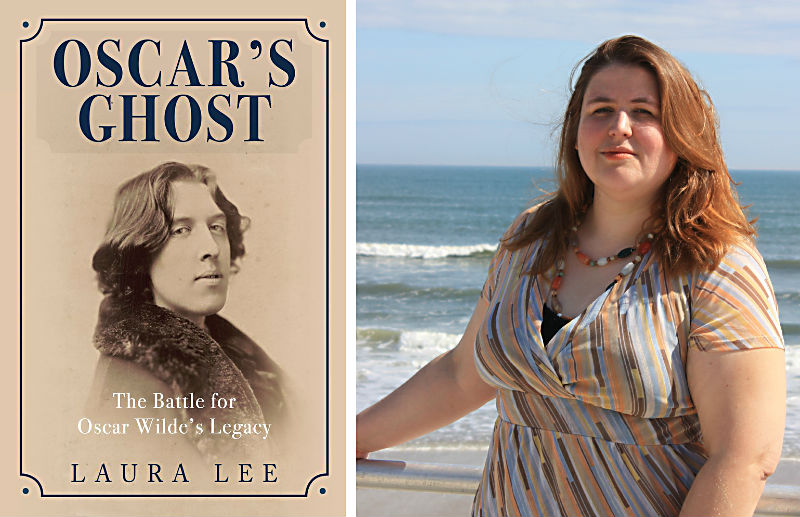 Oscar Wilde said the truth is rarely pure and never simple. These words apply to many facets of his life, including the feud between Wilde’s lovers Lord Alfred Douglas and Robert Ross. Laura Lee set out to find the truth of what happened between these men after Wilde’s death in her new book, Oscar’s Ghost: The Battle for Oscar Wilde’s Legacy, which she'll discuss at AADL's downtown branch on Tuesday, Oct. 17.

Douglas and Ross each blamed the other for Wilde's downfall and early death as well the way the latter handled Wilde’s prison manuscript, De Profundis. Their feud escalated to include stalking, blackmail, witness tampering, prison, and lawsuits.

“When I first got a Kindle, I downloaded and read (Wilde’s) De Profundis," Lee says. "I discovered that this was actually an edited version of the book and that a longer version existed.”

Written while Wilde was in prison for “gross indecency,” De Profundis was intended as a letter to Douglas. After Wilde’s death, Lee says, his literary executor and former lover, Ross, edited portions of the book to take out personal parts: “There were pointed recriminations against Douglas, and I wondered what had happened between these men and why Ross wanted to remove parts of the book.”

Lee dove deep into research about both men: “I read biographies about Douglas and Ross and found that most of what was written was very partisan, with existing books taking the side of one or the other. I wanted to tell the story more evenly and figure out the truth.” This led to the six-year journey that resulted in Oscar Wilde’s Ghost.

To understand the rivalry, one must understand the passion between Wilde and his lovers, which the book explores. Ultimately, both men wanted to be the ones to frame Wilde's legacy after his death.

During research, Lee uncovered another player in the complicated relationships of Oscar Wilde: a man named Maurice Schwabe. Schwabe and Lord Arthur Douglas were lovers and the two wrote passionate letters to each other. These missives somehow ended up in the hands of an Australian police officer who donated them to the library. Lee’s research into Schwabe indicated that he was involved in an international circle of men who would travel on ships, meet aristocrats, and con them at games of cards and in other ways. Lee, the author of 20 books, is now trying to sell a book about Schwabe and his influence on the life and trial of Oscar Wilde.

While Wilde is certainly known in America, he is a “huge figure in England” and this led Lee to work with the U.K.’s Amberely Publishing for Oscar Wilde’s Ghost. “I was writing in ‘British English,’" Lee laughs, "which added a layer of complexity to the process.”

Ultimately, Oscar Wilde’s Ghost can be enjoyed by fans of Wilde and newcomers to his life and work. “Originally, I tried to write the book for someone who knew nothing about Wilde,” Lee says. “But it came out about 100,000 words longer than the publisher was expecting, so I had to focus in a bit more and assume some prior knowledge. ... There is still background information in the introduction for people who may not know much about Wilde.” And for longtime fans and Wilde experts? Lee says, “I hope I dug up some things that they didn’t know.”

Lee adds, “The mythology of Wilde was created in part of Wilde himself and in part by this feud between Ross and Douglas who were left behind, each dealing with their own grief and guilt and the desire to control not only his story but their own life stories. In the process, they created a lot of what we know about Oscar Wilde today.”

As the man himself said: The truth is rarely pure and, as Oscar Wilde’s Ghost points out, never simple.