After threatening retirement, folk legend Tom Paxton rambled back to The Ark 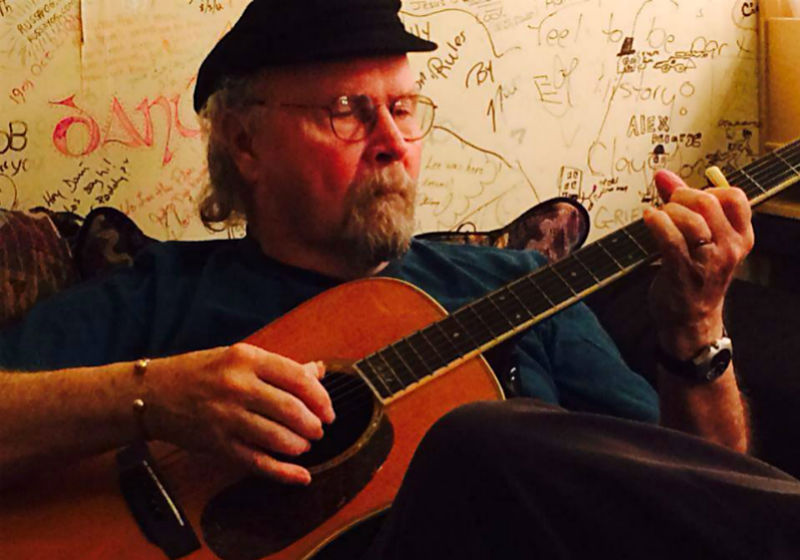 When Tom Paxton played The Ark two years ago as one of the final stops on what was advertised as his national farewell tour, it was hard to believe that he’d really retire. Yes, he had just turned 78, had been writing and performing his songs for nearly 60 of those years, and had earned the right to get off the road. But he still looked like he was having a good old time on stage, his voice sounded great, his guitar playing was as clean and crisp as ever, and he had a new CD of his recent songs.

Yes, he did say he was sick of airports, but was that reason enough to stop touring? Apparently not.

Like the Energizer Bunny, Paxton has kept going and he returned to The Ark again on October 13 with a couple of new collaborators, The Don Juans, some new songs, and even plans for the foreseeable future.

Paxton has been a major force on the national and international folk scene since the 1960s, and has written memorable songs in every one of the six decades since then. “The Last Thing on My Mind,” “Ramblin’ Boy,” “The Marvelous Toy,” and “Bottle of Wine” -- and those are just from the '60s! In the following decades Paxton wrote protest songs, songs about the environmental movement, love songs, and children’s songs. In 2009 he received a Grammy Lifetime Achievement Award, and earlier this year he released his 63rd recording, Boat in the Water.

Paxton has collaborated in performance and on recordings with a number of people over the years and he brought his latest musical partners with him to The Ark. The songwriting/ performing duo The Don Juans -- Don Henry and Jon Vezner -- are no Johnny-come-latelies to the field. Their song “Where’ve You Been?” recorded by Kathy Mattea, Vezner’s wife, won a Grammy Award in 1990.

At The Ark on Friday night, The Don Juans opened the show by welcoming the audience and joking, “It’s great to see you here. It would feel a lot different if you weren’t.” and continued with comedy about why they were both playing ukuleles -- because they wrote a lot of their songs while driving and couldn’t fit Jon’s piano in their car -- and about their group name, “Don and Jon -- The Don Juans, get it?” then launched into “It’s Love,” a silky smooth ballad that managed to simultaneously showcase their lyrically clever, melodically pleasing songwriting, their tight tenor harmonies, and solid instrumental musicianship. I’m not normally a fan of opening acts, they’re often so much weaker than the headliner that I feel impatient; not so here. These are two accomplished pros and I could feel myself and the audience relax into their music. Their fourth song was “Where’ve You Been?” and it earned the long, warm ovation that followed it. But the enthusiastic response increased when they followed that by bringing Paxton out on stage, and the entire audience was singing along by the second line of his 2008 song “How Beautiful Upon the Mountain.” This was clearly a crowd who knew and loved Paxton’s work and was happy to hear his familiar songs as well as enjoy brand new ones such as “Boat in the Water." “Let’s get this boat in the water / with the oars where they ought’re / We’ll row down this river to the sea / Let’s sail off in the sunset to some place we ain’t been yet / just to say that we’ve been there, you and me.” It’s a chorus that’s quintessential Paxton; clever, childlike, funny, with levels and layers of meaning. By the second repeat we were belting it out like sailors singing a sea chantey.

The trio’s rendition of “Whose Garden Was This?,” which Paxton wrote for the first Earth Day in 1970, was particularly moving, with tight three-part harmony and Vezner’s piano and Henry’s tasteful guitar supporting. Paxton ended the first set by urging people to buy their CDs since, he said, “Christmas is next Thursday.” He then sang “Bottle of Wine” after introducing it by saying, “An old, old song that some of you got up to some mischief with back in the old days. It was either on your lips or in your hearts.”

When they returned after intermission, each was still sporting the distinctive hats they wore in the first set: Henry in a black top hat; Vezner with a tan Gatsby-style newsboy cap; and Paxton wearing his signature black captain’s hat. But the mood turned more reflective, with Paxton sharing songs and stories about important people in his life and career. He told of Mississippi John Hurt, the great blues guitarist he first met at the 1963 Newport Folk Festival, and of Pete Seeger, who Paxton praised as the father of modern day folk music, and who he approached in 1963 and asked if he would listen to a new song of his. A week later Pete sang that song “Ramblin’ Boy” at The Weavers reunion concert in Carnegie Hall.

Paxton also told stories and sang a song about his longtime friend Dave Van Ronk, which he ended by singing in a very credible imitation of Van Ronk’s raspy, guttural vocal style. It was a vivid mini history lesson about the '60s by someone who lived it and helped create it. And to lighten the mood, they mixed in The Don Juan’s contribution about people long gone with their kooky, spooky, minor-key nod to Halloween, “The Garden of the Dead.”

The set ended with "Ramblin’ Boy," a song Paxton has probably sung in every one of his many thousands of concerts over the years, and one that neither he, nor his audience seemed a bit tired of. The standing ovation was immediate and sustained. The encores were two brand new songs the trio wrote together: “What’s So Bad About That!,” a tongue-in-cheek look at climate change from the point of view of a non-believer, and then “Dream on, Sweet Dreamer," a gorgeous waltz lullaby.

Paxton will turn 80 at the end of this month, and he and The Don Juans have a bunch more dates left on this tour and will continue touring in Europe next spring. And we can hope they will return here again. As they sang in their last song, “May your waters be calm and your future be bright.”