They Did It: Nearly 4,000 Rosies riveted down the world record 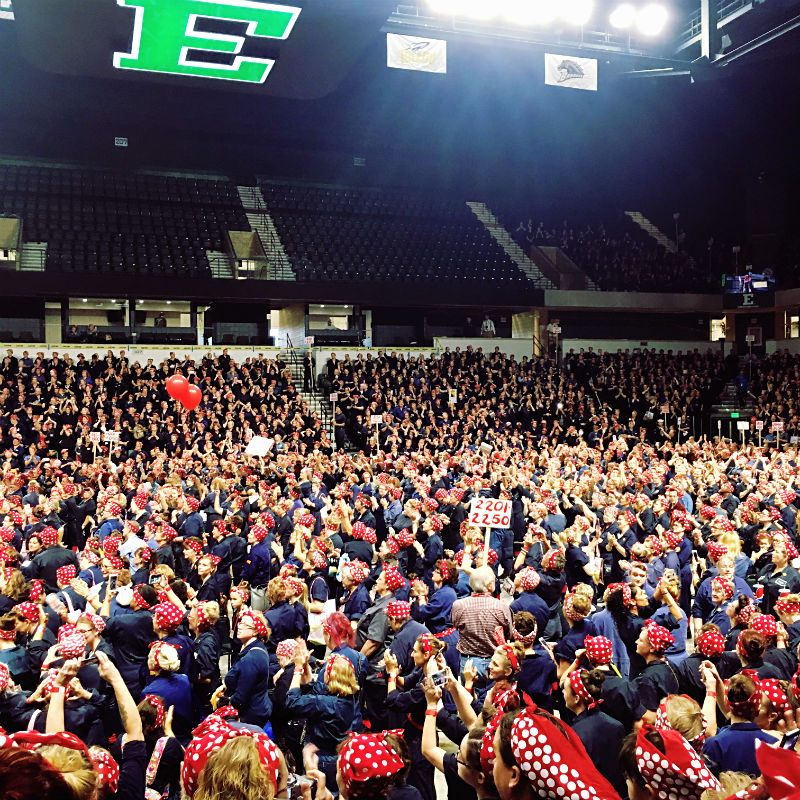 A gathering of 3,755 Rosie the Riveters in Ypsilanti smashed the previous record of 2,229. Photo by Sherlonya Turner.

I was on a bike ride with a friend when he told me about the Saturday, Oct. 14, attempt to reclaim the Guinness World Record for the biggest gathering of women dressed as Rosie the Riveter. My knee-jerk response was that this wasn’t my scene. I’m not a fan of crowds, and more specifically, a bunch of women coming together at the Eastern Michigan University Convocation Center to dress up like Rosie the Riveter was definitely not my scene. Rosie the Riveter is a representation of the women who worked in factories during World War II to support the war effort. The character is based on several people, including Rose Will Monroe, who worked as a riveter at Ypsilanti's Willow Run Aircraft Factory building B-24 bombers. But Rosie's didn’t resonate with me personally. I come from Southern black stock, and the women I am descended from always did some sort of work, primarily domestic, outside of their homes, paid or otherwise. Also, it’s in my nature to take icons and popular narratives and complicate them; it’s what I was taught as a history student, and it has become second nature. I didn’t think that there was anything here for me. However, my friend’s prompting had given rise to a question, “Who are these women. Whose scene is this?”

Overheard: "I’m already getting hot flashes." The participation requirements for this event were quite specific to be a part of the official count: one needed to wear dark blue work clothes, red socks, work boots, and the iconic red bandana with white polka dots. I had collected these pieces one-by-one once after I decided to attend the event but had left the bandana until the last minute. As a result, I was at the fabric store the morning of the event. The store had run out of the right fabric for the bandana. However, the woman at the cutting counter had an idea, and I left the store with a plan to creatively to create the headpiece that would pass the costume bar. “We can do it.” The first time I truly understood the magnitude of this event was when I pulled up to the EMU's Convocation Center. Hewitt Road was quite backed up as participants sought parking as a well-populated parade of Rosies walked toward the venue. I realized that I would have better luck returning home and riding my bike there. Overheard: "Next one, they’re gonna have to rent out the Big House." As we lined up waiting to be led into the auditorium, I found myself near a particularly friendly group of women. I asked them why they had decided to attend the event. One of them had participated because her friend asked her to. It was the friend’s birthday and this woman said that she “would do anything for her.” Another woman answered, “I was a jet mechanic for the Navy. I figure Rosie opened the door for me. “ Inside, there were wall-to-wall Rosie the Riveters. For a tightly packed crowd, the area was calm; people played nice in the close quarters. As folks did their best to navigate the space, I took a gentle elbow to the breast. Here, I wasn’t even worried about it, which was a liberating experience. I looked around and watched women and girls in the space, dressed alike but living their individual lives. A mother offered her young daughter some lipstick as a part of the costume. The daughter declined emphatically. I watched people buy concessions; there’s something jarring about watching someone in this particular costume eating nachos. A young girl clutched her Rosie the Riveter doll. It turns out that there were people in that crowd as young as 6 months and as old as 110. 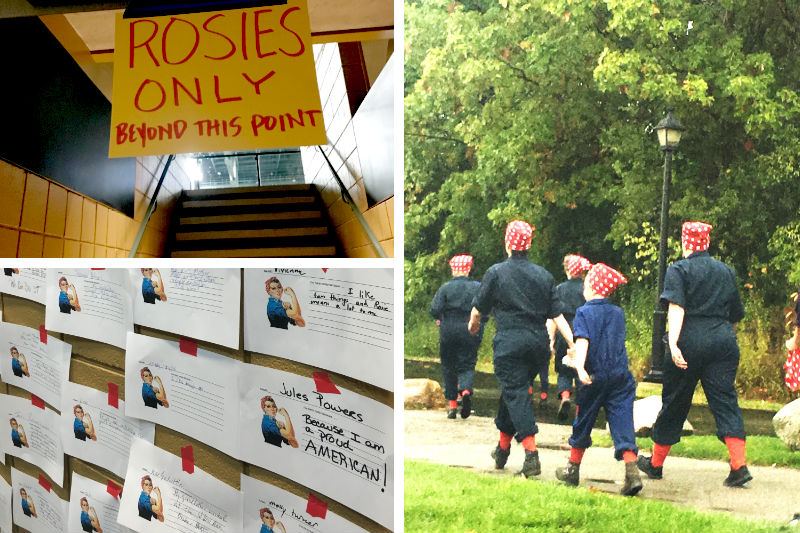 They did it. Photos by Sherlonya Turner.

Overheard: “You’re a part of history whether you realize it or not.” Rosie the Riveter means different things to different people. For the UAW Local 50 representative that addressed the crowd, it is related to her work. She pointed out that UAW organized Ford Motor Company in 1941 and that the ads recruiting people to work in the factories advertised equal pay for women performing these tasks. In the stands, I heard a woman tell her daughter, “Grandma wore clothes just like this and went to the Bomber plant.” As the Rosies were counted and more people filed into the auditorium space, a small movie about the history of Rosie the Riveter played. Here, we saw Norman Rockwell’s interpretation of this character as published on the cover of The Saturday Evening Post in 1943. A pair of nearby women discussed how strong she looked, how working in the factory must have been a workout. A beach ball was tossed around on the main floor. Someone started the wave, which made its way around the crowd a few times. One of the original Rosies spoke to the audience. Among the murmuring crowd, it was difficult to pick up all the 96-year-old said, but she encouraged young women to follow their dreams: “If you really want to do something, don’t let anything stop you.” Then we serenaded her with a chorus of "Happy Birthday." It was 12:51 when, from the stage, the audience heard the announcement that we had, indeed, broken the record. Overheard: "It was an experience, but I don’t think I’d do it again." U.S. Representative Debbie Dingell, another Rosie, addressed the crowd. She talked about the good-natured Michigan-California competition that brought us all there that day and led the group to say together, “Willow Run loves Richmond, but Willow Run wins.” Dingell said she's looking forward to sharing the video with her California counterpart. Dingell also told the crowd that Ypsilanti had previously set the record for having the largest number of original Rosies gathered in the same place. As we got closer to the official end of the event, we were led in a communal display of patriotism. First we sang "The Star-Spangled Banner," followed by "The Pledge of Allegiance" and "America (My Country, 'Tis of Thee)." Finally, the group sang "God Bless America," a song that I didn’t learn in school. I considered how these songs, these symbols unite us and divide us. When all was said and done, the crowd, which included people from 18 states, was counted at 3,755, handily defeating the previous record, 2,229. A girl who appeared to be around 12 years old patted a younger girl about half her age on the head and said, “We did it!” I realized, that on this day that I was one of these women.